And this fellow viewers is what we are up against.   This passes as smart and witty for the radical right wing.   This is the result of the hate spewing from elected republicans.   They are driving this.   This must not be acceptable to do.  Thank you DeathSantis and other republican governors driving don’t say gay bills.   I don’t know how to stop him and those like him who are so sure they are in the right and can force everyone to do as they demand.   They have a right to make others act like they want them to, it is their freedom to tell you what to do and your freedom is to obey them.    After Putin pushed a law making any positive mention of gays in public illegal, thugs rounded up gay men or men thought to be gay and tortured them in horrible ways and dump them on the streets.   Now it is happening in the USA.    I am really fed up the last few days with this shit.   Hugs 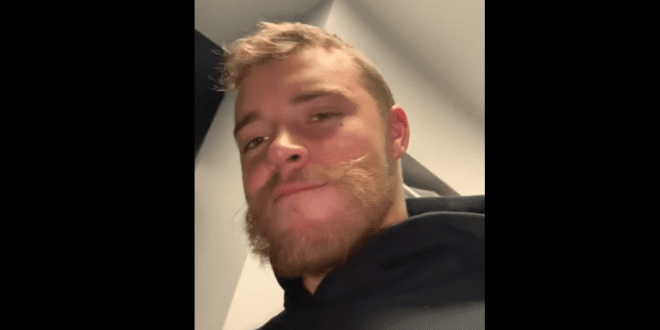 A total loser known for filming himself harassing retail employees was back on his bullshit by hectoring workers at a PetSmart.

The total loser filmed his encounter, in which he asks an employee – who is likely making the minimum wage or slightly above – about a pride flag decal displayed near a register.

“I’m just curious – what is that flag right there?” the demented dirtbag asks a cashier, knowing full well what it is. The talking pustule then claims the flag stands for “pedophilia” and demands, “Respect your customers.”

That’s all the setup you need. Just watch the first clip.

Ethan Schmidt last appeared on JMG last month when he was arrested after menacing abortion rights protesters with an assault weapon.

Schmidt previously appeared on JMG when he harassed cancer patients at a wig store for wearing masks.

In January, he was banned from the Arizona Capitol after harassing a black lawmaker, saying that his mask was a “slave muzzle.”

Earlier this month he was detained after his group harassed abortion rights protesters and his accomplice was arrested for assault.

According to the Tucson Sentinel, Schmidt is currently awaiting trial for DUI. In a video posted to Reddit, Schmidt can be seen flaunting his ankle monitor.

PetSmart manager stands up to Kari Lake supporter Ethan Schmidt, kicks him out of the store for harassing employees over a pride flag. pic.twitter.com/YGvFMG4cU9

Kari Lake has appeared in an Ethan Schmidt promotional video and refuses to denounce him. pic.twitter.com/lGNU7f0GTw

Kari Lake refuses to publicly denounce Ethan who is now stating he will “hunt LGBT supporters” at Target and across Phoenix. pic.twitter.com/FB9Ue831G9

And when he shoots up a store everyone will act perplexed.

Given the brains he’s exhibited thus far, it’ll probably be a kevlar store.

Someone needs to ask him why Christians have such dirty minds.

Religious people really have proven themselves to be child molesters and rapists and it is independently verified by centuries of testimony, lawsuits and settlements.

Ask any law enforecment person or prosecuter what gay organization, event or subculture is behind the most child molestation arrests and 100% of the time theyll tell you that the #1 place children are groomed and molested is in churches!

Time to restrict his movements. His ankle monitor should keep him indoors in his home at all times.

Good on the Store Manager.
Long past time these bigots are called out and treated like the scum of the Earth that they are.

“Shame on Petco,” says the dolt.

“This is PetSmart,” the employee tells the mouth-breathing maniac.

Awe, he was offended.
Bet he wasn’t offended when his Orange God visited a prostitute while his wife was home with taking care of their baby.

The store has every right to call the police in a case like this. Especially if the idiot refuses to leave.

These are bullies looking for an excuse to pretend to be virtue warriors. They need some kind of legal accountability that hits hard.

This bigoted dolt can film himself harassing employees inside a store, but people can’t peacefully demonstrate outside a restaurant where Brett Kavanaugh munches on his dinner.

The first guy should have been more assertive and the policy should just be to automatically call the police.

3 thoughts on “PetSmart Manager Stands Up To Anti-LGBTQ Troll”