I want to credit every republican in office who makes a point to use minorities as a target and every right winger who supports those racist bigots, this is what they sowed, and we will suffer with what they reap.  These thugs claim they are worried about the children but think how traumatized the kids must be by these men screaming and cursing them and their parents?  Why is the parents’ rights to take their children to these story hours not respect as much as maga right wing parents who want books banned from libraries?    Funny how that works, they have the freedom to tell you what to do and you have the freedom to do what they tell you.  Hugs 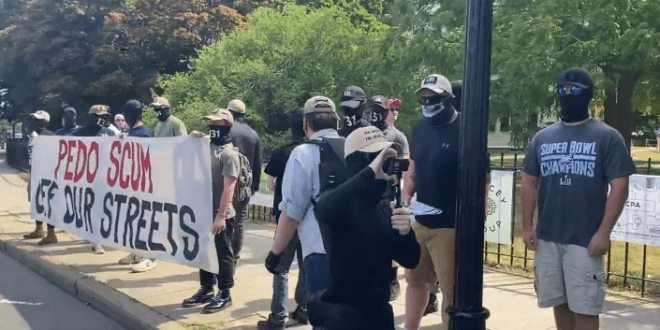 A member of a white supremacist group and two other people were arrested Saturday in the Jamaica Plain neighborhood of Boston as they marched and chanted during a meeting of LGBTQ community members.

City officials said the group, National Socialist Club or NSC-131, was protesting during a drag queen story hour event at the Loring Greenough House. Suffolk County District Attorney Kevin Hayden confirmed Chris Hood, founder of the group, was one of the people placed under arrest.

The National Socialist Club is considered a neo-Nazi group by the Anti-Defamation League. The group has chapters in all six New England States. They say their goal is to create a network of white men, who are willing to fight against the extinction of their race.

Witness video of the self-proclaimed Neo-Nazis shows the group of white men wearing hats standing behind a banner that said, “Pedo Scum Off Our Streets.” Police ushered the children out of the book reading and away from the group of white supremacists. Counter-protesters later approached the men.

Boston Police say 23-year-old Christopher Hood, the leader of the NSC-131, and a counter-protester, 27-year-old Seth Rosenau, were arrested after assaulting one another. The fight was broken up by officers. Both were charged with affray and disturbing the peace, and they will both be in West Roxbury Court on Monday.

“We are prepared and will not be intimidated in our work to make Boston a city for everyone,” Mayor Michelle Wu said. “We remain ready for citywide deployment of extra public safety resources with a zero tolerance approach to any groups looking to intimidate or harass residents in our city.”

Suffolk District Attorney Kevin Hayden called it an “organized white supremacist action” and said Boston was a “way point in the crusade of hate” launched in Charlottesville, Virginia five years ago during the infamous “Unite the Right” rally.

“The presence of white supremacists at a Jamaica Plain book reading today, like their downtown Boston march earlier this month, is at once a disgrace and a warning,” Hayden said in a statement. “Society everywhere is targeted by these groups, and society everywhere must reject them.”

It happened again. White supremacists hit the streets of a Boston neighborhood.

This time they focused on an LGBTQ+ community event. @wbz https://t.co/lQV7HiYxrg

#US:Boston police arrested three men after a group of masked men chanting the name of neo-Nazi group #NSC131 demonstrated outside a historic mansion in Jamaica Plain where families had gathered for a children’s drag queen story hour https://t.co/U934yUVS7F