Skip to content
I want to point out a few things to those who are thinking that women / girls shouldn’t have “people with penises” in their locker room or bathrooms.   Let’s take bathrooms first.   I bet in the 1960’s there was a lot of talk that white women did not want black women in their bathrooms.  All the black women wanted to do was use the facilities not have a social meeting, same as trans people now.   They just want to use the facilities.    We learned back in this time that separate was not equal.   As to locker rooms the same argument applies, but not so much.   I don’t know how modern locker rooms are set up, but they can be reasonably private.   Showers can be smaller single occupancy showers.   But that overlooks the fear and terror installed in people, kids and adults, of the human body.   I told how one kid at the SDA church boarding school I went to was so scared of the “private area” that he would only shower when very few people were around and only with his underwear on.    That kind of teaching about body parts is harmful and stupid.   In European countries there is not a hang up or fear of the human body, kids are taught at an early age what is what, where it is, and how to be respectful of it.   The responsibility is not all with the girls either, teen boys are taught how to respectfully hide or manage an embarrassing erection.  But to locker rooms, what are you people doing in there, having a measuring contest of sex organs?   You seem to forget the gay and lesbian kids in the room, do you think they are getting their thrills by being there.   No way.    A couple of boys used to clown around to hide their nervousness but really the truth was back in those days most of us hurried to change our clothes and get ourselves covered.   I think we were all afraid we did not measure up to what we though men were supposed to be done there.    I think that what is bothering the parents is other than the super religious families, the young people / minors are no longer embarrassed and ashamed over the body.  They have been taught acceptance and no body shaming.   That is why the red states are desperate to change acceptance in schools, to implement the now say gay and anti-trans bills.   They want the kids to be ashamed and fearful over the human body.   They don’t want sex education because they want the kids clueless and ignorant about body rights of who can touch them and how NOT to get a pregnancy they now cannot abort.    Kids can be taught to use the bathrooms / locker rooms without having orgies.   Look, in my day teachers had to break up the occasional fight, I am sure teachers can stop any kids from outright display of their genitals.   Think of this in the hospital we used curtains on a track in the ceiling for privacy.   They can be off the ground so teachers can make sure kids are not in there playing with each other.   Easy single person solutions for adults and kids, if privacy means that much to you pull the curtain.   This is about making trans people scary and the enemy.  They are not.   They are not there to attack others.  With kids they are either required to have PE class or they simply want to play a sport.  This is about saying anyone with a penis cannot control themselves.      Hugs

The complaint filed Thursday by the Human Rights Campaign asserts that a state law preventing transgender students from accessing school facilities consistent with their gender identity violates their constitutional rights.

Story at a glance

The Human Rights Campaign (HRC), one of the nation’s largest LGBTQ+ rights groups, is suing the Tennessee Department of Education and its commissioner over the enforcement of a state law barring transgender students from using school facilities like restrooms and locker rooms consistent with their gender identity.

The lawsuit filed Thursday in federal court alleges that the law, signed by Tennessee Gov. Bill Lee (R) last May, singles out transgender students for “disfavored treatment” and violates rights guaranteed to them under the U.S. Constitution and Title IX, which prohibits sex-based discrimination in federally funded education programs. The U.S. Department of Education last year said the policy protects students from discrimination based on their gender identity.

The law, officially titled the Tennessee Accommodations for All Children Act, requires state public schools to provide “reasonable accommodation” for students who “will not or cannot” use a gender-specific facility.

Under the measure, a “reasonable accommodation” does not include access to a restroom or changing room that is “designated for use by members of the opposite sex while persons of the opposite sex are present or could be present.” In this case, “sex” is defined as a student’s sex assigned at birth, which the law argues is immutable.

The Human Rights Campaign Foundation, the educational arm of the HRC, filed a similar lawsuit against the Tennessee law last year, but that case was dismissed in February after both plaintiffs and their families decided to move to another state.

According to the lawsuit, the girl, identified pseudonymously as D.H. to protect her identity, had previously been permitted to use the girls’ restroom at school for in-person events while engaging in distance learning in 2021.

Once D.H. returned to the classroom earlier this year, she was barred under the Accommodations for All Children Act from using facilities aligning with her gender identity and made to use a single-occupancy restroom which reportedly has on more than one occasion been covered in human waste.

“These restroom ‘accommodations’ provided to D.H. by the elementary school are not accommodations at all,” the complaint states. “They reinforce the differential treatment and trauma associated with living under the [Accommodations for All Children Act], violating D.H.’s constitutional and statutory rights.”

In a statement on Thursday, HRC Litigation Director Cynthia Cheng-Wun Weaver called state lawmakers that backed the law “power hungry” and accused them of supporting the legislation to ignite their base.

“It is unfortunate that Tennessee lawmakers are using their authority to attack some of our nation’s most vulnerable – our children,” she said.

D.H.’s mother, identified in the suit as A.H., said she felt ashamed to live in an area so hostile to transgender young people.

“Years ago, I chose to move to Tennessee because it was known as ‘the volunteer state,’ whose citizens cared for their neighbors without hesitation – not a state that legalizes discrimination against helpless children,” she said Thursday. “Now, I am embarrassed to say that I live in a state that refuses to see anything beyond my child’s gender.”

“By filing this lawsuit, I am showing my volunteer spirit – because I’m fighting to not only affirm my child’s existence, but also the thousands of transgender and nonbinary children who live in Tennessee.”

Neither the Tennessee Department of Education nor Williamson County Schools immediately responded to Changing America’s request for comment.

The Republican Party and its Religious Right puppet master are targeting the trans community because, sadly, to do so is a winner for them. Most Americans know shit about trans people and their lives.

The Republicans and the preachers can rake in millions of dollars — and motivate their voters to go to the polls — by playing on the fear and ignorance out there.

I transitioned in 2003 and while it was bad then in some ways it’s worse now.

I’m so tired of being a target.

I started my transition shortly after you did, and while overall things have improved, the far-right nutcases and religious zealots have decided we are a convenient scapegoat, as their previous attempt (trying to scapegoat homosexual people) mostly collapsed (but they are trying to resurrect that garbage too). As much as all of us are beyond fucking tired of the bullshit they continue to spew, and tired of being targets, we need to stay strong and show the world that the hate-mongers are nothing more than delusional liars. I’ll keep standing with you April.

Ditto drag queens. All of them are icky perverts that exist only to molest children. No mention ever of the actual child molesters that, more often than not, are youth pastors or otherwise in the employ of christianity Inc. 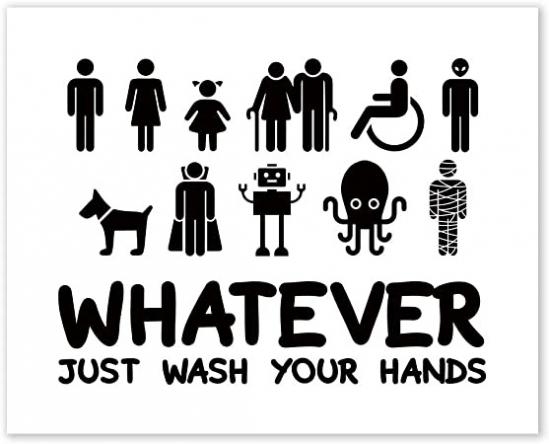 Good. Transgender people should be able to use the bathroom and locker rooms under their gender identity. This bill, like “Don’t Say Gay” in Florida, is the gay panic repackaged and is disgraceful.

Sorry, but the whose “separate but equal ” bullshit you’re espousing was proven to be garbage over 6 decades ago. Please keep your transphobia to yourself.

This what happens when the governor and a majority of the state legislators are Evangelicals – they always go after minority groups of all types for disfavored treatment.

In the end, they’re really claiming that men can’t be trusted..

That All men are rapists and perverts who will upend their whole life to get close to a possible naked woman. Huckabee said he would dress up just to get into the shower with school aged girls. People who pass these bills shouldn’t be allowed near women at all, without supervision. Not even their wives.

All I care about is whether or not the toilet is flushed and there’s pee on the seat.

I think the purpose of these stupid laws is a shortsighted attempt to get transfolk to leave the state, but some are kids who don’t have that option until they are emancipated from their families. The vast majority of the others are people who are gainfully employed and not causing trouble, but only need to use the restroom because they are at work or out going about their business and patronizing local stores and contributing to the economy,so they can’t use the washroom at home. Their only alternative will be to use the bushes, which is creating a needless and avoidable sanitation issue.

The purpose of these stupid laws is cruelty.

One thought on “Lawsuit filed against Tennessee ‘bathroom bill’”