Notice that all of these have some LGBTQ+ content or characters.    It doesn’t even have to be explicit as the rhyming book of babies shows.   The goal is to remove representation of LGBTQ+ from society.   As if you don’t see it then it won’t exist.   Got news for these people, it is straight people that create gay kids.    I never read a book with gay characters when I was growing up, but I was gay from birth.    This is what was done in Russia and other authoritarian countries, and the maga parents want to have that kind of authoritarian government here.    The thing is these vocal groups are the minority.   They are a small group of religiously motivated people.   Yet they scream that any mention of LGBTQ+ offends them.  OK well any mention of religion or the bible offends me.   So can we get a don’t say Jesus law for schools, and a warning sticker for the bible that it is not suitable for students.    Hugs

A southwest Florida school district added warning labels to more than 100 books, many of which touch on issues related to race or the LGBTQ community.

Collier County Public Schools, a district that includes part of Naples, added the labels both on physical copies of the books and in Destiny, the district’s online catalog, according to the nonprofit Florida Freedom to Read Project. The top of the label, according to a photo shared with NBC News by Florida Freedom to Read Project, says “Advisory notice to parents” in capital letters.

“This Advisory Notice shall serve to inform you that this book has been identified by some community members as unsuitable for students,” the label states. “This book will also be identified in the Destiny system with the same notation. The decision as to whether this book is suitable or unsuitable shall be the decision of the parent(s) who has the right to oversee his/her child’s education consistent with state law.”  A sticker of the notice is on the front inside cover of the books, according to Stephana Ferrell, co-founder of the Florida Freedom to Read Project, which advocates against censorship in Florida schools. Ferrell said a media specialist in the school district shared photos of the labels with her in June.

After a series of public records requests about the labels, challenged books and the district’s creation of a committee that reviews school materials, Ferrell said she received a phone call from Elizabeth Alves, associate superintendent of teaching and learning for Collier County Public Schools.

Alves defended the decision as “a compromise,” Ferrell said.

“I said, ‘It’s unfortunate, because this is a literary work. The sticker that they chose to put on there, the language that they chose, would make any reader who would otherwise pick up the book based on the cover and the description, it would make them think twice about reading the book,’” Ferrell said of her response to Alves.

Chad Oliver, a spokesman for Collier County Public Schools, confirmed that Alves spoke to Ferrell but denied that the warning labels were added in response to a conversation with the Florida Citizens Alliance.

“Based upon advice from the General Counsel, we placed advisory notices on books about which parents and community members had expressed concern and in accordance with the recently passed Parents’ Bill of Rights Law (HB 241),” Oliver said in an email, referring to a state law that allows parents to object to instructional materials.

A total of 110 books feature the advisory labels, according to PEN America, a nonprofit group that promotes free speech. This list, which PEN America shared with NBC News, has significant overlap with a list of at least 112 books that the Florida Citizens Alliance inquired about in a Dec. 11 email sent to Collier County Public Schools. Ferrell, who obtained the email through a public records request, shared a copy with NBC News.

Keith Flaugh, CEO and co-founder of the Florida Citizens Alliance, confirmed his group submitted a public records request about 112 novels in the district.

“Many of these contain sexually explicit and age inappropriate content,” which he said in an email is in direct violation of Florida laws on obscenity and the sale of harmful materials to minors. He also citeda 2017 law that the group helped draft that allows parents and any residents of the state to object to instructional materials and provide evidence for why they believe the material is inappropriate.

Some of the titles that appear on both lists — and now have an “advisory notice to parents” warning label in Collier County Public Schools — include LGBTQ- and race-related books that have landed on banned-book lists across the country. These titles include “Gender Queer: A Memoir” by Maia Kobabe, “All Boys Aren’t Blue” by George M. Johnson, and “Stamped: Racism, Antiracism, and You” by Jason Reynolds and Ibram X. Kendi. The list also includes literary classics like “Beloved” by Toni Morrison and “I Know Why the Caged Bird Sings” by Maya Angelou.

The labels appear digitally in the library records & physically on the books. They warn: “this book has been identified by some community members as unsuitable for students.” Apparently, a lot is ‘unsuitable’. Even Everywhere Babies by Susan Meyers & illustrated by @MarlaFrazee. pic.twitter.com/wA5fT5fjLr

“The labeling of these books risks attaching a stigma to the topics they cover & the books themselves….Every child deserves the right to learn from a diverse set of voices & perspectives & to freely access the books they wish to read.” – @jzfriedman. https://t.co/DSrLhTQf5x

The “Babies, Babies Everywhere” book has a single illustration where there are two dudes sitting on a bench while two babies play nearby. The pairs don’t even look like they’re the same race or ethnicity.

The virulent homobigots decided the only explanation is they must be two gay dads in a blended family, when really there’s no context whatsoever. Could just be a couple of dads who were friends, letting their kids play together.

But somehow this book deserves a warning label stating the book is dangerous.

In truth, these are dangerous times for the entire LGBTQ community. I haven’t seen this kind of non-stop bigoted, slanderous shit since the early 1980s. And in truth, it feels vastly more overtly threatening now.

And because they now control SCOTUS.

DeSantis is gathering steam for his nationwide POTUS campaign. He knows his demographic and he’s making sure they know him, too.

Great points. The overt threats and vitriol against trans people appears to be growing. If politicians continue to draft and pass laws that target trans people, the physical violence and murder statistics will rise.

I’ve got some of these, which I put on Bibles I find in hotel rooms: 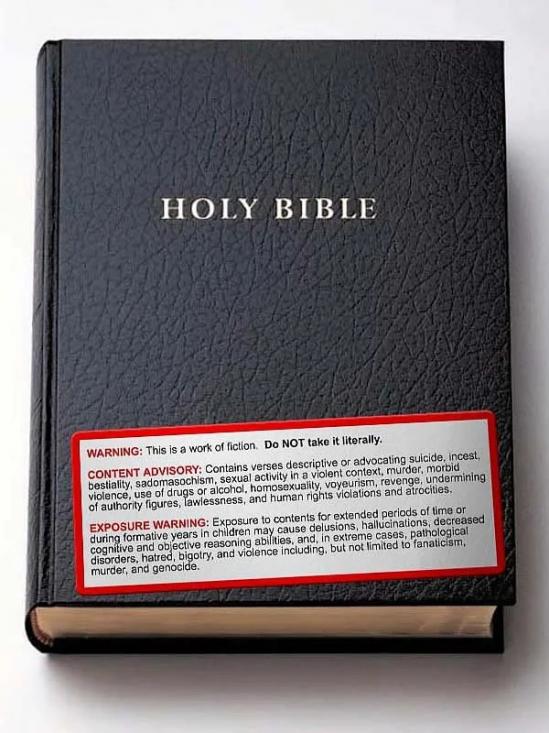 Why aren’t the religious texts in the libraries getting those warning labels too?

That’s funny. I thought Rick Scott said that the lefties were the big bad book burners. I wonder what gives?

Every Republican accusation is a confession.

I’m so sick of their extremist virtue signaling. They don’t care how much damage they do to children as long as they feel like they triumphed over someone weaker. They are coward bullies.

Warning labels on queer books, but none for assault weapons. Check.

“Warning: Reading this book may lead to understanding and empathy.”

The fall backwards has been difficult and disturbing. I graduated HS in 92. Without the library, because I grew up pentecostal, I would have had nothing. Putting that label on a book seems like putting a target on those that have checked it out, look at it or maybe put on a list.
You can’t put anything past these people
I am sad that the freedoms we fought so hard for the ones coming up seems to be disappearing and our compromised Supreme Court along with the radical religious right is ushering us back to the darkness.

Be ready for anything. They are going all out.

I didn’t dare look for anything gay-themed in the school library. This was pre-internet of course. Thank FSM for the college library in town that had a pretty good collection for the time.

Shouldn’t the labels read: “Religious zealots identified this book as a threat to narrow mindedness.”

Where are Joe Orton and Kenneth Halliwell when you need them?

Stoned and loving it • 11 hours ago

attention parents. some busybody has decided they know better than everybody else. beware the cloak of piety hiding the hate of bigotry.

Just sent all of the Collier school board members the following email:

Do you support the homophonic and racist labeling of books in the Collier school libraries?

You know, Hitler would have approved of this. Of course the next step will be to start burning books, isn’t it?