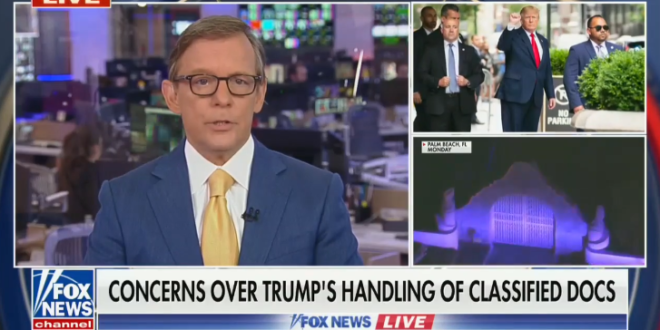 “More questions are being raised this morning. Did former President Trump try to sell or share the highly classified material to the Russians or to the Saudis or others?

“Or were the documents innocently mishandled and stored because he thought he had a legal right to have them?

“And Russia’s state media already is claiming that Russian officials have seen the material. Empty boasts or has there been a leak that officials fear could pose a grave danger to the United States security?

“How would they get this if it’s under lock and key or was it? Because the Feds apparently told them back in June that you got to put all padlock on that on the storage room.

“We don’t know where this stuff was floating around.” – Fox News host Eric Shawn.

Excuse the source below, but watch the clip.

This morning he asked Rebekah Koffler about the idea of Trump selling nuke secrets to Russia and suggested that Putin has seen the documents. pic.twitter.com/LiqG4oSUw4

Ask yourself the question: “Can he get any money for the
documents ? Then think about what the Orange twat would do — would he care that by selling them he’d be a traitor or would he rather be that much richer ? Evil traitor or Cash in the pocket ???

Fox is cutting TFG loose, they’re going to throw their adulation towards DeathSantis, you watch he’ll start appearing on all their ‘shows’ soon and they’ll start pushing his agendas.

DeathSantis’ agenda is the same as Trumps. That’s why they like him, he’s more predictable than Trump and knows how to keep the quiet parts quiet.