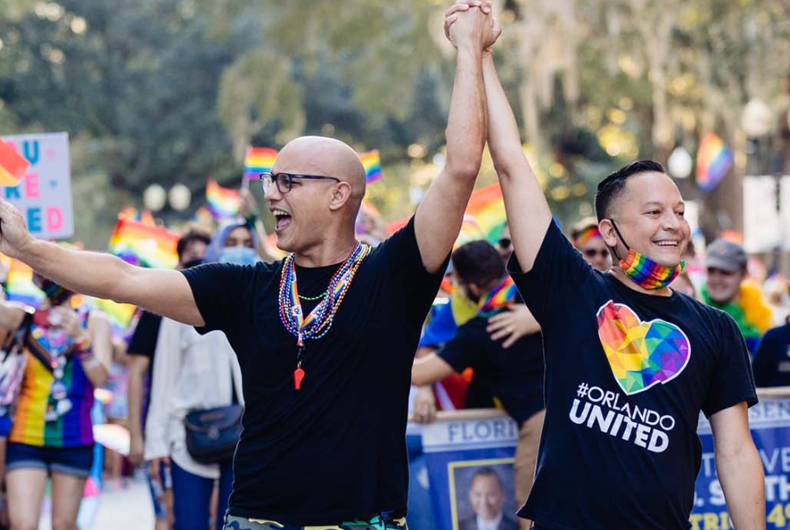 Six out, Democratic LGBTQ candidates running for the Florida state legislature all won their primaries this Tuesday. All of them oppose the state’s “Don’t Say Gay” law.

At least 20 states have introduced “Don’t Say Gay” laws this year. The candidates worry that, if left unopposed, Republicans will spread harm queer youth and families nationwide with their newfound brand of queerphobia.

Jones became the first openly LGBTQ Black person elected to the Florida legislature when he was elected in 2020.

On the campaign trail, he shared how publicly coming out as gay at age 30 caused members to leave the south Florida church where his father preaches. Friends stopped talking to Jones, families began making jokes about him behind his back, and even his own father expressed disappointment in his sexuality, he said.

So when he spoke out against the state’s “Don’t Say Gay” law — which forbids discussing LGBTQ issues in kindergarten through third-grade classes — Jones noted that it takes courage for young people to be themselves. He also said that LGBTQ issues aren’t being taught in the aforementioned grades, and that state Republicans only passed the law to rally their voting base.

“It’s discriminatory on the surface,” Jones said in an interview. “The problem is coming when young people are being treated in a manner that they now have to question who they are, knowing that they already come from households who do not support them… I think that’s the dangerous part, because LGBTQ+ youth are four times more likely to commit suicide.”

When Michele Rayner first won her election to the state House in 2020, she became the first openly Black queer woman ever elected in Florida at any level.

“I didn’t run for office just to make history,” she said in a video. “I ran because I wanted to make a difference for people.”

Meanwhile, Eunic Ortiz, who is running for a state Senate seat, said the ramifications of “Don’t Say Gay” are detrimental to LGBTQ youth.

“We need to be creating solutions for the issues that everyday folks are actually facing,” she said. “Not playing political theater to try to appease a few wealthy donors in the Republican movement that, frankly, are homophobic and hate the LGBTQ community.”

“We have people in the LGBTQ community living in every single county in the state. They are our neighbors and they are our community leaders…. LGBTQ people are the workers that are making our counties and communities run,” she said. “[Floridians] are tired of seeing them take on this cultural war, instead of addressing real issues,” like the environment or rising rents.

Adam Gentle spoke against the law at a political event in early March. At the event, he began his two-minute speech by announcing, “I’m gay.” He then said that schools are often the only safe spaces where LGBTQ youths feel they can safely discuss their queer identities with others.

“Their ability to talk with trusted teachers and administrators is being ripped away from them,” he said.

Rep. Carlos Smith has used his political office to oppose the law. When he debated against the bill in February, he wore a face mask with the word “gay” printed on it in large letters.

In his remarks, he said the bill was “deeply personal” to him as a queer Latino, especially since the law would prevent teachers from discussing important events, like the 2016 Pulse nightclub shooting which mostly harmed other queer Latinos.

“A majority of Floridians oppose this proposal that seeks to censor conversations about LGBTQ people in our schools,” he said.

“This bill goes way beyond the text on the page,” he noted. “It sends a terrible message to our youth, that there is something so wrong, so inappropriate, so dangerous about this topic that we have to censor it from classroom discussion…. To all LGBTQ youth — we see you, you’re loved and your lives are worth fighting for!”

When Florida Gov. Ron DeSantis’ (R) press secretary Christina Pushaw defended the law by calling its opponents pedophilic “groomers,” Smith responded, “Bigoted attacks like this against LGBTQ people are the worst of the worst…. Literally, it’s the oldest trick in the book against LGBTQ people.”

Smith said that DeSantis only signed the law to advance his political ambitions. He worries about DeSantis’ likelihood of running for president in 2024. “My concern is that he is much smarter and much more calculating than Donald Trump ever was,” he said.

Janelle Perez agrees with Smith. She’s a mother of two, married to a woman, and, if elected, she would be the first LGBTQ parent and the first queer Latina or queer woman ever elected to the Senate.

She worries that the law will subject her own daughter to bullying and prevent her from discussing her own family in school. But even worse, she worries what will happen to when DeSantis runs for president.

“When people in Hollywood, and New York, and in California are looking at the things that Ron DeSantis is doing in Florida, what they need to understand is that Florida is Ron DeSantis’s guinea pig,” she said.

“He is going to run for president in 2024,” she continued. “So if you don’t like what’s happening in Florida, and you don’t want this rhetoric to become the national conversation in 2024, then you need to help us stop it, now. Because it’s going to come after you, and the rest of the country.”

Although DeSantis and other supporters of the law say that it protects parents’ rights to control what their kids are exposed to in schools, Perez said it basically erases queer parents from schools and tells their children to feel ashamed of their families.

“LGBTQ families aren’t going anywhere,” Perez told The Washington Post. “We want to just receive the same rights as every other parent.”

“Republicans in Tallahassee have failed our state and I cannot sit idly by as they make us less safe, restrict our rights and hurt our children,” she added.