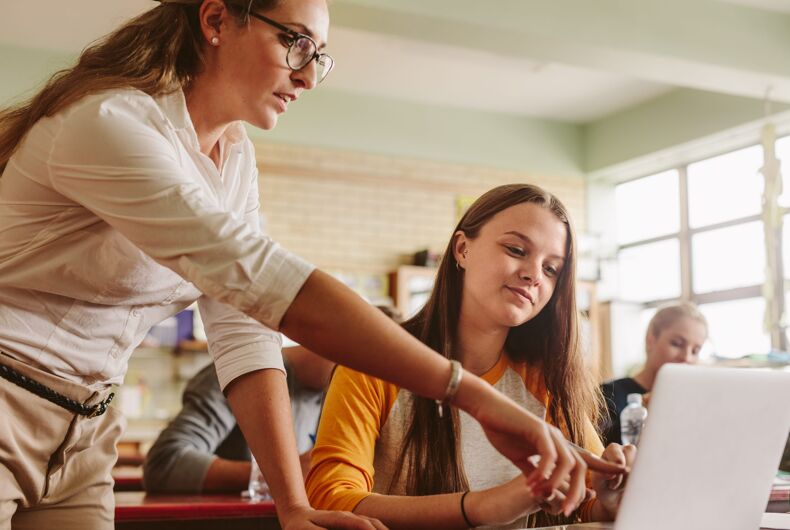 Educators in our schools are among the most committed and passionate members of any profession in the United States. Nonetheless, they rank among the most underpaid and underappreciated members of any profession even though they must undergo extensive training, manage the ever-increasing bureaucratic procedures, and deal somehow with the increasing violence in schools and society.

Any good teacher knows that assigning and grading papers is far from the full measure of their actual responsibilities. Most educators serve as parents for students away from home, as counselors, and as conflict mediators, while they offer a kind shoulder on which to cry.

The day of the educator begins far before they arrive at school and extends long after the final bell. They prepare for classes, grade assignments, attend seemingly endless meetings and in-service trainings, read and memorize the newest state standards and updated curricular mandates, attend professional conferences, meet with parents and guardians, confer with administrators and colleagues, mentor student teachers and school volunteer aids, arrange for child care, put off purchasing items for themselves in order to buy essential resources for their classrooms, which fall outside the school budget.

And now, the National Rifle Association and some conservative members of Congress are asking them to consider taking up arms to protect their students if school shooters enter their buildings.

Quite frankly, our nation requires the impossible from our dedicated educators. We ask them to fill in all the gaps, fix the problems in students’ homes and communities, to function at the highest level within our increasingly dysfunctional society. And they are stretched to the point of breaking. Love and commitment to a profession can take an individual only so far.

The U.S. Bureau of Labor Statistics found that approximately 10 million educators work in public education today, which is down by 600,000 from 10.6 million in January 2020.

Though the overwhelmingly stressful conditions brought on by the Corona pandemic account for several of the reasons teachers cite for leaving the profession, other factors have also eroded their once enthusiastic commitment to entering the classroom. These factors include the shocking budget cuts brought about by the 2009-2010 recession, some of which have not yet been restored.

Since January 2021, Education Week has found that 42 states have either introduced bills in their legislatures or have taken other actions that would restrict how educators discuss racism, sexism, and LGBTQ issues in the classroom. Sixteen states have already imposed these restrictions.

For example, the Florida House has imposed new restrictions on how race is discussed in schools, colleges, and workplaces. The bill went to Governor Ron DeSantis’ desk for approval. The state has positioned itself at the tip of the spear to cut and bleed to death school curricular materials on topics of race, gender, and sexual identity with its so-called “Parental Rights in Education” law, better known as the “Don’t Say Gay” law.

Currently, several states are proposing legislation to restrict transgender rights in athletics or in accessing some health services, and others limit overall LGBTQ protections, especially in schools. At least 12 other state legislatures are now appropriating the Florida model in considering similar “Don’t Say Gay” laws.

Before signing the bill, DeSantis stated at a press conference that teaching kindergarten-aged kids that “they can be whatever they want to be” was “inappropriate” for children. “It’s not something that’s appropriate for any place,” he said, “but especially not in Florida.”

He continued: “We will make sure that parents can send their kids to school to get an education, not an indoctrination.”

Books refresh our minds to a world of learning we could never imagine. They expose us to knowledge to develop understanding and empathy for people, communities, and concepts outside our lives.

Books challenge us to think outside the box. They continually expand our critical thinking skills, especially when combined in dialogue with others, to analyze our small piece of the world and envision how we can improve it.

Reading books and studying real history age-appropriately challenges the sterile whitewashed curriculum on which many students have been weaned. The curricular pablum many are fed is composed of non-nutritive hollow calories deadening creativity and critical thought, and potentially worst of all, a love of learning.

This, in turn, reduces students’ chances of bringing about systemic progressive change in themselves and in their social environments. Enhancing and expanding critical thinking generally stands as a chief reason why those in positions of power have a vested interest in keeping things the way they are.

Texas state Rep. Matt Krause (R) has issued a statement asking schools throughout the state to report to him whether they currently hold approximately 850 books on a list he has compiled. Krause explained that he is directing his aim at curricular materials and school library collections that “might make students feel discomfort, guilt, anguish, or any other form of psychological distress because of their race or sex.”

Some of the books on his list include written and graphic novels, while the majority represent non-fiction historical materials in the categories of race, nationality, sexuality, and gender identity.

A brief sampling include: 2020 Black Lives Marches by Joyce Markovics; Life, Death, and Silence: Women and Family in the Holocaust, by Esther Hartzog; The Indian Removal Act and The Trail of Tears, by Susan Hamen; What Is White Privilege, by Leigh Ann Erickson.

Also included are: Beyond the Gender Binary, by Alok Vaid-Menon; Rainbow Revolutionaries: 50 LGBTQ+ People Who Made History, by Sarah Prager; and The Abortion Rights Movement, by Meghan Powers.

Some districts are attempting to ban materials from the 1619 Project (named after the year enslaved Africans were first ruthlessly brought and dumped onto what would be called the United States against their will).

By comparison, is this different from the draconian practices enacted by Arizona state officials in 2010 to strip away the Mexican-American Studies programs from Tucson public schools? Arizona Superintendent of Public Instruction, John Huppenthal, suspended the highly successful and student-empowering program.

In 2010 when the state legislature passed the measure, then-Arizona School Superintendent Tom Horn asserted that the law is necessary because Tucson’s Mexican-American, African-American, and Native American studies courses teach students that they are oppressed, encourage resentment toward white people, and promote “ethnic chauvinism” and “ethnic solidarity” instead of treating people as individuals.

Huppenthal released a list of books he had banned from classrooms throughout the state, including The Tempest by Shakespeare, Rethinking Columbus: The Next 500 Years (1998) by Bigelow and Peterson, The Latino Condition: A Critical Reader (1998) by Delgado and Stefancic, Critical Race Theory: An Introduction (2001) by Delgado and Stefancic, Pedagogy of the Oppressed (2000) by Freire, United States Government: Democracy in Action (2007) by Remy, Dictionary of Latino Civil Rights History (2006) by Rosales, and Declarations of Independence: Cross-Examining American Ideology (1990) by Zinn.

Anyone who believes in academic freedom and cultural liberty must find practices of censorship offensive. Students previously enrolled in the Mexican-American Studies program achieved a 94% high school graduation rate, up significantly from around 50% of Latino/a students not enrolled. The program had given students a sense of cultural pride, a passion and joy in the learning process, and a feeling of hope for their futures.

We as a nation have a responsibility to our youth and to the amazingly talented and vital heroes committed to their education. The time has long since passed when we must arm educators with higher sustainable salaries and benefits packages, in addition to fully resourced schools, and curricular options, rather than with firearms.