As some of the police are white supremacist thugs belong to or agreeing with the groups like the Proud Boys it is not surprising the police joined with the haters and attacked the LGBTQ+ group.   The reason for pride is the discrimination and hate the LGBTQ+ are subjected to.   When white people face that same level of discrimination, abuse, attacks , and have states pass don’t say white bills against mentioning white people exist in schools then I will support white pride.   Note that the Proud Boys, the favorite of tRump, has become the brownshirts of the maga crowd.  The enforcers tasked with assaulting people at LGBTQ+ events and and making people too scared to attend them.     Hugs 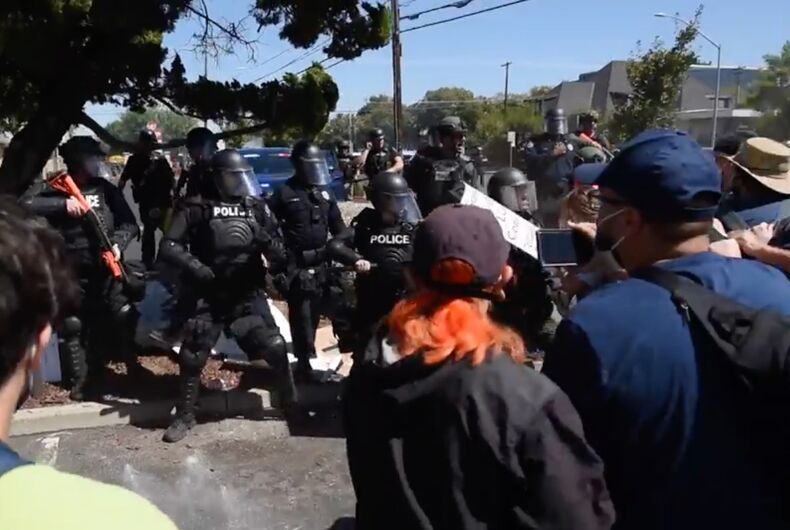 Officers move in on LGBTQ protesters in Modesto, CaliforniaPhoto: Screenshot

The annual “straight pride” gathering in Modesto, California turned violent for the second year in a row, and instead of arresting the Proud Boys who started the fray, police shot into the crowd of protestors with pepper balls and beanbags.

The event was held outside of a Planned Parenthood clinic and the group of far-right militia members and hate preachers was vastly outnumbered by counter protestors. This is the fourth time the group has held the event; the group uses the opportunity to hurl racist and anti-LGBTQ slurs at passersby and protestors while soaking up the local media and police attention.

Two counter protestors were arrested by the end of the scuffle. One Proud Boy was arrested. All three were charged with “failure to disperse.”

After one of the militia members tried to push through the police line, a tussle ensued and LGBTQ defenders started throwing water bottles. Someone tossed a firework into the fray; it was unclear what group the culprit was associated with.

Two LGBTQ protesters were injured in the assault. As the police moved on the crowd with support from SWAT tactical units, the straight pride supporters hid behind the police line.

“They came at us with batons, they jabbed us, they hit the crap out of out us,” one of the injured told a reporter. He was hit with a pepper spray bullet.

“We have two armies to go up against when we stand for our rights,” Odette Zapata, who wore a bulletproof vest to the protest, told the Modesto Bee. “We have to deal with the cops attacking us and we’re about to get a second wave of right-wing extremists. We’re fearful of them attacking us as well.”

Last year’s “straight pride” provocation ended in fistfights and bear spray. Reports say the militia group provoked the protestors, kicking off the brawl that closed down the street and ended in two arrests.

The group has become the far-right’s “enforcers,” starting fights and attacking progressive activists across the nation. They stage fake Pride events across the country.

Boston organizers Mark Sahady and Suzanne Ianni were arrested by the FBI earlier this year in connection to the January 6, 2021 riot at the Capitol after they were outed by the group behind Straight Pride.

The FBI found out about the pair through social media posts from the organization “Super Happy Fun America,” which organized Straight Pride in Boston in 2019 and whose motto is “It’s Great to be Straight.” Sahady is the group’s vice president.