The Christian Taliban moves forward with their effort to control women.   The republican warn on abortion was about control of women’s bodies and their reproductive systems.    Think about it, women are the only people required by law to let another to organism use the resources of their body to keep alive.   Even babies that are fully delivered and breathing on their own don’t have that right.   No man can even be forced to give blood for their own child, nor any other part of their body.  Not even a sample of their bone marrow, nothing.  Yet woman must provide a zygote full use and priority of her body, at least until it is born, possibly causing her lifelong injury or even death.  It is about control, or the anti-abortion laws would have these provisions for every child applying to both sexes involved with creating it.    So what was the issue with trans women?  Control over the trans woman and their body?   Well let’s take it one step further and ask what girls really should be doing to get ready to be incubators of a man’s offspring?  Hugs 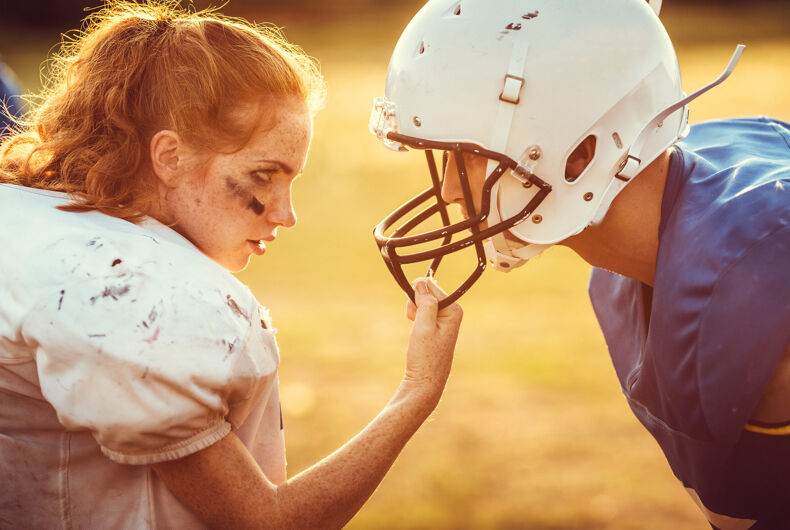 It turns out that some far-right Christians aren’t just opposed to transgender girls playing on sports teams, they’re opposed to any girls playing sports at all… and that opposition may have landed one Christian school in legal trouble.

While it might seem strange that females should be allowed to play on sports teams that are predominantly male, it’s actually required under Title IX, the 1972 federal law that prohibits sex discrimination in sports within any schools that receive federal government funding. Title IX states that, in sports where a girls’ team is not available, girls must be allowed to try out for the boys’ team and participate on the same basis as boys.

VCA hasn’t issued a public comment about its forfeit against CUHS. However, the school explained its similar decision to forfeit a football game last year against Cuyama Valley High School (CVHS) because it had a girl on its team.

At the time, VCA lead pastor and school superintendent Joel Mikkelson told The Santa Maria Times, “Football is a violent game and we understand the value of such in training our young men within the boundaries of an organized sport.”

CUHS’ Head Coach Andrew Crosby told The Tribune that he’s upset that VCA singled out the two girls on his team just because of their gender. The girls’ names are Emily Reed and Andrea Aguilar.

Crosby said that he would never force Reed or Aguilar to stay off the field to accommodate VCA, nor does he want the girls to feel like the cancellation of the game is their fault.

“It’s not fair,” he said, “and I hope that because of the support of their families, the team, and community, that they can have confidence that we support them…. They are part of our team and will suit up for every game.”

The forfeited game will count as a victory for CUHS. However, VCA’s decision to forfeit its games could’ve violated federal law and state rules for student-athletes.

When VCA canceled its game against CVHS last year, it sent a letter to the school stating that its female athlete wouldn’t be allowed to compete on the VCA campus. That letter may have violated Title IX. The letter may have also violated the California Interscholastic Federation’s (CIF) rules requiring schools to comply with Title IX.

The parent of the female CVHS player has since filed a lawsuit against VCA seeking a jury trial and “unspecified damages over loss of education and career opportunities, reputation, well-being, and attorney’s fees.” The suit seeks to stop VCA from committing such sex-based discrimination in the future.

Unsurprisingly, VCA isn’t the only group of Christians who are against girls playing sports, whether or not it’s with other boys.

Tanner Furrh of the Stedfast Baptist Church in Watauga, Texas — a man who has said that lesbians deserve violent deaths — recently said that he is against girls playing any organized sports because sports cause girls to be “more masculine.”

“Are they out there wearing dresses and skirts while they’re playing sports? Are they learning to be a feminine woman?” Furrh asked in a recent sermon. “No, that’s not what sports do for women…. . My daughters are not going to be in any organized sports team.”

For the record, female field hockey players do actually wear skirts, but that doesn’t matter because — as with Christian misogyny in general — fundamentalist opposition to female athletes isn’t really about preserving “femininity.” It’s about controlling girls’ bodies, freedoms, and life choices.

"Are they out there wearing dresses and skirts while they're playing sports? Are they learning to be a feminine woman? No." pic.twitter.com/9cMtK4jpI8