This post shows some of the right wing talking points and then refutes them with the facts.   It shows how one anti-trans activest makes stuff up that when they are checked out it shows he totally lied.   But his lies are used by the right whing hate media to further the misinformation and rile up anger at the LGBTQ+.   These people don’t care what they are spewing is lies and misinformation, they hate / don’t under the trans people and think anything done to stop people from transitioning is a good thing.   Hugs 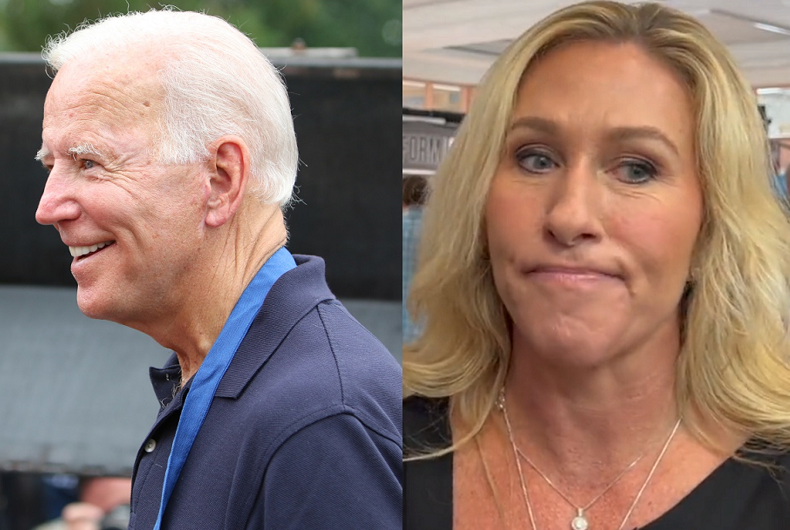 Rep. Marjorie Taylor Greene (R-GA) is continuing to use extreme transphobia to attack President Joe Biden, this time sharing misinformation claiming that “children’s hospitals across the country” are performing gender affirming genital surgeries on minors as well as an image of what appears to be a severed hand.

Biden tweeted over the weekend about what Democrats are going to do if they win in the midterm elections.

“Joe says get an abortion instead of be a mother,” she responded. “Joe wants to take away guns so women can’t protect themselves.”

She included a tweet from unhinged Canadian anti-trans activist Chris Elston. Elston spent part of 2020 and 2021 putting up a billboard and wearing a sandwich sign that said “I (heart) J.K. Rowling” and harassing women who he perceived as too supportive of trans rights.

Elston’s message claimed that “children’s hospitals across the country” are performing genital surgeries on trans minors, which is not true. Gender affirming surgery is not performed on minors.

He also wrote that the World Professional Association for Transgender Health (WPATH) “now recommends” genital surgeries “for 17-year-old girls.” The WPATH standards of care actually say, “Genital surgery should not be carried out until patients reach the legal age of majority to give consent for medical procedures in a given country” and suggests a 12-month waiting period.

Elston shared images of what appears to be a cadaver’s arm and claimed that they showed “tissue harvesting for construction of a phallus.” Tissue used in phalloplasty comes from the living tissue of the person who the procedure is performed on, not corpses.

“And Mr. 81M votes lies about voting rights & wants girls under 18 to be able to do this with your tax dollars,” Greene wrote, even though that is not Biden’s position on the issue. Biden has never called for the standards of care for gender affirming care to be changed and has defended gender affirming care as a decision to be made by patients, their families, and their doctors.

The claim was rated “false” by Politifact.

But Greene apparently believes that this is happening so she introduced a bill that would ban gender affirming care for minors that included a long list of surgeries, even though they are not performed on minors. Her bill would go far beyond banning surgery and would ban puberty blockers, reversible medications that give trans youth more time to figure out their identities before the permanent effects of puberty appear. Puberty blockers have been shown to significantly reduce lifelong suicide risk.

Right before she introduced her bill, Greene was on Tucker Carlson’s Fox News show claiming that her bill would stop “horrific ‘sex change’ genital surgeries” on minors.

This is the second time this week that Greene has attacked Biden over his supposed support for gender affirming genital surgeries for minors. Yesterday, Greene claimed that Biden “supports castrating boys with so called ‘gender affirming care’ before they are even old enough to vote,” which is not true.

“Yes there is an awakening coming,” she wrote. “We will STOP your sick & perverse child abuse.”

Joe says get an abortion instead of be a mother.

Joe wants to take away guns so women can’t protect themselves.

And Mr. 81M votes lies about voting rights & wants girls under 18 to be able to do this with your tax dollars.