The arbitrator said the man shouldn’t be disciplined for protecting his wife.   But that is not what he was doing.   They were in a public place and his wife was loudly causing a scene about a transwoman.   A fellow patron started recording the wife, the man got up to confront the woman recording them.    Now that woman was with in her rights, he is going to her to confront her.   The woman says “Please take your hate elsewhere,” the patron who is recording them said. Michael Smurro then threw his beer at the woman.  He threw his beer on a woman because he was angry she asked him to take his bigotry elsewhere, he was angry she dared tell him what to do.  So he threw his beer on her.  Is that the way we want someone who is in the job of “Vice Principal of Safety”  to act?    Really this is what we should teach kids, that when you are angry it is OK to pour your drink on someone?   But I am glad the school district is standing up for the LGBTQ+ and want him to resign.   Hugs 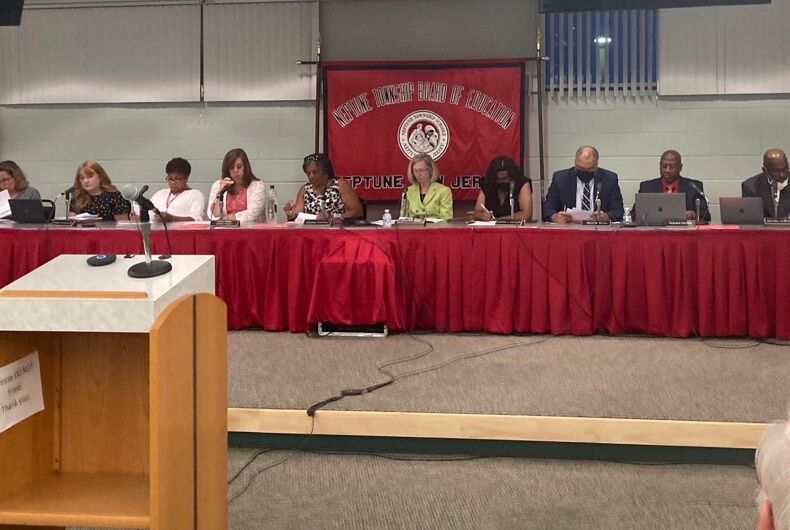 A viral video recorded by patrons shows Michael Smurro and his wife, Lisa, at the outside seating area of a local restaurant as Lisa Smurro ranted loudly about a transgender woman who used the bathroom. When the Smurros realize that someone at a different table was recording them, they get up to confront that person, while Lisa Smurro continued to rant about the trans woman.

“Please take your hate elsewhere,” the patron who is recording them said. Michael Smurro then threw his beer at the woman.

The video of the confrontation quickly garnered national media attention.

The recording raised questions about what happened that day, particularly, whether or not Mr. Smurro engaged in transphobic behavior himself. Smurro quoted the transphobic slur of the unidentified woman his wife used when explaining the incident to District Superintendent Dr. Tami Crader, according to the investigation.

The Neptune Township Board of Education requested his termination and the commissioner’s office agreed. However, Barbara C. Deinhardt, the arbitrator, disagreed with the school board and approved his return to work starting on August 18.

“The district took legal action to terminate [Smurro] through tenure charges, but the arbitrator assigned to the case instead ruled in favor of the penalty of six months unpaid suspension. Mr. Smurro’s tenure remains in place and he has been reinstated as a vice principal of safety located in the central office,” said President Chanta L. Jackson to the audience.

Lisa Smurro was the only individual using transphobic language, therefore, he can’t be guilty by association, according to the investigation’s 35-page decision.

“The theory that because he defended his wife who arguably expressed intolerance for transgender persons, he thereby discriminated in the provision of benefits or services to students is far-fetched,” reads Deinhardt’s conclusion.

Superintendent Crader agreed with the public consensus in the investigation. However, Jackson warned the board couldn’t respond to public questions involving the employment or discipline of employees before public comment.

Michael Hoffman, the father of children in the school district, believes in forgiveness. He believes in second chances, yet, he believes as a public official the vice principal should resign regardless of the arbitrator’s award.

“A person in this light should not work around children. By bringing this person back we are showing children it’s okay to lead with anger and violence,” said Hoffman. “Neptune, I’m asking you to stand up and be a school where trans kids and all kids can grow up and feel safe.”

Hoffman’s words echoed others who spoke in the public portion of the meeting – including his wife Kym Hoffman.

Kym Hoffman is running for the Board of Education in the general election. The incident partially encouraged Hoffman’s run for public office. Her hope is to continue Neptune’s LGBTQ training, inclusivity and equity in the school, while making an effort to hold people in power accountable.

“There is nothing we can legally do now, but push for [Smurro’s] resignation,” Hoffman said.

The reinstatement comes at a vulnerable time for civil rights in classrooms as hundreds of anti-LGBTQ education bills trickle throughout the country.

“As of April 2022, there have been more than 300 anti-LGBTQ+ bills proposed in the U.S. Forty-two percent of LGBTQ+ youth seriously considered attempting suicide last year, and for transgender and nonbinary youth that number increases to 52%,” said Hoffman.

Ethan Dayback, a Neptune resident and transgender activist, reminded the district that he isn’t going anywhere and called for Smurro’s resignation.

Dayback went on to explain the harm LGBTQ children face throughout their lives, but that he is living proof that life goes on.

“I want the kids to see that I am here. I am a functioning adult. It wasn’t always easy, but I kept going. If you are a queer child and you are watching this, and you feel like all of these people aren’t protecting you… [it’s] because they’re not.”

A handful of students founded Neptune Township High School’s Gay Straight Alliance (GSA) while Bastian Poranski was a senior at the Jersey Shore high school in 2008. Poranski was elated to join. Only four people did. Fear of being retaliated against for being out, for being proud, kept people from joining. Still, Poranski found strength in four.

“So when I heard about other schools discriminating against LGBTQ+ youth, I was like: ‘Well, no. It’s not my school. I’m glad that’s not my school,” Poranski told the board at Monday night’s meeting. “But that’s not the case today.”

However, the school board president said she is doing her best.

Jackson said she appreciates the attendance of the concerned public in an email to LGBTQ Nation.

“Please know that this board amended our district’s slogan to reflect ‘A Community for ALL Learners’,” Jackson wrote. “We aim to embody this in all that we do.”

With the inclusion of ongoing training in concepts related to the LGBTQ community over the last two years, the school district is working in preparation for New Jersey’s Diversity and Inclusion Law to diversify hiring practices too.

“[We] have updated all school and classroom libraries to include offerings that portray political, economic, and social contributions of persons with disabilities as well as from lesbian, gay, bisexual, and transgender people,” Jackson said.