I posted a great video clip from TYT where Cenk and Ana talk about how Tucker Carlson talks that it has been proven that the hospitals all over the country … are chopping up kids into to body parts.  We know that for a fact he said.   Well it is like when Bill O’Rielly called the abortion doctor Tiller the baby killer night after night.    Someone killed him to stop the baby killing.   So now the rabid right wing maga are threatening to bomb hospitals to save the kids.   All because of lies.  If you are part of spreading those lies, you need to understand first your lying and second you are inciting violence against both the LGBTQ+ and those that help them with medical best practices.    Do you know there is genital mutilations done on babies that all these groups sanction including the government?   Yes the cutting off of part of the penis that makes the gland less sensitive and deadens pleasure.   It is called circumcision.    Routinely done on baby boys.   Go after that and leave the trans kids alone as they are not having surgery as kids.    Hugs 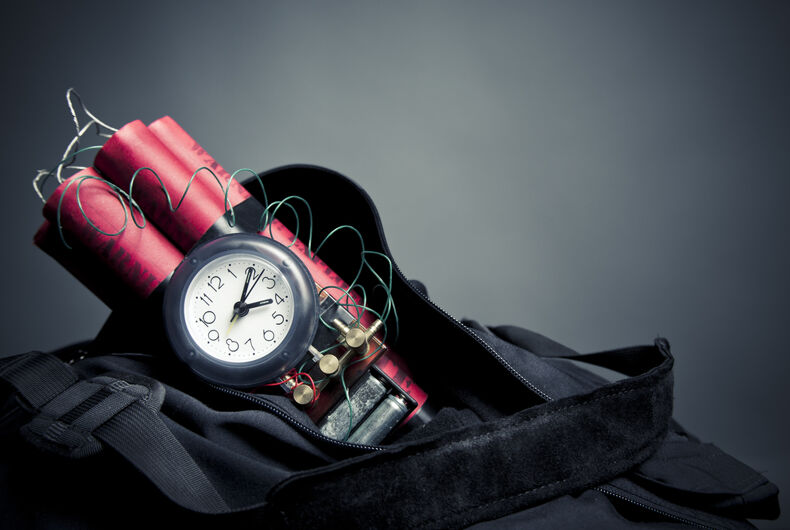 Following a weeks-long harassment campaign from anti-LGBTQ groups, police are investigating an anonymous bomb threat that was called in to Boston Children’s Hospital Tuesday night.

According to NBC News, the Boston Police Department sent its bomb squad to the hospital at around 8:14 p.m. on Tuesday, but found no explosive devices or suspicious items. On Wednesday morning, Detective John Boyle said that the investigation was still active.

“We are relieved no bomb was found and that employees and patients are safe,” the hospital said in a statement. “We remain vigilant in our efforts to battle the spread of false information about the hospital and our caregivers. We are committed to ensuring the hospital is a safe and secure place for all who work here and come here. We will provide additional information as we are able.”

In recent weeks, Boston Children’s Hospital, which ranks among the best pediatric medical facilities in the country, has been the target of what it has described as “hostile internet activity, phone calls, and harassing emails including threats of violence toward our clinicians and staff.” The harassment campaign is the result of misinformation that has proliferated on right-wing social media about the hospital’s Gender Multispecialty Service program, which treats children experiencing gender dysphoria.

On August 11, Chaya Raichik, who runs the anti-LGBTQ Twitter account “Libs of TikTok,” reposted an “expose” by Christina Buttons for the right-wing site Post Millennial, sponsored by conspiracy theorist Mike Lindell, the CEO of My Pillow. The “special report” consisted of videos publicly available on Boston Children’s website along with commentary insinuating that children as young as two or three were receiving gender-affirming surgery at the hospital.

Fact-checking site PolitiFact later debunked the claims. Patients qualifying for gender-reaffirming surgery must be at least 18-years-old and have a “persistent, well-documented, gender dysphoria,” according to the hospital’s website. “All genital surgeries are only performed on patients age 18 and older.”

In the weeks since Raichik’s tweets, Boston Children’s Hospital physicians have been inundated with death threats and harassing calls and emails. The hospital has also increased its security.