Can anyone show me where in the bible Jesus said don’t be respectful or don’t be kind to others and never use the name / pronouns they prefer.   Where in the bible did their god write only use male pronouns for beings with swing penises, something I highly doubt God the father he himself has?  Really the supreme being in your religion who is super magical, has a penis?   If not then you are using a preferred pronoun!   Did god ever write be an asshole over changing someone’s name, or did he himself command it several times?   This is just hate packaged as religion to get permission from the government to be an asshole and a jerk.   How much more superior that teacher must feel after treating a kid so crudely.    I hope everyone learns that they do not want to ever be like her.   Somehow for the good of the students we must get teachers like her out of teaching.   When did the rules of a job just not apply to those who claim religion?   Are we a theocracy or a democracy?   Again what is the big issue religiously with calling someone by a name they prefer, we use nick names for people all the time.   I think this is part of the stereotype gender role that must be enforced by the fanatically religious.    Woman’s clothes, men’s clothes, woman’s job, men’s job, woman’s names, men’s names, and so on.   I don’t think clothing, jobs, names and so on really need to have a gender assignment.   Is Kim a male or female name?  Depends where you are.  What about Sandy?    Hugs 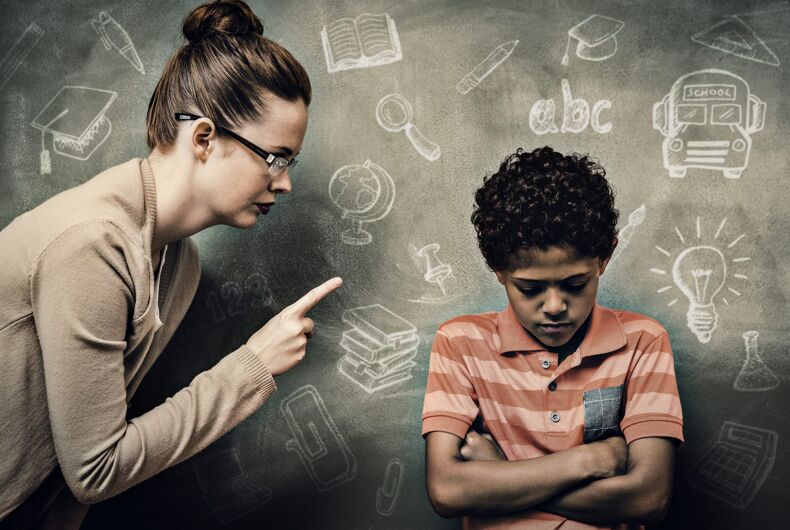 A teacher in Kansas was awarded $95,000 Wednesday to settle a lawsuit after she misgendered a student but claimed that she should be allowed to because of her religious beliefs.

The former math teacher at Fort Riley Middle School, Pamela Ricard, claimed it was a violation of her religious beliefs to use the preferred pronouns of a trans boy student and insisted on addressing him as “miss.”

She was reprimanded and suspended for three days for violating the bullying, diversity, and inclusion policies. She sued the school district.

The lawsuit alleged the Geary County School District denied Ricard’s request for a religious exemption to its policy that school staff use students’ preferred pronouns. The district also directed teachers to use a student’s legal name when communicating with parents, concealing the student’s pronoun preference, according to the suit.

“No school district should ever force teachers to willfully deceive parents or engage in any speech that violates their deeply held religious beliefs,” Tyson Langhofer, Ricard’s lawyer, told the AP.

Addressing the student as “miss” was Ricard’s attempted workaround to the school’s insistence she address him by his preferred name.

According to the lawsuit, Ricard believed using “Miss (legal/enrolled last name)” respected the student while also upholding Ricard’s religious convictions, despite the fact that that was deliberately misgendering the boy and also singling him out for differing treatment from his classmates.

Ricard said she believes God assigns gender at birth, according to the lawsuit. The school’s policy requiring her to use language that doesn’t conform to a student’s biological sex “actively violates Ms. Ricard’s religious beliefs.”

The settlement came about after a federal judge ruled the lawsuit could proceed, citing its likely success based on her free exercise of religion claim. The judge also granted Ricard’s motion to halt the district’s parental communication policy. Soon after, the district school board formally revoked the guidance.

The judge also ruled, incongruously, that Picard could avoid using students’ preferred pronouns but should address them by their preferred names.

Picard retired in May. Along with the $95,000 award, she won a statement from the school district that she was in good standing without any disciplinary actions against her.