For those that think it is a good thing to keep trans students from using the bathroom of their gender identity, please read how it makes these trans kids feel and how it singles them out for even more harassment.    As for the excuse used that this is about safety there has NEVER been a verified case of a trans person assaulting anyone in a bathroom, but there are cases where trans people have been violently attacked trying to use a bathroom.    Also cis women have been attacked and accused of being trans because they did not look womanishly enough for the haters.   For those that say they would feel funny knowing a trans person is in the same bathroom with them I would ask WTF?   Do you knock on stall doors to inquire if anyone inside them is trans?   Do you stare at people at the sinks washing their hands wondering what their genitalia is?  II have used bathrooms complete with individual shower stalls that were open to everyone no matter what sex, genitalia, or gender.  Their was no problems.   Anyway the SCOTUS has already found for one trans student on the bathroom issue, finding it was illegal to not let a trans person use the bathroom of the gender.    However there are now more religious fanatics on the court.   But these bathroom laws are solutions looking for a problem, they really are more political statements than needed laws.    Hugs 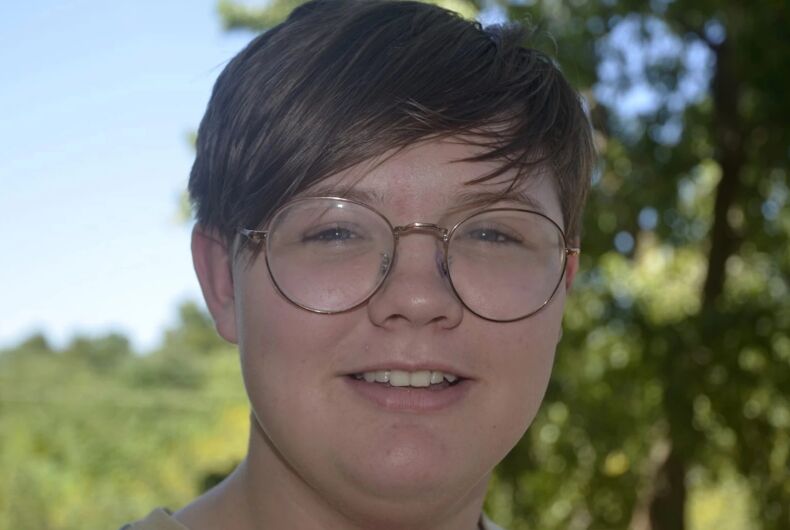 Three students in Oklahoma are suing state and school officials over the latest “bathroom bill” denying transgender kids the same rights as their fellow cisgender classmates.

Andy Bridge, a 16 year-old, and two other students (who filed the lawsuit anonymously) are being represented by Lambda Legal, the American Civil Liberties Union (ACLU), and the ACLU of Oklahoma.

In May, the Oklahoma state senate passed Senate Bill (SB) 615 in a 38 – 7 vote. The bill was quickly signed into law by Gov. Kevin Stitt (R). The law forces all pre-kindergarten through 12th-grade public schools and public charter schools in the state to restrict transgender students’ use of school restrooms and locker rooms to those consistent with the gender they were assigned at birth.

The law mandates a reduction in funding for school districts that don’t comply and allows parents to sue school districts if they believe their child is in danger of sharing a restroom with a transgender classmate.

Supporters of the new law say it promotes “safety.”

The lawsuit, filed Tuesday, says SB 615 violates the U.S. Constitution and Title IX by discriminating based on sex, gender identity, and transgender status. The complaint alleges the plaintiffs — including Bridge, another high school student, and a middle school student — will be “irreparably harmed” by the law. The suit calls on the U.S. District Court for the Western District of Oklahoma to issue a preliminary injunction to block its enforcement.

Bridge said in a statement, “I am a boy, and while living authentically hasn’t always been easy, it’s given me a sense of relief and happiness. Being able to use the boys’ restroom might seem like a small thing to others, but it is a vital step in my transition.”

According to the lawsuit, Bridge — a senior at Noble High School, just south of Oklahoma City — used the boys’ restrooms at his school last year without issue. With the new law on the books, he was told this fall by the school’s principal and vice-principal that he was now required to use a single-occupancy restroom instead.

Bridge was warned that if he violates the new policy, he’ll be subject to disciplinary action.

Of the boy’s restroom, Bridge said, “Being barred from using it leaves me singled out and excluded from the rest of my friends and classmates, but also feeling like I’m being told that I’m not worthy of the same respect and dignity as everyone else.”

“This is not the first such attack on transgender schoolchildren, and sadly it will likely not be the last,” said Bridge’s co-counsel Nicholas Guillory with Lambda Legal. “Anti-transgender state legislators nationwide keep singling out transgender students for harmful, discriminatory treatment, notwithstanding that we and our allies have successfully quashed these efforts wherever they have popped up.”

North Carolina’s passage of a law restricting restroom access in public buildings in 2016 cost the state billions of dollars in lost jobs and revenue. It was ultimately blocked in court.

“What states like Oklahoma, Alabama, Tennessee, and North Carolina have done time after time is find new ways to attack these kids for their political gains among radical voters,” said Human Rights Campaign state counsel Cathryn Oakley when the Oklahoma bill passed.

“Legislation targeting transgender youth in this way is a violation of both federal civil rights law as well as the United States Constitution,” Oakley added.