I think it is pretty clear by now that this woman is a paid hater, someone who is not driven by concern of children but by the joy she get out of hurting LGBTQ+ people.    If you support anything she is involved in you have to ask yourself why,  knowing she is not backed by science but she is pushing misinformation and lies.    Hugs 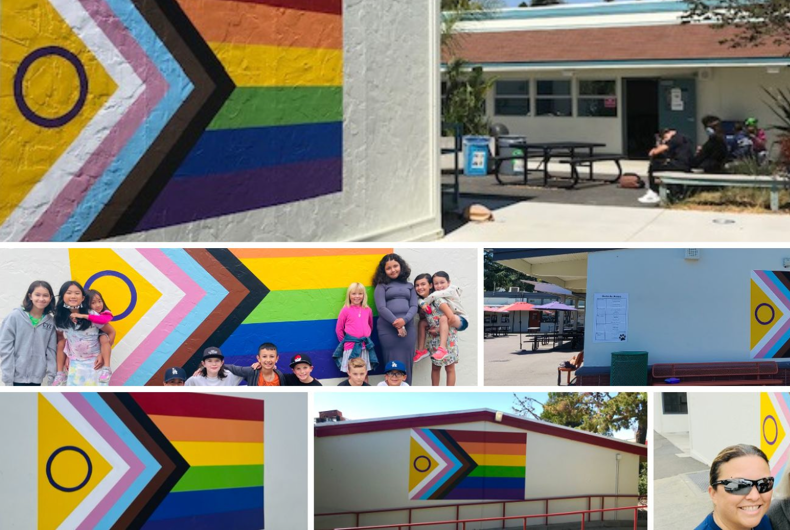 It didn’t take long for Chaya Raichik to show up.

On Saturday, a California school district revealed an LGBTQ-affirming art project on Facebook, months in the making between school officials, students, and LGBTQ allies.

About 24 hours later, Raichik, who goes by LibsofTikTok on social media, called on her army of supporters to terrorize the school district. She was only partly successful.

In February, officials with the school district in Castro Valley — nestled in the East Bay hills across from San Francisco — greenlit the mural project, proposed by two students.

“How do we do some real good work that is anti-bias and aligned with our obligation to combat the kind of racism, sexism, and other forms of bias and hate we encounter in our country?” Superintendent Parvin Ahmadi asked in an interview.

The students came up with the idea of painting progress Pride flags on all 15 of the district’s schools.

“Our board has always been very supportive, making sure that our LGBTQ+ students and families are welcomed and valued,” Ahmadi said.

Castro Valley Pride helped fund the project, and the schools each chose where to display the art. The progress flag adds a five-colored chevron to the classic rainbow signifying “inclusion and progression” of the transgender and racial justice movements. The flag’s purple circle on a yellow field represents inter-sex members of the community.

Castro Valley Unified posted the results on their Facebook page Saturday: “Progress Pride Flags are being painted as murals on each school campus. Aligned with our commitment to ensure every student feels safe and valued in our schools, on February 9th, 2022, the CVUSD Board approved the project.”

“Homeschool your kids” Raichik posted derisively. It wasn’t one of her best efforts.

While the school’s post did take some hits, favorable Facebook comments far outnumbered the haters’. Just 18 of 106 of the emotional reactions to the post signified “angry.”

On her own social media post sharing the town’s project, Raichik’s supporters were confronted by supporters of the flag murals. Numerous supporters sounded off in a way unusual for the Twitter account’s usual outrage echo chamber.

Nikki@xXxNICOLE911xXx posted a growling wolf with the text, “Anybody that discusses sexuality with kindergartners is a predator, not a teacher.” UncleMau@Maurici20218813 replied: “Where is that happening, exactly? #maga #pretend”

FinsToMyLeft@1thekel asked: “Can someone answer if the black on the flag represents ‘minor attracted persons’?” jinminjoon bf? sable⁷ 𖤐@AY0BANGTAN answered reasonably: “it represents black and poc people who are part of the lgbtqia community”

And this simple retort to Raichik’s command to homeschool, from baddonbasskid@badstateboy: “No.”

Raichik was banned from Twitter last month after inciting her mob to commit stochastic terrorism against a children’s hospital offering gender-affirming care for transgender patients. Her Twitter account was recently reinstated though.

However, after several rebranding attempts, Raichik found success in LibsOfTikTok by reposting TikTok videos and social media posts, primarily from LGBTQ people, that are framed to create outrage. Her anti-LGBTQ tweets on the account have gone the most viral and have influenced numerous Republican politicians and right-wing media pundits.

Since January, she has oft-repeated the conservative labeling of LGBTQ teachers and their allies as “groomers” (basically pedophiles). She has said that teachers who mention LGBTQ people are “abusive,” that gender-nonconformity and LGBTQ-allyship are both a “mental illness” and that schools are “government-run indoctrination camps” for the LGBTQ community.