Can these maga cult members be anymore clear on what they want in the US?   They do not want democracy of the people for the people, they want to rule.   Right now they see that way to rule is through Christian theocracy.   They think they are using the religious people and the religious people think they are using the republican politicians.  Either way the losers are the public, the people, because under either republican rule or the church rule the people have limited rights and no democracy to decide their future or how they live their lives.   She is Ok with authoritarians regardless of if it is the church leader’s enforcement of religious doctrine or if it is a single party rule like China.   But the ones who lose are the US people.    Hugs 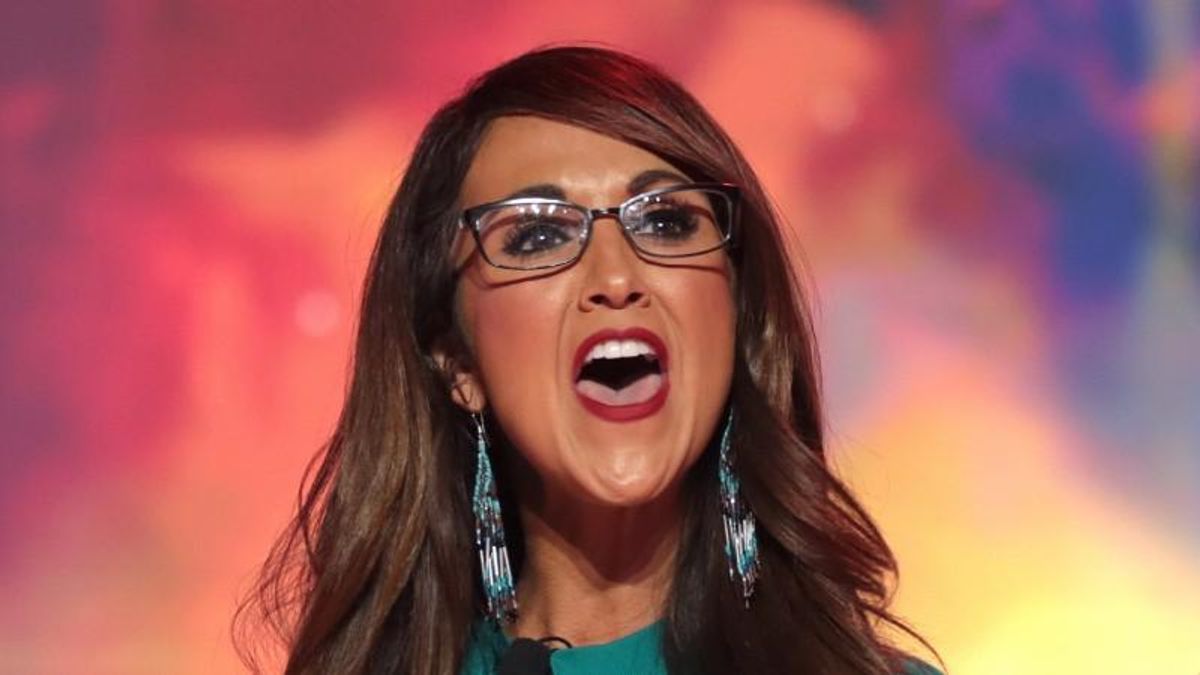 In a raucous speech at a Christian conference in Woodland Park on Friday, U.S. Rep. Lauren Boebert called for conservative churchgoers to put “God back at the center of our country” and defeat “the enemy” that she said is destroying it from within.

“God is on our side. The blood has been applied,” Boebert told the crowd at Charis Bible College in an hour-long speech that quoted heavily from scripture. “We are going straight into victory. You are all more than conquerors through God, through Christ who strengthens you every step of the way.”

Boebert and other speakers addressed a three-day conference held by the Truth and Liberty Coalition, a nonprofit started by Charis founder and far-right preacher Andrew Wommack, which aims to erase boundaries between religion and politics. “We see a Church unengaged in the public square because we have been conditioned to believe there is a disconnect between the secular and sacred,” the group’s website says. “There is not.”

In an earlier political conference held at Charis in April, Wommack urged attendees to “take over Woodland Park” and “take back Colorado” from what he called a “demon-possessed” government, The Gazette reported. His views have frequently been characterized as belonging to the dominionist movement, which seeks to place government under control of the Christian church and its interpretation of biblical law.

Though his organization rejects the label, affirming that it supports “preserving America’s constitutional republic of government,” Wommack frequently emphasizes the need for Christians to reclaim the “Seven Mountains” of influence, a key tenet of dominionist theology.

“We are the kings. We are the ones who rule,” Wommack said in a speech to the conference Thursday. “And when we don’t vote, then we allow those with different values — we increase their power. It’s Christians that have allowed this nation to go the way that it is.”

Endorsing baseless conspiracy theories alleging widespread election fraud, Wommack added, “If we got enough Christians to stand up and vote, we’d overwhelm all of their algorithms, and we’d beat their cheating.”

Over three days, speakers at the Truth and Liberty conference celebrated the Supreme Court’s rollback of abortion rights and called for Obergefell v. Hodges, the 2015 case establishing a right to same-sex marriage, to be overturned next. They denounced a long list of evils that included “wokeness,” cancel culture and Black Lives Matter, peppering their speeches with transphobic abuse and conspiracy theories about a “one world government.” One speaker referenced the Georgia Guidestones, an obscure public monument that far-right extremists alleged was satanic in origin and was destroyed in a bombing in July.

Boebert told the crowd that the country had been founded by men “fluent in the word of God,” calling for a “revival” that restores conservative Christian values in government.

“We need God back at the center of our country,” she said. “It’s time for us to position ourselves, and rise up, and take our place in Christ, and influence this nation as we were called to do.”

‘The last of the last days’

A first-term congresswoman from Silt, Boebert unseated veteran Rep. Scott Tipton in the 3rd Congressional District’s 2020 Republican primary and has gone on to become one of the most prominent voices on the GOP’s far-right wing. She helped lead attempts by former President Donald Trump’s supporters to overturn the results of the 2020 election, and tweeted “Today is 1776” on the morning of the Jan. 6 assault by pro-Trump rioters on the U.S. Capitol.

On Friday, she reserved some of her harshest words for the public health measures that restricted church attendance during the COVID-19 pandemic, which she called an “attack on our faith,” and she veered into apocalyptic rhetoric about “the end” drawing near.

“We know that we are in the last of the last days,” Boebert said. “It’s not a time to get upset about it. It’s a time to know that you were called to be a part of these last days. You get to have a role in ushering in the second coming of Jesus.”

Rep. Doug Lamborn of Colorado Springs also addressed the conference via a short prerecorded video focusing on the U.S. relationship with Israel, both of which, he said, have a “miraculous origin based on a belief in scripture.”

Boebert was preceded on stage by far-right political commentator Eric Metaxas, a prominent election denier who is among the defendants named in a defamation lawsuit filed last year by a former employee of Denver-based Dominion Voting Systems.

Metaxas repeatedly likened conservatives in the present-day United States to the victims of Nazi Germany, saying that “precisely what happened in Germany” is “happening here now, because of the silence of many, if not most, Christian leaders.” Echoing the conference’s theme, he called the notion that churches shouldn’t be political “a lie from the pit of hell.”

Under the U.S. Internal Revenue Code, churches are automatically considered 501(c)(3) organizations, a designation that bars them from political activity. The Truth and Liberty Coalition is a 501(c)(4) nonprofit, which allows it to engage in some political advocacy, as long as such activity isn’t its “primary purpose,” and it doesn’t directly contribute to or coordinate with candidates for office. Conference organizers clarified that Boebert, who is running for reelection in November, appeared at the conference “in her official capacity.”

Metaxas, however, urged Christian churches to follow through on political activism regardless of the consequences.

“If I say this candidate is the one you should elect because he will help these things, and I mention the name Donald Trump … the idea that Christians shouldn’t be allowed to say that is insanity,” he said.

“We have participated in our own silence,” Metaxas continued. “Somehow we’ve said, well, I don’t want to lose my 501(c)(3) status — folks, better that we would never have 501(c)(3) status than that it would muzzle us from speaking the truth of God.”