Remember these are a large part republican’s brownshirt maga enforcers using threats of violence and scaring people into closing legal events and removing legal books while white washing the US history.   They are the violent threat issuing part of the US Taliban and as the end of the article says they are normalizing political violence targeting the LGBTQ+ events / people.   Hugs 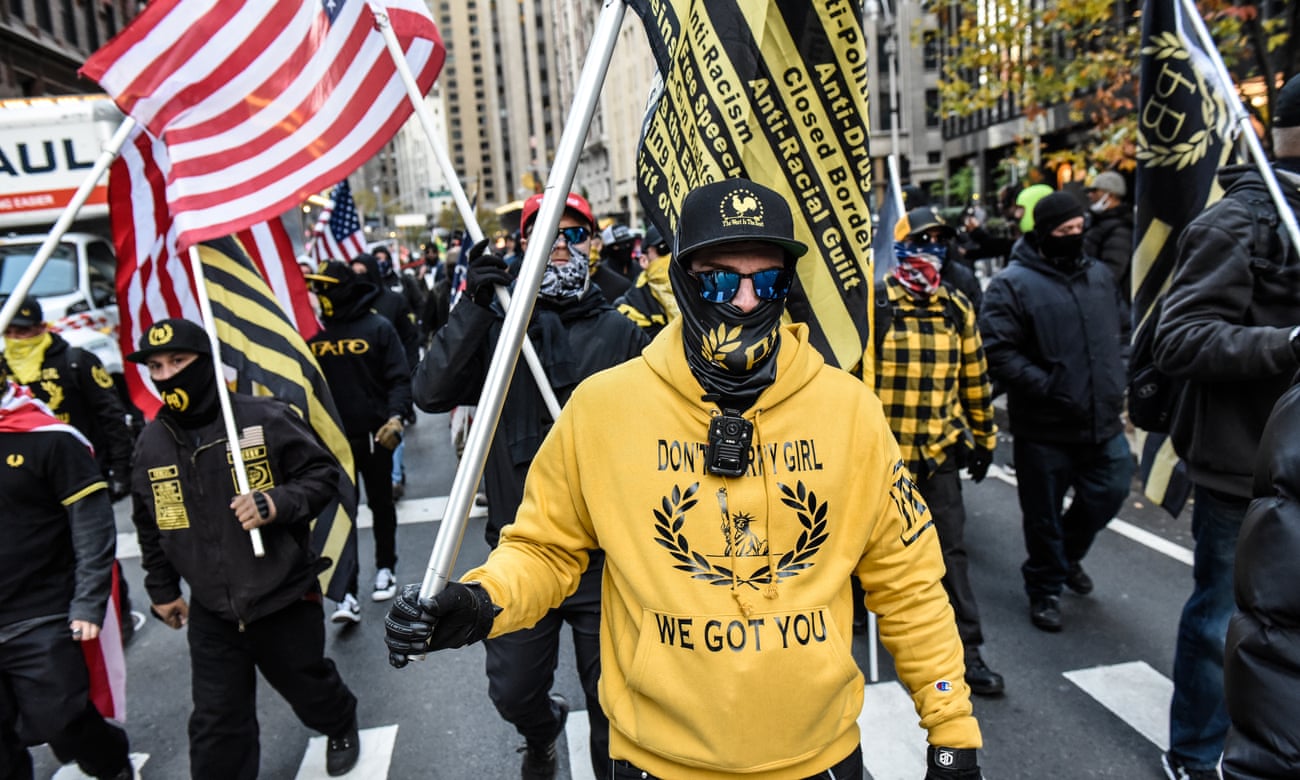 The document is so dowdy and formal it resembles the annual minutes of a society of tax accountants. Its index lists sections on “objectives” and “rules of engagement” and carries an “addendum” that provides recommendations for hotels and parking.

On the cover, two words give a clue to the notoriety of the group that produced it: “MAGA” and “WARNING”. That and the date: 5 January 2021, the day before the US Capitol attack.

What goes unsaid on the cover and is barely mentioned throughout the 23 pages is that this is the work of one of the most violent political gangs in America, the far-right street fighters who Donald Trump told to “stand back and stand by”: the Proud Boys.

The document, published by the Guardian for the first time, gives a very rare insight into the meticulous planning that goes into events staged by the far-right club.

The Proud Boys have been designated a hate group by the Southern Poverty Law Center and are alleged to have acted as key organizers of the violent assault on the Capitol.

In the wake of January 6, which has been linked to the deaths of nine people, the New York march featured in the document was called off and the strategy so fastidiously laid out was never implemented. But the document remains sharply revealing.

It shows the lengths to which the Proud Boys go to prepare for potentially violent encounters and then to cover their tracks – something prosecutors have stressed but that has never been seen in the group’s own words. It exposes the militaristic structure and language the Proud Boys have adopted, and their aspiration to become the frontline vigilante force in a Trump-led America.

It also provides clues as to how the group continues to spread its tentacles throughout the US despite the fact that many of its top leaders, including its national chairman, Enrique Tarrio, are behind bars awaiting trial on charges of seditious conspiracy.

The purpose of the document is to provide a “strategic security plan” and call to action, summoning Proud Boys members to a pro-Trump Maga march that was scheduled for New York City on 10 January 2021. That was four days after Congress was to certify Joe Biden’s victory in the 2020 presidential election – the occasion that would be targeted by the fatal insurrection.

The document was obtained from a Proud Boys member by the extremism reporter Andy Campbell as he researched his new book, We Are Proud Boys: How a Right-Wing Street Gang Ushered in a New Era of American Extremism. The book will be published on Tuesday. Campbell shared the document with the Guardian.

The author of the document is Randy Ireland, who as president of the group’s New York branch, the Hell’s Gate Bridge Chapter, is one of the most prominent Proud Boys in the US north-east. The paper was circulated through Telegram, the encrypted chat app widely used by the Proud Boys as an organizing tool, to at least nine other chapters in New York and beyond.

Campbell told the Guardian the decentralized structure of the group, into what it claims are 157 active chapters in all but three states, is one of the Proud Boys’ greatest strengths, as reflected in the autonomous nature of the New York planning.

“Chapter leaders like Randy can create their own events, run independently of each other,” Campbell said. “Enrique Tarrio and other leaders are in prison, but these guys are going to continue what they are doing.”

‘We will not disappoint’

The language in the planning paper is overtly militaristic. Ireland designates himself “General of Security Detail”, while his underlings in the chain of command are “VPs” of “Recruiting”, “Scout Security” and “Team Leads”.

The plan is for 60 or so Proud Boys at the 10 January event in Manhattan to be corralled into seven “tactical teams” of five to eight men each (they are all men, as one of the overriding values of the group is misogyny). Members are told to bring protective gear, including “knife/stab protection, helmets, gloves, boots etc” and to make use of radio channels, walkie-talkies or Telegram to communicate with each other.

They are to stick together in groups and under no circumstances allow “Normies” – ordinary Trump supporters who are not Proud Boys – or “Females” into their ranks.

“Their presence will jeopardise the health and safety of all those involved with Security, and simply cannot be allowed to happen!” Ireland writes.

Maps reproduced at the back of the document show positions “scouts” and “tactical teams” should adopt at key points along the route of the march, which was planned to start at Columbus Circle and pass Trump Tower.

“That spot is understood in a very public way to hold special meaning for us,” the paper says, referring to Trump’s home on Fifth Avenue. “WE WILL NOT DISAPPOINT!”

Campbell, who has been reporting on the Proud Boys since they started turning up at Trump rallies in early 2017, describes them as America’s most notorious political fight club. In the planning paper, he sees equal parts fantasy and danger.

“These guys see themselves as super soldiers, like some sort of military outfit,” he said. “On one level it’s funny, as nothing is in fact going to pan out the way they say it will. But on another level, it’s alarming because it shows how much thought they put into this stuff.”

In We Are Proud Boys, Campbell traces the group from its birth in 2015-16 through to its central role on January 6 when a member, Dominic Pezzola, became the first person to breach the US Capitol. At least 30 Proud Boys have been charged in relation to the insurrection, including Tarrio and four others accused of seditious conspiracy – among the most serious indictments yet handed down.

The group was invented by the British-born founder of Vice magazine, Gavin McInnes, who branded himself a “western chauvinist” and peddled in bigotry. McInnes floated the Proud Boys name on his online chatshow in May 2016, introducing them as a “gang” and inventing a uniform, a black Fred Perry polo shirt with yellow trim.

McInnes was careful to brand his creation as harmless fun, a satirical male-only patriotic drinking club that later attached itself to all things Trump. But Campbell argues that from the outset political violence was baked in.

A Proud Boy was an organizer of the 2017 Unite the Right rally in Charlottesville, Virginia, during which an anti-fascist protester was murdered. The group has held violent gatherings in Portland, Oregon. Outside a Republican event in New York in 2018, several members were arrested and charged with felonious assault.

Proud Boys membership is structured into four ranks, known as “degrees”, the fourth granted once you “get arrested or get in a serious violent fight for the cause”, as McInnes himself explained. In an interview with Campbell for the book, McInnes denied promoting violence and insisted the Proud Boys were never proactively aggressive, only reacting to leftwing attacks.

That official line is reiterated in the document published by the Guardian. Ireland is careful to portray the Proud Boys as a defensive group.

He writes: “If any violence does spout off, all Proud Boys are expected to respond immediately – only so far as to eliminate and end that threat to them or others. VERY IMPORTANT: Once the threat has been neutralized, WE STOP!”

But there is a glaring contradiction: Ireland presents his chapter as a non-violent organization yet it goes out seeking violence. He assigns the group, uninvited, the role of a vigilante police force.

“We are there as the first line of defense for all event attendees,” he writes, then contradicts himself by saying the only role of the Proud Boys is to play a “back-up role” to law enforcement and to “force them to do their jobs”.

That speaks volumes. It carries the implication that if the police will not assail anti-fascist protesters, Proud Boys will.

“I’ve reported at Proud Boys events where they stood back and relaxed as police lobbed teargas and other munitions into the crowd of counter-protesters,” Campbell said. “Then the Proud Boys didn’t have to do what Randy Ireland is hinting at here – step in and do the fighting themselves.”

For Campbell, the most disturbing aspect of the document is that, with its soft-lensed double-talk and contradictory meanings, it falls into arguably the main ambition of the Proud Boys: the normalization of political violence. Despite having so many leaders behind bars, the group is prospering.

As new chapters pop up, Americans are increasingly inured to the idea of heavily armed gangs in public settings. Proud Boys have posed as “security details” at anti-abortion rallies, anti-vaccination demonstrations, pro-gun protests and of course Trump rallies.

“The street-level violence the Proud Boys helped to create is now being carried out by regular people,” Campbell said. “You saw it on January 6, you see it at Planned Parenthood and LGBTQ+ events where people are harassed and attacked by everyday Americans.”