This one of the most watched loudest voices in right wing media.  Spreading more lies so more people will be targeted for violence and more LGBTQ+ events will get shut down by the Proud Boys gang thugs enforcement arm of the republican party.    Grooming is when someone builds a relationship, trust and emotional connection with a child or young person so they can manipulate, exploit and abuse them. Children and young people who are groomed can be sexually abused, exploited or trafficked. Anybody can be a groomer, no matter their age, gender or race.   Teachers are not groomers, nor are drag queens reading stories with parents present.  The ones sexualizing kids is the right who are claiming anything they don’t like is sexualizing kids, and anyone they are against is a grooming pedophile.   Kids understand gender from the time they notice mommy and daddy, brother and sister, and kids understand love attraction again because they see it at home, on TV, at church, anywhere there are people in relationships.   They understand it if Mr. T and Mr. B are a couple that they love each other like their family.  They are not sexualized to see a picture of a straight spouse on a teacher’s desk and they are not sexualized to see a picture of a same sex spouse on a teacher’s desk.   It doesn’t sexualize them in anyway.   It is just the world around them.  What does sexualize them is what the right wing is doing, making children a sexual pawn to criminalize / ban everything you don’t like in society.  Don’t bring the kids into your hate, be honest and just say you hate some and are against it.   Don’t hide behind the kids.   Hugs 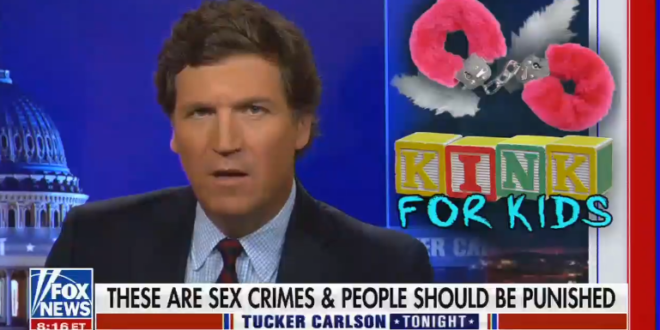 “In a healthy country, with an intact social fabric, neighborhood dads would give out instant justice to anyone who even thought about sexualizing their kids.

“And if you doubt that, go out and try it in Bulgaria or South Africa or the Solomon Islands. Good luck. Let us know how that ends, if you can still speak.

“We are not exactly sure what that means, but if it’s sexually abusing children — yeah, that is what’s happening. But the term groomer is now hate speech, says NBC News.

“What you’re seeing is a society that hates children. You would have to hate children in order to sexualize them. Because sexualizing children screws them up for life — ask anyone to whom it has happened — period.

“This is an attack on your children and you should fight back.” – Tucker Carlson, on last night’s show.