This is highly illegal and the trump people did it, repeatedly.   It makes all future elections unsecure if those machines are used again.   Will the trump maga cult be punished for these attacks on the voting machines?   Hugs 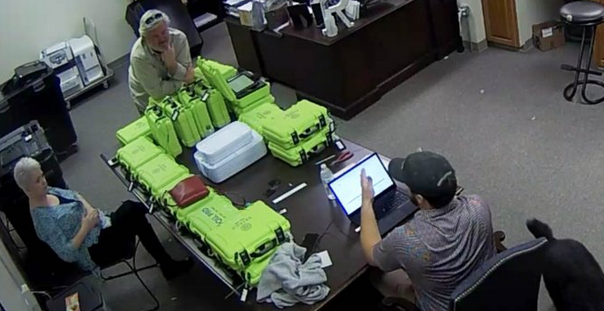 Newly released videos show allies of former President Donald J. Trump and contractors who were working on his behalf handling sensitive voting equipment in a rural Georgia county weeks after the 2020 election.

One such incident took place on Jan. 7 of last year, the day after supporters of Mr. Trump stormed the Capitol, when a small team traveled to rural Coffee County, Ga.

The group included members of an Atlanta-based firm called SullivanStrickler, which had been hired by Sidney Powell, a lawyer advising Mr. Trump who is also a conspiracy theorist.

Videos show allies of Donald Trump and contractors who were working on his behalf handling sensitive voting equipment in a Georgia county weeks after the 2020 election. It was not immediately clear what, if anything, was done with any data. https://t.co/AZBcY7c5JR

Among those seen: Cathy Latham, who is under criminal investigation for posing as a fake Trump elector.https://t.co/6YXatbCTmv

Illegal loans, video, etc etc etc and yet no one is in jail or at least been shot dead. If it were black people doing this………………….

Gustav2 • an hour ago • edited

Doug Logan paying of his mortgage after the shenanigans was reported in Sarasota about a year ago. He is connected to Michael Flynn, Charlie Kirk, Chris Pavloski, Caroline Wetherington, Steve Bannon, Andy Badolato, and especially Patrick Byrne.

After the investigation, Cyber Ninjas concluded there was no fraud in AZ and confirmed President Biden’s victory, he claimed the company was in bankruptcy. Now Logan says he will start a new company. (Hey, he has 12 kids to support)