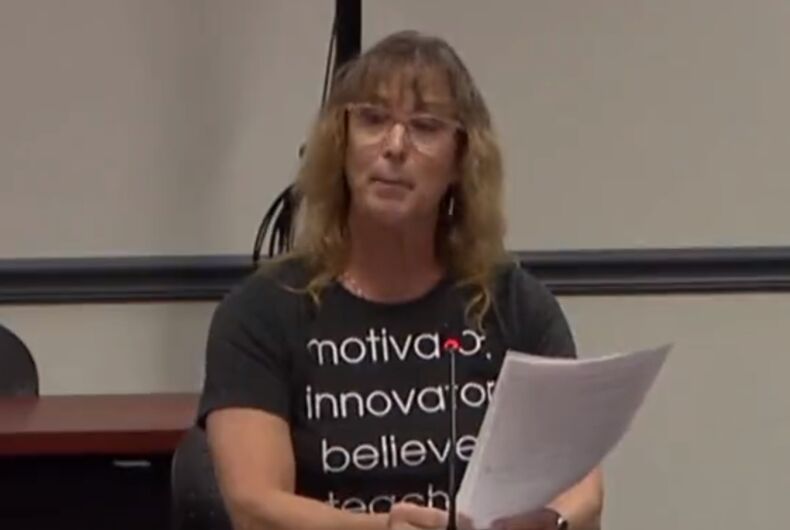 A teacher is making waves on Twitter for her impassioned speech before the Ohio State Board of Education in support of trans students.

Dawn Riggs, a teacher of 33 years, was testifying against a resolution that would require Ohio schools to out trans and nonbinary students to their parents, allow teachers the right to refuse to use a student’s preferred name and pronouns, and require students to participate on sports teams based on their sex assigned at birth, effectively excluding trans girls from school sports.

The “Resolution to Support Parents, Schools, and Districts in Rejecting Harmful, Coercive, and Burdensome Gender Identity Policies” was introduced by Board member Brendan Shea as a reaction to new federal Title IX rules that expand protections for LGBTQ students.

Riggs spoke before the board about the difference it makes to support trans students.

“I have many trans and nonbinary students in my classes. My experience with transgender individuals spans my entire career. I am still in touch with some of those folks. Every single former student has told me how much knowing they had a safe space to be their authentic selves has meant to them”

Riggs said students have opened up to her about their trauma and suicidal thoughts, and their “wish to disappear.”

“The fact that they could walk into my classroom, be called the name they chose, and be called by the pronouns that reflect their lived experience made a difference. Even if no other adult in their life affirmed their identity, they knew they would be safe for at least a little while each day.”

She also lambasted the board for considering allowing schools to out students to their parents.

“Our students must be able to choose the time and the manner in which they share their transness and with whom. It is not our place to force them to do so. I urge you to oppose this hateful and misguided rhetoric.”

Teachers: this is the person you should strive to be.

On Twitter, people praised Riggs for her words and actions.

“If more people had her attitude and kindness there would be a lot more happier trans and non binary people in the world,” said another.

Three members of the Board of Education also released an official statement against Shea’s resolution, writing that they “are embarrassed that our time as a board will be spent discussing an issue that so egregiously works to bully children and threaten adults.”

“Shea not only presented a resolution full of factual errors and based in religious pedagogy,” the statement continued, “but he also submitted a resolution that works to detract our body from the work many of us were elected to do.”