The republicans know it is false, but they believe if they keep saying it the people will believe it.

“If you tell a lie big enough and keep repeating it, people will eventually come to believe it. The lie can be maintained only for such time as the State can shield the people from the political, economic and/or military consequences of the lie. It thus becomes vitally important for the State to use all of its powers to repress dissent, for the truth is the mortal enemy of the lie, and thus by extension, the truth is the greatest enemy of the State.”   Joseph Goebbels

The republican candidates know their base won’t bother to fact check, they won’t hear it is a lie because right wing media won’t tell them the truth, and they want to believe it because it is in reality an attack on trans people with using the word trans.  They make up stuff show that they are anti-trans.   Think of the lies they are telling.  Kids pooping and peeing in classrooms?  Rogan said that a teacher was using a litter box in the front of the classroom?    Let’s think this through, a teacher whips out his junk in front of kids and still has a job?  Can’t say gay or discuss gender but showing your genitals is okay?   If these people would just think about what they are saying, they would see how stupid it is.    Hugs 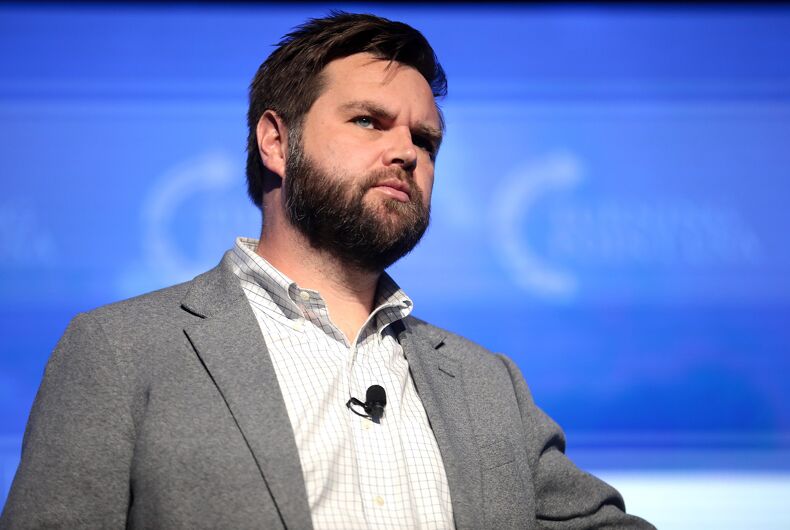 Republican Senate candidate J.D. Vance appears to agree that it’s “crazy” that schools are putting out litter boxes for students to defecate in and that kids are being allowed to act like chipmunks in schools.

Vance is just the latest Republican to publicly say that he believes in one of the most bizarre urban legends to gain popularity this year: that students who call themselves furries are demanding that schools provide them litterboxes and let them act like animals in schools.

Vance was on The Bill Cunningham Show – a Christian talk radio show – this past Wednesday when the host brought up student-furries.

“There are some students identifying as cats and they bring kitty litter with them to school,” Cunningham said. “Some identify as dogs and they have to be called Fido and ‘little pussycats’ instead of human beings.”

“One of the worst things is, if they do not use the proper preferred nouns and pronouns of other students, K through the 12th grade, schools will be required to socially transition using child-selected names and pronouns in school,” he continued.

“Minor kids like yours J.D. Vance will not be notified if your child wants to socially transition to a different gender or to an animal species,” he said. “Should you be entitled to know if your seven-year-old identifies as a chipmunk?”

Instead of telling Cunningham that his question was ridiculous, Vance took it seriously: “Uh, I think I’m very much entitled to know that. What a crazy point we’ve reached in this country, Willie, where schools are doing this stuff without the approval of parents.”

Vance then said that he supported Florida Gov. Ron DeSantis’ (R) Don’t Say Gay law, saying that it bans books that “are sexually explicit material that propagandizes and encourages children to take different identities and to engage in sexually explicit acts.”

NEW: J.D. Vance is the latest high-profile GOPer to amplify a furry hoax.

HOST: "[You'll] not be notified if your child wants to … transition to a different gender or animal."

JD: "I'm entitled to know that. What a crazy point we've reached … where schools are doing this." pic.twitter.com/DU260SHXZk

Vance is facing Rep. Tim Ryan (D-OH) this November in the general election. The seat is open after Sen. Rob Portman (R-OH) announced that he would not be seeking reelection this year. RealClearPolitics’s average of recent polls shows that the two candidates are neck-and-neck in the race with Vance averages a 0.8% lead.

Vance is just the latest Republican to say that they believe in the bizarre myth of student-furries running amuck in schools. The myth has disrupted schools across the country and forced them to respond to angry parents who believe that this is happening, all while no one is able to provide any proof that this supposedly widespread phenomenon is actually happening.

Just this week, popular conservative radio host Joe Rogan told former Rep. Tulsi Gabbard of Hawaii that he knows someone who knows someone who said that a school had a student who is a furry and that they had to put a litter box in the restroom for her.

“So this girl goes into the litter room or to the girl’s room and urinates or whatever — I don’t know if she poops in it, that’s pretty gross,” he said.

“That’s the worst thing in the world about owning cats, you gotta clean that box of piss every day,” Rogan continued.  “Imagine how f**king crazy that is. You’re a human and you prefer a litter box? You want to piss into a pile of sand rather than use a bathroom, flush a toilet, wipe yourself, like a normal person. Like, you’re so crazy with what you think an animal is that not only have you said this, but you’ve conned the school into putting this f**king litter box in a girl’s room. That’s just bananas.”

An early example of the stories about students identifying as house pets and demanding litter boxes was Michigan activist Lisa Hansen. Because Hansen opposed federal regulations allowing trans students to use school restrooms matching their gender identities, she claimed that students who identify as cats were allowed to use litter boxes in one school’s unisex restroom.

A Michigan school superintendent was forced to write an email to parents debunking such a lie. An Oregon public school district superintendent was also forced to send a similar email after one social media user claimed that furries were wearing leashes and being petted by other students at local schools.

Nevertheless, the lie has been repeated by right-wingers, including by Nebraska Sen. Bruce Bostelman (R).

During a televised debate, Bostelman claimed that student “furries” were allowed to interact with teachers by meowing and barking. He also said that one student who was denied a litter box later defecated on a classroom floor. Bostelman later admitted that the story wasn’t true.

It has been spread online by anti-LGBTQ activists like Chaya Raichik of LibsofTikTok, when she pushed a lie that a second-grade Texas schoolteacher encouraged students to become furries. The Austin school district disavowed the claim as misinformation.

Similarly, Christian hate pastor Aaron Thompson and anti-LGBTQ televangelist Andrew Wommack both said that schools allow students to identify as animals and demand litter boxes in classrooms. Michigan Republican Party Co-Chair Meshawn Maddock also repeated the lie, as did Heidi Ganahl, the Republican candidate for governor of Colorado. She claimed that student “furries” are identifying as cats in over 30 different schools in the state.

Rep. Lauren Boebert (R-CO) has claimed that a father in Michigan told her that his son got into trouble when he stepped on the tail of a student who identified as a furry.

Reuters published a fact check in July that said there is “no evidence of them disrupting classrooms or schools developing a policy of including them as a formal identity.”