This guy has a long history of hating the LGBTQ+ community.   He hates gays and trans people for some reason and doesn’t even bother to understand what being trans is.  Worse he doesn’t understand that what these don’t say gay bills do is not stop gender indoctrination from happening in schools, but it makes sure that only cis gender is accepted, and that only straight orientation is seen.   The object of these bills is to deny gays, lesbians, and trans people / kids exist.   By not letting it be talked about or married same sex teacher show their spouse they are telling the kids that it is bad to be gay, lesbian, or trans and it is bad to be in a same sex marriage.   By removing the books about gay, lesbian, and trans kids from libraries the kids are denied seeing people in stories that feel and are like themselves.   It is an attempt to wipe the LGBTQ+ from society.   But it won’t make kids stop being gay or having gender identities different from the born gender assignment.   Kids were born gay long before positive stories about gay people were written or positive gay characters in movies.   Same with gender identities.   These things are inborn, you are born with sexual orientation and gender understanding, they are not something you can get from others, it is not a disease, it is not caused by sexual abuse or reading about it in a book.    Hugs 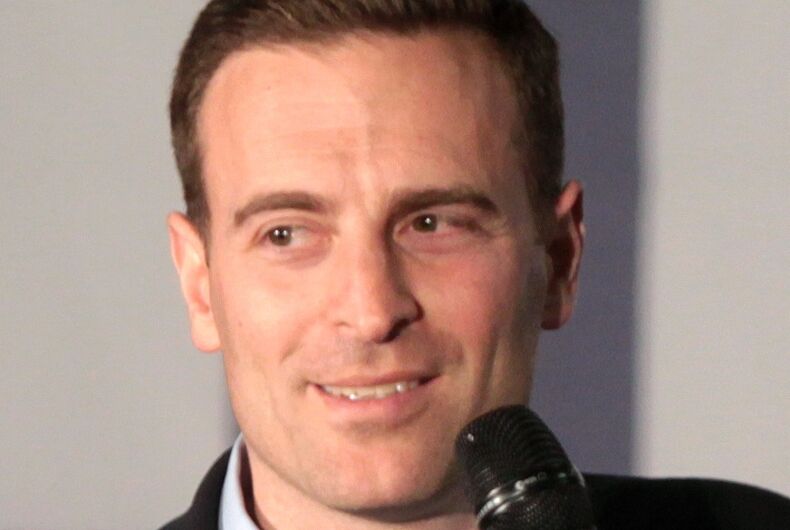 Republican Senate candidate Adam Laxalt of Nevada is getting attention online for comments he made earlier this year about how LGBTQ people want to “indoctrinate” young children with “transgenderism in kindergarten” during a discussion of child sex abuse.

Laxalt appeared on the Breitbart News podcast on March 31 and the host brought up the conservative accusation that Supreme Court Justice Ketanji Brown Jackson is “soft on child predators.” Laxalt responded by bringing up Florida’s Don’t Say Gay bill, which banned discussions of gender identity and sexual orientation in younger grades and restricted such discussions in older grades.

He said that there “can’t be virtually any parents that would actually support the indoctrination, by strangers, of their children in schools,” referring to learning about diverse groups of people.

“And so, you know, kudos to DeSantis for signing this bill,” Laxalt concluded. “And then for going on offense.”

The Las Vegas Review-Journal asked Laxalt’s campaign about his comments and a campaign spokesperson said he was referring to “transgenderism in kindergarten.”

The spokesperson said that Laxalt’s opponent, Sen. Catherine Cortez Masto (D-NV), “should be explaining to Nevada parents why she has cozied up to fringe elements of her own party who push transgenderism in kindergarten.”

“Cortez Masto sides with the most vile elements of the radical left as they continue poisoning our education system,” the spokesperson said.

“We will not hide like the millions of those who came before us, who would be arrested for being gay, beaten and killed or given electroshock therapy,” Gender Justice executive director Sy Bernabei said in response to Laxalt’s positions. “No matter how much you try to break us, invalidate us and terrorize us, we will prevail.”

Laxalt has a long history of opposing LGBTQ equality. In 2018, HRC Nevada pointed out that Laxalt had an “obsession with attacking the LGBTQ community.”

This obsession included a 2014 statement against marriage equality and opposition to LGBTQ people serving openly in the military. In a 2010 op-ed, he wrote, “Senior officers and non-commissioned officers will have to, under the color of Military Law, proactively endorse and eventually foster homosexuality.”

RealClearPolitics shows Laxalt and Cortez Masto neck-and-neck in the election, with Laxalt averaging a 1.7-point lead in recent polling.

The left likes to talk about “democracy” while they try to kill it with propaganda.

Real democracy and real leadership is standing up against giant corporations on behalf of parents and children being bullied by the rich and the powerful.

Few do it better than @RonDeSantisFL. pic.twitter.com/S6XPkVl76D