The important part of this article is not what Marge Greene says about Alex Jones.   It is what her intern says about trashing the Bill of Rights and getting rid of the 1st amendment to create a theocracy.   He wants only Christians to be able to hold office, to have guns, and to be able to publish online.    Hugs 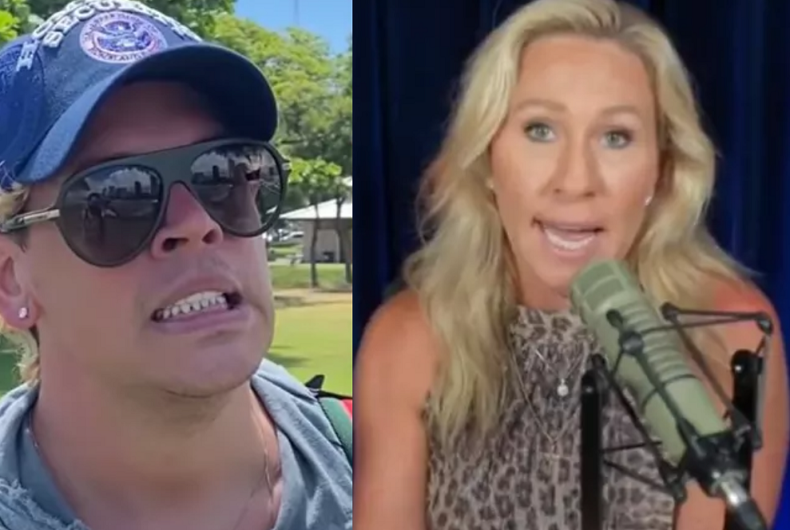 Rep. Marjorie Taylor Greene (R-GA) is defending Infowars host Alex Jones in the wake of the nearly one billion dollar civil judgment against him for defamatory claims he made on his radio show about the parents of the victims of the Sandy Hook Elementary School shooting, arguing that he is facing “political persecution.”

But while she argues that “freedom of speech” should allow Jones to avoid the consequences of defaming those kids’ parents – even as it inspired his followers to harass them and allegedly pee on the child victims’ graves – her most famous intern, Milo Yiannopoulos, is telling his followers on Telegram that the U.S. should ban blasphemy and “institute meaningful penalties for insulting, irreverent or contemptuous language about Our Lord.”

Yesterday a jury in Connecticut awarded $965 million to the parents of some of the victims of the 2012 Sandy Hook Elementary School shooting after Jones repeatedly claimed that the shooting was a hoax staged by actors.

One father of a six-year-old boy who was killed in the shooting said that Jones made his life a “living hell,” that his fans harassed him in the street, shot at his home and car, and made threats against him for years.

“As time went on, I truly realized how dangerous it was,” the father said during the civil trial. “My life has been threatened. I fear for my life, I fear for my safety.”

Greene was enraged that the jury would order Jones to pay damages in the defamation case.

“No matter what you think of Alex Jones all he did was speak words,” she tweeted yesterday after the verdict was announced. “He was not the one who pulled the trigger. Were his words wrong and did he apologize? Yes. That’s what freedom of speech is. Freedom to speak words. Political persecution must end.”

“I legitimately thought it might have been staged, and I stand by that, and I don’t apologize for it,” Jones said during the trial.

While Greene was arguing for such an expansive definition of free speech that includes immunity for deliberate defamation, someone from her office was saying that the U.S. should ban free speech when it comes to criticism of religion and God.

“Christian nationalism will succeed only if we are honest about the profound structural failures in the American system, and are prepared to do something about them,” Greene’s intern, Yiannopoulos – who identifies as ex-gay – wrote on the rightwing social media platform Telegram. “This will involve the commission of some pretty gigantic offenses against ‘American conservatism.’ For a start, we must be prepared to say that the Constitution and Bill of Rights are hopelessly broken, because of course they are.”

“You will know America is serious about saving itself, and that it has absorbed the scale of the undertaking, when you see a president adding his signature to revivified blasphemy laws, which will prevent the open promotion of sedition, institute meaningful penalties for insulting, irreverent or contemptuous language about Our Lord, and moreover restore to general society an understanding that words matter, they carry consequences, and they may not be capriciously and arbitrarily redefined by mentally unstable graffiti artists with PhDs,” he wrote.

“The wide disputational berth granted by the First Amendment and the destructive potentialities of the Second are privileges that can only be granted to Christians…. No other belief system produces individuals capable of responsibly wielding such daunting, awesome freedoms.”

“You cannot grant these powers to the citizenry without also requiring that every elected official and federal employee is a churchgoing Christian and that the nation explicitly identifies itself with Jesus Christ and governs in a manner informed by the Church,” he wrote.

“I ruined my knees in my 20s. Not through prayer, as if you had to ask. I think about this every day when I pray now, and I am disgusted by it.”

While Greene has not made such an extreme statement against freedom of speech for non-Christians, she, like Yiannopoulos, has vocally defended Christian nationalism, the idea that the U.S. should be a Christian nation and that the government should give Christianity a privileged position in politics.

“We need to be the party of nationalism and I’m a Christian, and I say it proudly, we should be Christian nationalists,” Greene said last month.