Scary, more and more Christian nationalists that have no idea of the true history of the US are forcing their way into schools, trying to force even more kids to think the US was founded as a Christain nation.   The question is do they really believe this or were they taught this incorrectly in-home school or a Christian school or is this a plot by one of the Christian nationalist organizations to force more kids to be incorrectly taught.   But does it matter?    We are almost at a tipping point.   The religionist have managed to get very close to taking over enough to change how history is taught in enough schools to make what they want become true.   This is now become a crisis in the US, religion, specifically the Christian religion has tried for almost as long as the nation has existed to take over, and they are very much on the cusp of doing so.    it terrifies me because I know how these people deal with those that they dislike or don’t agree with their god.   Hugs 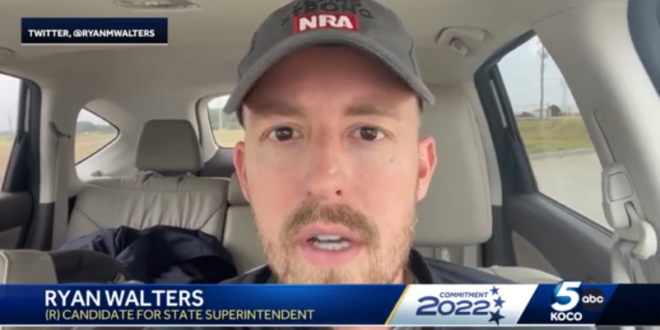 A new controversy has arisen surrounding the race for state superintendent. If elected, Republican Ryan Walters would have teachers undergo patriotic education offered by a conservative Christian college in Michigan.

Walters has said in the past students are not being taught U.S. history accurately and argued this could be a way to reverse the trend. His opponent, Jena Nelson, called the plan bizarre.

“They are now advocating that our students are not taught history but instead are taught indoctrination, instead taught this country is an evil place full of bigoted racists,” said Ryan Walters (R), candidate for state superintendent.

If your history is full of idealized heroes, it’s not history, it’s mythology.

What he calls “true history” is nationalist mythology. He’s too fucking stupid to know the difference, and in Oklahoma, he’s likely to win simply by virtue of being a Republican.

It sounds like, I dunno…indoctrination. But that can’t be right, ’cause he’s against that!

That’s what I can’t stand! These white nationalists want a sanitized view of America where everything was sunshine and lollipops. It’s a land where everybody loved Jesus and the Native Americsns are only mentioned when talking about the first Thanksgiving and, sure we had slavery, but it wasn’t so bad and everything was great for Black people after the Civil War. Ugh.

But it absolutely has to begin with how America was founded as a Christian nation. THAT”S the history they’ll use to start. From there, it’ll be whatever Christian bullshit and nuttiness they can toss in to THE history.

As James Huber points out:

…The Founding Fathers had no reason to be vague. There was no ACLU, no “Activist judges.” If they had wanted a Christian Nation they could have written:

God Almighty, in Order to form a true Christian Nation, establish Divine Justice, insure adherence to His Laws, provide for the defense of His Church, promote His Word, and secure His Blessings of Liberty to ourselves and our Posterity, has led us to ordain and establish this Constitution for the United States of America.

We the People of the United States, in Order to form a more perfect Union, establish Justice, insure domestic Tranquility, provide for the common defense, promote the general Welfare, and secure the Blessings of Liberty to ourselves and our Posterity, do ordain and establish this Constitution for the United States of America.