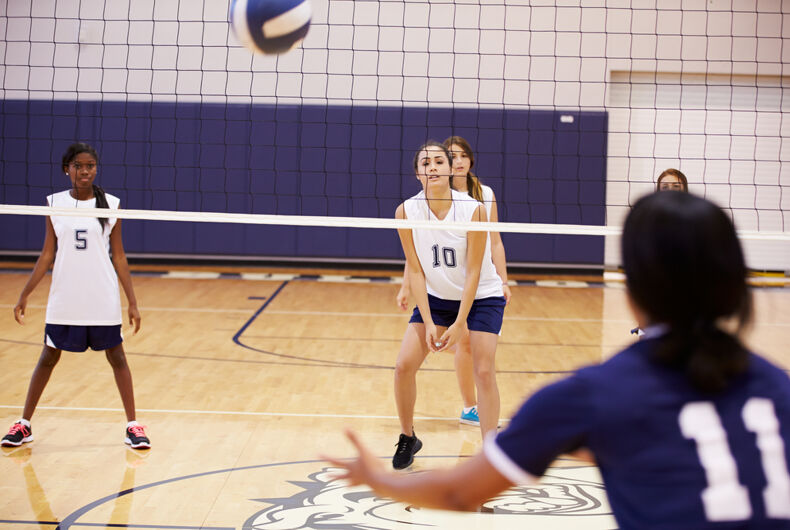 Nearly two months after a North Carolina girls’ high school volleyball game resulted in a one team’s player being “forcefully struck” by a spiked ball, and later a ban on playing any more games with the opposing team, a school board’s meeting notes reveal the opposing team’s high school is being barred from competing against county schools for allowing a transgender girl to play on their team.

On September 2, the two girls’ volleyball teams, from Hiwassee Dam High School in Cherokee County and Highlands School in Macon County, faced off at Highlands in an early evening match. A recording posted to high school sports site Maxpreps, published on September 9, reveals during one game, a player from Highlands spikes the ball from the near side of the court to Hiwassee, striking a player, who drops to the floor.

The video shows coaching staff attending to the Hiwassee player, while the Highlands players huddle, waiting for the outcome. Moments later, the injured player rises to her feet with the help of staff and walks off the court, cheered on by players and fans from both sides.

Two weeks later, the Cherokee County Board of Education met in regular session, where concerns over the incident were aired by attendees and principals from the district’s three high schools, including Hiwassee.

Those “safety concerns” centered on the player who spiked the ball, who is transgender.

It’s unclear from meeting notes how or when the player’s transgender status became known to the board.

“The competitive advantage issue certainly has to come up in any scenario with that type of transgender conversion, per se,” said school board vice-chair Jeff Martin, according to Christian Education First Alliance North Carolina. “I can tell you that the board wasn’t searching out this kind of thing. It was brought to our attention based on safety concerns.”

Board chair Arnold Mathews described the injured player as “forcefully struck” for Channel 9 News. Board member Jeff Tatham claimed the video of the injury was conclusive.

“The biggest thing for us, especially after seeing the video of the injury, we felt very strongly that it was a safety concern,” Tatham said. “I think most of the board members also felt like there’s a competitive advantage issue.”

Sentiment in the meeting was not universal. Joseph Watson, Athletic Director of Murphy High, advised the Board that feedback from his players and parents revealed the majority wanted to play Highlands and none of his parents expressed concerns. Jordan Lovingood, the school’s volleyball coach, said their school’s team had played against Highlands, including the player in question, for four years running, and that none of her players wanted to forfeit games against the school.

Another Murphy High volleyball coach, Amanda Johnson, said there was always risk of injury, no matter the player, and she’s seen other girls hit the ball harder than the one on the video. She added that a Murphy football player was recently injured playing on turf-field, and “because we aren’t used to playing on turf-fields, should we not play that game because it’s unsafe and our players aren’t used to that type field?” she asked, according to the board meeting notes.

But sentiment against the trans player and Highlands School was high. Andrews High School principal Lance Bristol said he would decline to play Highlands based on feedback about safety and fairness, and said, “AHS is willing to take that on and they will embrace it.”

Jason Murphy, a Republican running for a seat on the board in November’s election, said the board should vote on forfeiting all games against Highlands “based on their morals, ethics, and Christian upbringing.”

After additional discussion and comment, according to meeting notes, the board considered the question of allowing continued competition with the Highlands volleyball team. Jeff Tatham made a motion that “we as a county not participate in any upcoming games with varsity and junior varsity against Highlands due to safety concerns.” The motion was carried, 5-1.

When reached for comment, Murphy High volleyball coach Amanda Johnson, also a counselor at the school, told LGBTQ Nation, “I’m sorry. I cannot comment about that.” Highlands School principal Brian Jetter also declined to speak about the issue: “I don’t have any comment on that, but thanks for calling.” A message to Keesha Curtis, the lone dissenting vote on the Cherokee School Board to forfeit all games with Highlands School, went unanswered.