Lets be honest what the furries thing is about.  It is about attacking trans kids without using the word trans.  It is adults mocking the idea of identifying with a different gender than your born identified sex.  It is stupid and another example of the right making up something that is not happen and not real simply to create outrage to be offended over.    Hugs 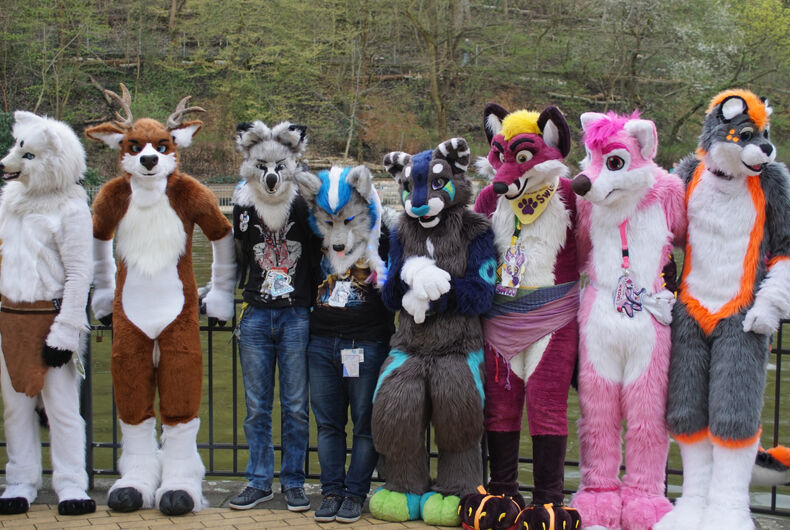 A school board in North Carolina considered a proposal to ban furry costumes in schools after they say they received numerous complaints about students dressing up as animals and using litter boxes in school restrooms.

Jeff James, superintendent of Iredell-Statesville Schools, said that he’s spent hours responding to emails and messages on social media about the rumor. He said that the rumors are false and that there is no evidence that students are bringing litter boxes into school restrooms.

But that didn’t stop school board member Bryan Shomaker from supporting the proposal to ban ears, tails, gloves, collars, or full furry costumes from being worn in schools. The proposal has exceptions for school spirit days and theater.

“We’re trying to address it before it becomes a major problem,” he said at a school board meeting.

But some parents were angry that it was even being discussed.

“We have classrooms without teachers, and you’re wasting your time focusing on a kid at a Scotts Elementary Panthers basketball game who wants to wear a cat ear headband,” said parent Jean Foster.

Lincoln County Schools in North Carolina was also the subject of furry rumors.

“There is nobody identifying as a cat at North Lincoln High School and we have no litter boxes!!!” an employee wrote in a Facebook group. “Quit spreading this stupidity!”

A spokesperson for Lincoln County Schools told The Charlotte Observer that there have never been litter boxes in any of its schools.

An early example of the stories about students identifying as house pets and demanding litter boxes was Michigan activist Lisa Hansen. Because Hansen opposed federal regulations allowing trans students to use school restrooms matching their gender identities, she claimed that students who identify as cats were allowed to use litter boxes in one school’s unisex restroom.

A Michigan school superintendent was forced to write an email to parents debunking such a lie. An Oregon public school district superintendent was also forced to send a similar email after one social media user claimed that furries were wearing leashes and being petted by other students at local schools.

Nevertheless, the lie has been repeated by right-wingers, including by Nebraska Sen. Bruce Bostelman (R).

During a televised debate, Bostelman claimed that student “furries” were allowed to interact with teachers by meowing and barking. He also said that one student who was denied a litter box later defecated on a classroom floor. Bostelman later admitted that the story wasn’t true.

It has been spread online by anti-LGBTQ activists like Chaya Raichik of LibsofTikTok, when she pushed a lie that a second grade Texas schoolteacher encouraged students to become furries. The Austin school district disavowed the claim as misinformation.

Similarly, Christian hate pastor Aaron Thompson and anti-LGBTQ televangelist Andrew Wommack both said that schools allow students to identify as animals and demand litter boxes in classrooms. Michigan Republican Party Co-Chair Meshawn Maddock also repeated the lie, as did Heidi Ganahl, the Republican candidate for governor of Colorado. She claimed that student “furries” are identifying as cats in over 30 different schools in the state.

Rep. Lauren Boebert (R-CO) has claimed that a father in Michigan told her that his son got into trouble when he stepped on the tail of a student who identified as a furry.

Reuters published a fact check in July that said there is “no evidence of them disrupting classrooms or schools developing a policy of including them as a formal identity.”

Earlier this month, conservative radio host Joe Rogan told former Rep. Tulsi Gabbard (D-HI) that he knows someone who knows someone who said that “there’s a girl who’s a furry, who identifies as an animal and her mother badgered the school until they agreed to put a litter box in one of the stalls.”

“So this girl goes into the litter room or to the girl’s room and urinates or whatever — I don’t know if she poops in it, that’s pretty gross.”