I am posting this for the people who claim being gay is not “natural” and against the way god meant the plumbing to work.   Homosexual acts and couplings can be found in almost all animal species.  There is another gay penguin couple that has raised chicks successfully, I read of one gay bird couple that adopted a chick abandoned by the straight birth parents protecting and raising the chick to adulthood as a family.   So either their god lied to these people, or these people are hiding behind their god to push their bigotry.    Hugs 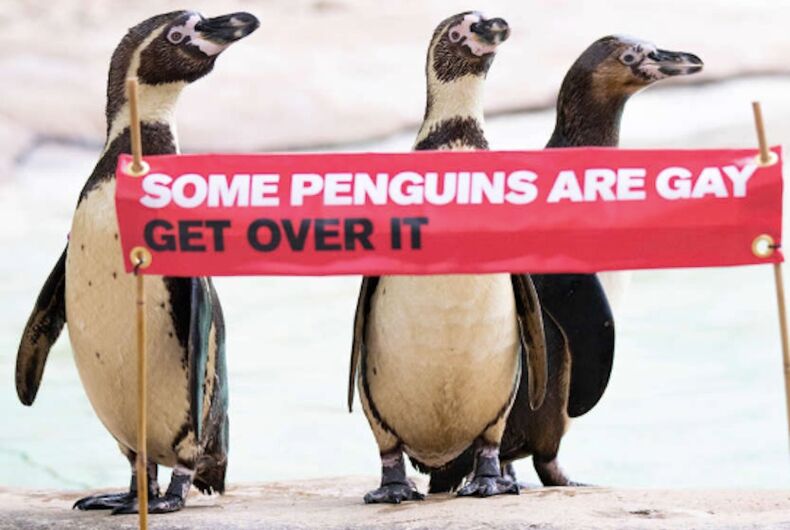 A same-sex pair of penguins has reunited for mating season at the Sea Life Melbourne Aquarium in Australia.

According to penguin keeper Emily Thornton, two of the aquarium’s male Gentoo penguins Klaus and Jones have been building nests together for about three or four years now.

“Initially, they started building their nest in the wrong area as such, but this year, for the first time they’ve actually put it in the nesting platform area, which is really exciting. They are a couple that we’re hoping one day might actually be foster parents,” Thornton explains.

“Although same-sex male pairs are unable to fertilize and lay an egg between themselves, Klaus and Jones can be given a ‘dummy egg’ to protect during the nesting period and practice being dads,” says Thornton.

Same-sex penguin couples have paired off in zoos all over the world. “Penguins conduct homosexual relationships that can last a whole lifetime,” biologist Guenter Strauss explained in 2019 when the Munich Zoo highlighted a male couple of Humboldt penguins during Pride Month.

Roy and Silo, a homosexual chinstrap penguin couple at New York’s Central Park Zoo, even inspired the children’s book And Tango Makes Three after they successfully hatched an egg given to them by zookeepers.

Same-sex penguin couples frequently foster eggs and chicks, sometimes stealing eggs and whole nests from heterosexual couples. One pair of male Magellanic penguins has even been dubbed the San Francisco Zoo’s star parents. In 2019, Oceanworld Aquarium Dingle in Ireland reported that most of its penguins had paired off into same-sex couples.