Do you see the new talking point at levels?  Children!  Protect the children, children make a marriage, indoctrinate the children with conservative dogma.   Why are they focused on children when not all straight couples can produce children?  Well I think in the Old Testament barren people cannot enter the temples.    Plus that is how they are pushing the anti-gay / trans bills.   Think of the children.  It is how they get people to accept not following best medical practices is by invoking the children and the idea that kids don’t know their gender or sexual orientation until they are adults.   Plus they managed to swing the abortion debate to their arguments based on the idea that it was murder of children, even though we all know a fetus is not a human child.  They get people to ignore the pregnant person by claiming that it is a child, don’t you love the innocent child.   Mean sexual woman wants to put her needs over the needs of a child.   Boo, Boo, bad woman.  That is why the right is focused and using the children.   “Give me a child until he is 7 and I will show you the man.”  philosopher Aristotle 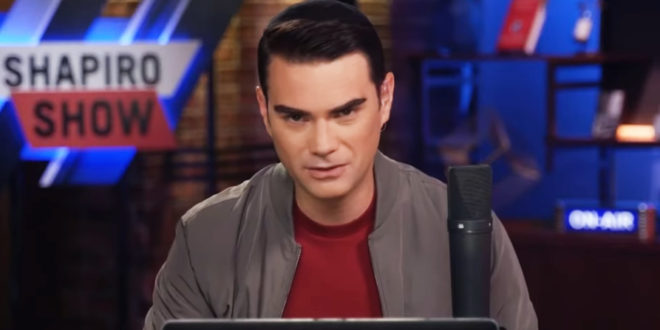 “You shouldn’t, okay? The reason I say this is not because I wish to shrink the size of the Republican party — because if the fundamental basis of human society is male, female child and you think that by passing a law you can change to that reality, you do not belong in government.

“It’s a very simple proposition. Men and men are not the same as a man and a woman who are capable of becoming one flesh and producing a child.

“This is not difficult stuff. Many Republicans will be tempted to vote for this simply to avoid the conflict. So that people don’t yell at them. ‘Oh my gosh, you’re not respecting! Love is love! The love is love argument was always bull crap.” – Ben Shapiro, on today’s podcast.

Ben Shapiro tells any Republican senator voting for the codification of same-sex marriage: "You should not be in the Republican Party" pic.twitter.com/qmM4JJk4rJ

Based on that logic I guess he’s also against allowing men with low sperm counts or post menopausal women getting married, then?

Not every male/female marriage produces children. Many gay marriages do have children whether by adoption, surrogate or previous relationships. Many babies are produced with no marriage at all. This man has his head way up his a$$.

If you believe post-menopausal women should be allowed to get married, you do not belong in the Republican Party.

It’s not that we hate post-menopausal women. We just recognize that they are no longer capable of serving their function as incubators for Young Republicans™, and are therefore not as deserving of rights as fertile women, let alone men, particularly impressive specimens of masculinity like me, Ben Shapiro.

He’s just pissed off because a major part of his and many others’ grift operation is about to go away. So he’s doing what a good little conservative does, he’s crying like a little baby.

No, but we can f**king adopt. And with the state of the foster care system, you should be applauding those gay couples that adopt these children. You have no shame.

BTW, hubs & I were looking into that and it costs at least $35,000 per child.
Then there are some agencies that refuse to let same sex couples adopt.

Well, we do have the ability to invoke earthquakes, we control the weather, and we’re totally capable of defying Biblegod’s every edict merely by thinking about it. We’re that powerful.

Of course, gay people can create children just fine. They are just less likely to do it on accident.

The] government thinks that straight couples tend to be sexually irresponsible, producing unwanted children by the carload, and so must be pressured (in the form of government encouragement of marriage through a combination of sticks and carrots) to marry, but that gay couples, unable as they are to produce children wanted or unwanted, are model parents—model citizens really—so have no need for marriage.

Imagine having so little to do in your own life that you have to try to control what other people do with theirs.

No, Ben, despite all of your efforts for the last several thousand years to erase gay people at best, or to eradicate gay people at worse, you have continually failed because you continue to spout the nonsense you just did. Male and female making a child is not the only basis of society. But it just bothers you no end that other people are important, too. I’m sure if you were Jewish you would understand that your logic is exactly the same in Christinity that reached its culmination about 100 years ago.

He is Jewish. IIRC.

Of course he is. That was sarcasm.

2 thoughts on “Shapiro: Republicans Who Vote For Marriage Bill Don’t Belong In The Party Because Gays Can’t Create Children -JMG”