This story has a good ending even though it starts with bigotry.   For those that claim they shouldn’t have used a Catholic cemetery the surviving spouse asked if it would be a problem and was told no it was acceptable and fine, it would be no problem.   First the cemetery tried to ignore and avoid the spouse after they defaced his memorial stone.   But a law suit where they were looking at having to pay a big damage award brought them right around to not only apologizing to offering to replace the stone with the wording the spouse wishes. 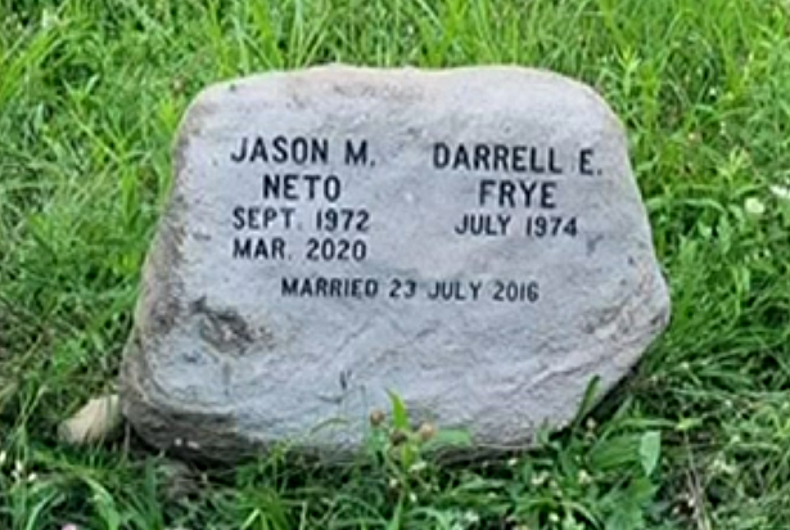 The headstone, before it was changed Photo: Screenshot

Darrell Frye of Dayton, Ohio is speaking out after he says a Christian cemetery “purposefully” removed the date of their marriage from his late husband’s headstone, which originally had both of their names and the date they were married.

“Somebody just decided that that doesn’t count,” Frye said about his marriage with Jason Neto, who passed away in 2020.

Frye and Neto met in 2006 and got married in 2016, about a year after marriage equality was legalized in Ohio.

In 2020, tragedy struck when Neto died of a heart attack. Frye purchased a plot in the Catholic Calvary Cemetery because Neto was raised Catholic.

“I chose the St. Kateri preserve because that was very much in the spirit of what Jason was as a person,” he told WHIO. “I knew this was a Catholic cemetery, and I point-blank asked, ‘Is this going to be a problem that we’re a gay couple and buying a plot here?’”

He said that he was told that it wasn’t a problem, so he bought an engraved memorial boulder to honor Neto. He decided to “keep it simple” when deciding what to write on the boulder because of a 30-character limit, and he chose to include the line “Married 23 July 2016.”

The boulder was installed a year later and it said what it was supposed to at first. But then Frye went to visit the plot in mid-October and he didn’t see the boulder.

“I came out here and it was gone, just gone,” he said.

He went to ask Cavalry Cemetery about what happened and he was told that it was taken in for maintenance. But when it was brought back, the text had been altered.

“The line about our marriage was just erased. They dug into rock to erase our relationship.”

Frye tried to talk to the cemetery staff about it, but he couldn’t get ahold of anyone. So he hired a lawyer and now he’s coming forward with his story.

WHIO tried contacting Cavalry Cemetery by email, phone, and with a visit to their office, and they finally got a statement: “In consideration of the family we will communicate directly with them, and release a statement at the appropriate time.”

Frye said that he met with them in early November.

“I have met with the leadership team at Calvary,” he said on November 3. “They have offered a full and unconditional apology for their mistake and expressed a sincere interest in making amends and in restoring the memorial boulder to its original state or an acceptable equivalent.”

Cavalry then told WHIO that Frye’s statement was “accurate and much appreciated.”

“We will be working with the engraver to restore the memorial immediately,” they said.