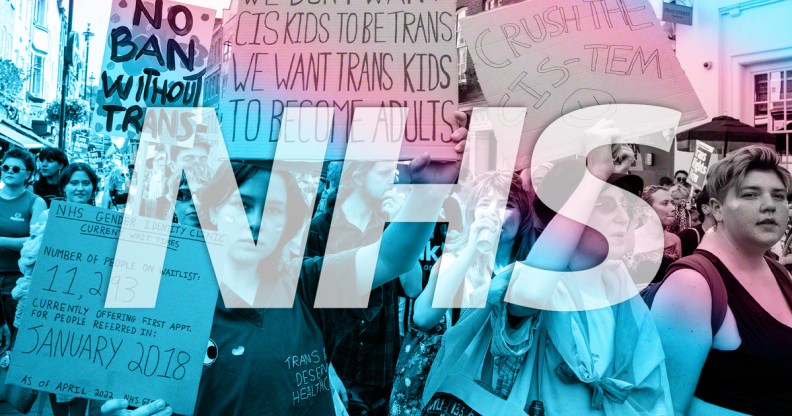 The NHS is consulting on a new service specification for trans youth healthcare. (Getty)

Although the LGBTQ+ community welcomes plans to expand services, recently released proposals have introduced gatekeeping measures that could make gender identity services harder to access for many young people, and which have been compared to conversion practices. The service seems to have been designed to reduce the number of young people transitioning as much as possible.

A consultation on the proposals is now open. There’s still time to make a difference by responding to the consultation before it closes on Sunday (4 December).

The Trans Learning Partnership together with Gendered Intelligence has produced an explanation of how we got here – and how you can help the trans community today.

How did we get here?

As pressure from the media and the government has fuelled anti-trans movements over the last few years, access to transition-related healthcare for children and adolescents has become a battleground.

Misinformation and fearmongering about gender identity services is rife, with the mainstream press claiming that gender-affirming care is too quick or too easy, or that young people have instant access to puberty delaying treatments and hormone therapies.

This is a fantasy. It takes at least three years to get a first appointment at GIDS, and many more to receive further care. Young people who enter the services in their teens age out without a single appointment and are thrown straight back on a waiting list – for how long, no one knows. The reality is that gender identity services in the UK, particularly for young people, have been in freefall for years.

After GIDS came under fire for inadequate care, the NHS commissioned the Cass review. This independent review led by Dr Hilary Cass published an interim report in February 2022, which found a number of challenges to GIDS’ ability to deliver good care.

The NHS has since decided to close GIDS and replace it with two new regional hubs. In theory, these regional hubs should allow for more patients to be seen, and to be seen closer to home.

However, the proposals as written could end up hurting hundreds of trans children and their families.

What are the proposals?

There are a number of changes that the NHS is proposing. Some of these could be positive. For instance, expanding the teams that work with children and young people and improving integration with local services could provide more extensive support for service users.

But many of the changes point towards gatekeeping. The list of professionals who can make referrals to the service is being cut down. New referrals will require an assessment just to be put on the waiting list, extending wait times even further.

The proposals even go so far as to encourage doctors to intervene in social transition.

Under the new service, doctors could discourage prepubescent children from socially transitioning, or restrict adolescents from transition unless they meet certain criteria.

Social transition is not a medical intervention; it involves the social expression of gender such as changing name, pronouns, haircuts, and clothing choices, making intervention by doctors absurd and unenforceable in practice. Are doctors expected to police the clothing, haircuts, and behaviour of their young patients?

Restricting social transition could arguably amount to a form of conversion practices.

While the UK government continues to delay bringing forward a ban on conversion practices, over 25 health, counselling, and psychotherapy organisations have created a Memorandum of Understanding on Conversion Therapy, providing a definition of conversion practices in the UK.

This definition recognises that conversion practices are “any model… [which] seeks to suppress an individual’s expression of sexual orientation or gender identity” on the basis that one orientation or identity is preferable to others.

Restricting social transition would be tantamount to suppressing an individual’s gender identity and expression, and suggesting that a cisgender identity is preferable.

Under the proposals, puberty blockers will only be accessible via the NHS with mandatory enrolment onto long-term research programmes. This would require children and young people to be part of a clinical trial to access essential care that is clinically indicated for them (and is not in line with ethical standards for healthcare research).

There are also serious concerns for those who access puberty blockers or hormones from sources other than the NHS. The proposals state that anyone accessing the service who is using medications “from unregulated sources or from on-line providers that are not regulated by UK regulatory bodies” will be discouraged from doing so, the NHS will not enter into any shared care agreements, and “will advise the GP to initiate local safeguarding protocols”.

The NHS has a duty to reduce avoidable harm. Like many medications, taking unmanaged puberty delaying or hormonal drugs can be unsafe, and regular blood tests are needed to monitor health and adjust doses as needed. In refusing to do this, the NHS is putting children and young people at risk of avoidable harm, when instead they could ensure that these children and young people are being properly prescribed and monitored.

In fact, if the NHS refuses to take over a young person’s care, and at the same time advises them to stop taking medications, they could forcibly detransition vulnerable young people, causing serious psychological harm and leaving them without medical support.

The proposals conflate three sources that they imply are all dangerous to receive medications from: unregulated sources online such as pharmacies and distributors, private practitioners and overseas care are all treated as “unregulated”. These range so much that they cannot reasonably all be treated as unsafe. In fact, gender specialists working in NHS clinics often have their own private practices too.

Threatening desperate families with unnecessary interventions from social services, just for supporting their own children, is not going to make anyone safe. No explanation has been given for these safeguarding concerns.

Not only does this punish families for turning to alternative services to meet their children’s needs, it also risks an influx of unnecessary safeguarding reports that will overwhelm the already-stretched social care sector. This will take time away from families who are in genuine need of support.

We aren’t alone in these worries. This weekend, the Professional Association for Transgender Health (WPATH) released a damning statement, highlighting that in their advised approach – which the NHS is not taking – the benefits outweigh the risks, “when transgender and cisgender people are correctly regarded as equal”. It is clear from this statement that the NHS commissioners are travelling in the opposite direction to the global best practice on trans healthcare.

Click here to read Gendered Intelligence’s full guide to the NHS consultation and to find more about how you can respond.