This is what the right wing media is pushing constantly and what the religious right people are hearing.   They believe it, they refuse to look at any other media or ideas that don’t agree with the worst possible thing that can be said about the LGBTQI+.   The parents watching / reading this right wing media then share it with their kids.   The parents go to school board meetings and scream their hate, the right wing board members attack gay and trans kids making their school years horrible and scary.  The right wing parents tell their kids to tell them if any teacher says anything positive about gays or stop their kids from spewing hate and bigotry.  The right wing kids attack the gay and trans kids, if the teachers stops them the kids report that to their parents or if the teacher puts a same sex family picture up the kids report that to the parents that sue claiming their right wing family rights to persecute and oppress are being denied.    My heart hurts over this situation.   Hugs 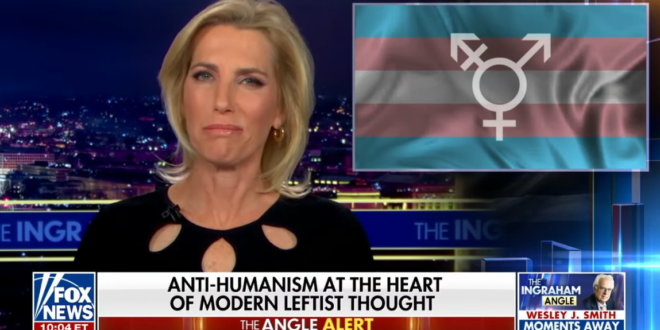 “Crusaders for climate change, abortion, euthanasia, gender fluidity, they all lead — eventually, their thinking — to the devaluing of human life.

“At its core, being anti-human means being anti- truth because it involves the questioning or denying of objective facts, including those at the very heart of our existence.

“The cult of gender deviancy collapses into meaningless slogans and blather. None of it makes any sense, but it’s deeply anti-human.” – Laura Ingraham, last night.

Like those trans people at Dartmouth in the 1980s who took photos of students going into gay students’ alliance meetings and then outed them in the college magazine, leading one of them to attempt suicide.
Oh wait, that was you, you fucking nazi sow.

Right wing dehumanizes queer people by enacting laws to ban books and discussion about their history.
Also right wing: the left dehumanizes everything!

Fascinating, considering that perspective is coming from people who flatly refuse to even attempt to understand the science and objective facts which explain, clearly, that gender is not binary and lots of variations of gender and sex appear naturally and always have.

One thought on “Laura Ingraham: Trans People Are “Deeply Anti-Human””