Republicans are sure there is massive voter fraud and the reason appears to be they are the ones doing it.    Hugs 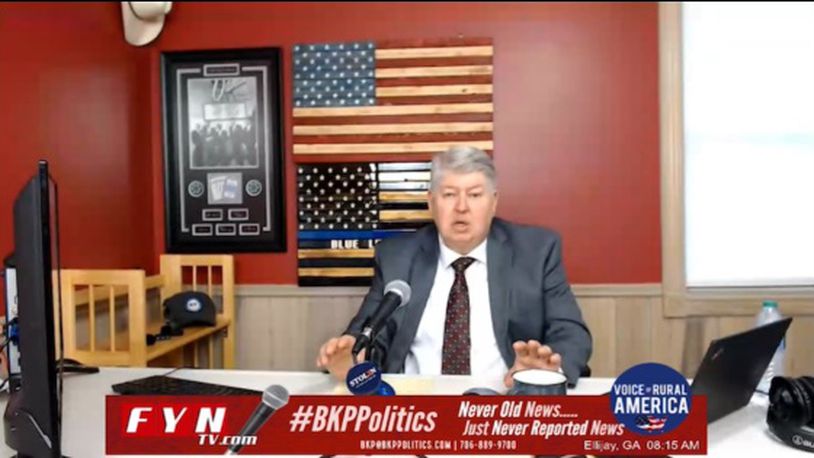 The Georgia attorney general’s office wrote Thursday that Pritchard broke state law each time he voted before his sentence was completed, according to a filing with the Office of State Administrative Hearings. State law prohibits felons from voting.

Pritchard, the head of FetchYourNews.com, qualified Monday to run in a special election for the state House seat previously held by Speaker David Ralston, who died last month. He will face Ralston’s widow, Sheree Ralston. Both candidates are Republicans from the Blue Ridge area in northeast Georgia.

“I’ve not done anything wrong here,” Pritchard said Monday, asserting that his sentence ended long ago and his rights had been restored. “I guess if you’re apprehending public enemy No. 1, here I am.”

Ralston, the executive director of the Fannin County Development Authority, said she is running to continue her husband’s work, especially to expand mental health care and addiction treatment programs.

“Sheree Ralston brings dignity and integrity to this campaign and would serve her constituents with the utmost honesty and respect,” campaign spokeswoman Jen Talaber Ryan said.

Pritchard pleaded guilty in 1996 to three felonies, including two counts of forgery and one count of theft by failure to make a required disposition of funds, according to court records from Allegheny County, Pennsylvania.

His sentence included probation and restitution payments of over $33,000. Court documents available online don’t provide details of the underlying crimes.

After Pritchard registered to vote in Georgia in 2008, he voted in nine elections before his felony probation sentence ended in 2011, according to the attorney general’s office.

Pritchard has said on his show that the 2020 presidential election was “stolen,” though recounts, court cases and investigations have repeatedly debunked those claims. He has criticized Republican Gov. Brian Kemp and Republican Attorney General Chris Carr for being “complicit” in Democrat Joe Biden’s victory in Georgia.

“I do not believe that 81 million people voted for this guy,” Pritchard said on his show in April. “This is what they did to us, America.”

Pritchard’s attorney told the State Election Board last year that he was unaware he was considered a felon when he registered and voted in Georgia. The board referred the case to the attorney general’s office for further proceedings.

“The system is not set up for people to do whatever they want and us to catch them. It’s for people to abide by the law,” State Election Board member Matt Mashburn said during the February 2021 meeting.

The attorney general’s office has requested a hearing before an administrative judge in Fannin County, where Pritchard lives, during the week of Jan. 9, after the special election for House District 7 on Jan. 3.

Pritchard could face maximum fines of up to $5,000 for each violation.

Unless Pritchard were convicted of a felony for voting while serving his sentence, he wouldn’t be disqualified from office. Local prosecutors haven’t sought criminal charges against Pritchard.

If he were a Black woman, he’d be sentenced to five years in jail, at least.

Crystal Mason got 5 years in jail for doing it accidentally. Why shouldn’t this asshole get a LOT more?

There’s only one white answer.

Because he’s white. And Republican.

Uh, cause he’s white, straight, and a Republican. Obviously.

He will probably get a serious finger wagging from the judge and given a small fine. That’s the way our crazy world works today.

Every accusation is a confession. Every single goddamn time

Inbred Goober serves time for felony, commits more felonies then runs for office. This could be a recurring reality show on TLC. Candice what’s her name could be the love interest of all of them. Praise Jesus!

Now I understand why the GOP is so fixated on election tampering because they are doing it in plain sight.

And they assume “everybody” does it. So why not?

Every accusation is a confession.

Will he be charged with anything? No mention of charges anywhere. He ought to be sentenced to 9 x 5 years in jail for this, right?

No, but if he was a liberal, RW media would be screaming for his arrest.