The world it is a’ changing.   This is what programs of acceptance and tolerance produce, a better world for everyone.   This is what positive representation does, it shows the LGBTQI+ are not monsters and helps people understand that they know people who are LGBTQI+, maybe even a family member.   This is why the haters want to take LGBTQI+ books out of schools and libraries, why these haters want the don’t say gay laws.   They want to stop the spread of acceptance that comes with people knowing, seeing, and understanding gay, lesbian, trans and the rest of the LGBTQI+ community.    Hugs 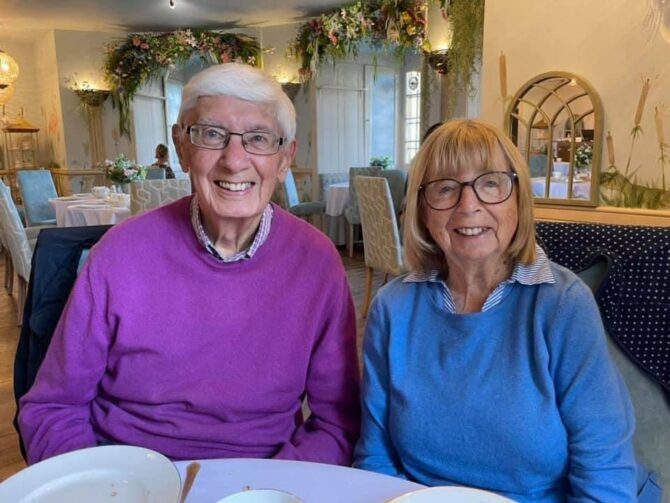 A man has shared the message he received from his grandparents after they found out, via a newspaper story, that he’s gay.

Simon Crowther, 28, is a British civil engineer who specializes in water and flooding. The Nottingham-based entrepreneur founded his own company, Flood Protection Solutions, while still at university in 2012. In 2018 he was featured in a ‘Forbes Under 30’ feature of entrepreneurs to watch. The latest issue of gay magazine Attitude highlighted Crowther as a rising name in the LGBTQ engineering and tech world.

Crowther was out to most people in his life, including immediate family, but not his grandparents. However, his inclusion in Attitude list of 101 trailblazers was picked up by a local newspaper in his hometown of Nottingham, which ran a story about Crowther’s achievements.

Crowther’s uncle commented about the article to his grandparents, Jill and Bill, prompting this adorable message from them.

“Hello Simon, We learned from John R when he came round with Grandpa’s birthday present, that there was an excellent article recently, about you and how you built your business, in a Nottingham Evening Post Magazine.

“Apparently, you reported that you had ‘Come Out’ as being gay to your family when you were 21. Obviously, it was decided to keep it from us for if it upset us. Don’t worry, we are not upset.

“In fact, I had already worked it out for myself (Gran), but Grandpa didn’t know. Don’t worry. You are still the same Simon to us this news alters nothing. We want you to know that you are still our grandson and we love you just the same.

“We have not mentioned this to Mum or Jenny, so this message will be as big a surprise to them when you tell them, as it will be to you. I am so glad we now know. Enjoy your life.

“You are making a pretty good job of it up to now. And…..we would still love to see the article mentioned above. Can you e-mail it to us? With all our love and support,

Crowther shared the message to Twitter, adding the caption, “My 89 year old grandparents win the award for most adorable email ever 🥰🥰🥰 Feeling blessed”

My 89 year old grandparents win the award for most adorable email ever 🥰🥰🥰
Feeling blessed pic.twitter.com/aM6yNPIuTk

At the time of writing, the tweet has had over 44k likes and hundreds of comments. Here are just a few of the replies.

I've not come out to my grandparents. I was too scared that it would ruin our relationship because I can't tell where they stand on those topics.

I missed my chance to tell both my grandads, but I'm still too nervous to tell my Nan 😔

2/2 to knoabout gay people in 1940s onwards etc. he just shrugged and said “he was a nice man” no judgment, no assumptions,” my dad was amazing and the kindest non judgemental man I ever met. This story is about you but I wanted to share a little of my dad x hope you don’t mind.

And this is why we need to push back on the “excuse old people for bigotry” line. They don’t need to be. The world is better when they’re actually good people, no matter how old.

That’s just wonderful! People misjudge how older people will react to things. My Mum spent her last 2 years in a care home. One of her favourite carers was a gay man. He once showed Mum a pic of new partner. Mum’s reaction? “He’s far too old for you, you need a younger man” 🤷‍♀️

I remember my Irish gran calling me when the vote for same sex marriage was taken in Ireland. "Ye have won the vote" she said. I asked if she had voted, and got "of course I fekkin voted for it, why wouldn't I".
She is now 90 years old and going strong.

😂 love that you picked up on that. She always does

Aww. I can just see them by the computer deliberating over what to say. They’re adorable pic.twitter.com/AdKbRjCgMa