Two sides swiftly emerged at Wednesday’s Congressional hearing on anti-LGBTQ+ violence: one that was ready to talk about our community’s rights and protections, and another that just wanted to blame the woke left.

The special hearing on “The Rise of Anti-LGBTQI+ Extremism and Violence in the United States” was assembled in direct response to the Club Q shooting in Colorado Springs by a far-right extremist which left five dead. But while the witnesses and Democrats discussed the issue at hand, which outgoing committee chair Carolyn Maloney called “one of the most pressing issues that our nation will face in the years to come,” Republicans focused their efforts on turning anti-LGBTQ+ hate crimes into just a symptom of an alleged wave of violent crime, blaming everything from Black Lives Matter and efforts to defund the police to poor border security and fentanyl.

Witnesses at the hearing included Michael Anderson and James Slaugh, two Club Q survivors; Club Q owner Matthew Haynes; and Brandon Wolf, a survivor of the PULSE shooting, all of whom gave impassioned testimony about their experiences, trauma, and hope for the future. “Hate speech turns into hate action, and actions based on hate almost took my life from me at 25 years old,” Anderson told the committee. Wolf echoed the sentiment, calling out “cynical politicians and greedy grifters” like Florida Gov. Ron DeSantis who willfully “pour gasoline on anti-LGBTQ hysteria” to make money and accumulate political capital.

Haynes, who said attending the signing of the Respect for Marriage Act on Tuesday was “the first joy and pride I have felt since these horrific events at Club Q,” bluntly shared with the committee several examples of anti-LGBTQ+ hate speech he’d received since the shooting. The messages were filled with slurs, professing happiness that five people were dead and disappointment the killer hadn’t shot more.

“I ask you today not simply what are you doing to safeguard LGBTQ Americans,” Haynes said, “but rather what are you and other leaders doing to make America unsafe for LGBTQ people.”

Witnesses also included Human Rights Campaign president Kelly Robinson, who called hate-motivated violence like the Club Q shooting “the tragic result of a society that devalues our lives, particularly the lives of Black and brown transgender and gender-nonconforming people.” Most of the witnesses stressed that Republicans’ fearmongering and misinformation around trans people and drag performers in particular directly emboldened open violence on hospitals, libraries, and on the street.

Lehman’s testimony was an obvious overture to what Republicans really wanted to talk about, the same talking point they’d stressed throughout this year’s midterm campaigns: that violent crime is allegedly on the rise, and it’s actually the Democrats’ fault any of this happened. Kentucky Rep. James Comer, the incoming committee chair who literally opened his remarks with the phrase “thoughts and prayers,” squarely blamed left-wing “defund the police and soft-on-crime policies” for a general rise in violence he denied is unique to LGBTQ+ communities.

“We should be focused on the alarming rise of violent crime across our country, crimes that target all races and ethnicities,” Comer said, citing elevated homicide numbers in several large cities. Recent analyses from both the Bureau of Justice Statistics and FBI show that while homicide rates have increased during the pandemic, there was no national increase in overall violent crime over the last three years.

Comer, of course, has a motive for obfuscating culpability: he’s one co-sponsor of Marjorie Taylor Greene’s “Protect Children’s Innocence” bill, currently in committee, which would make providing a minor with any gender-affirming care a felony and prohibit federal funds from paying for such care. 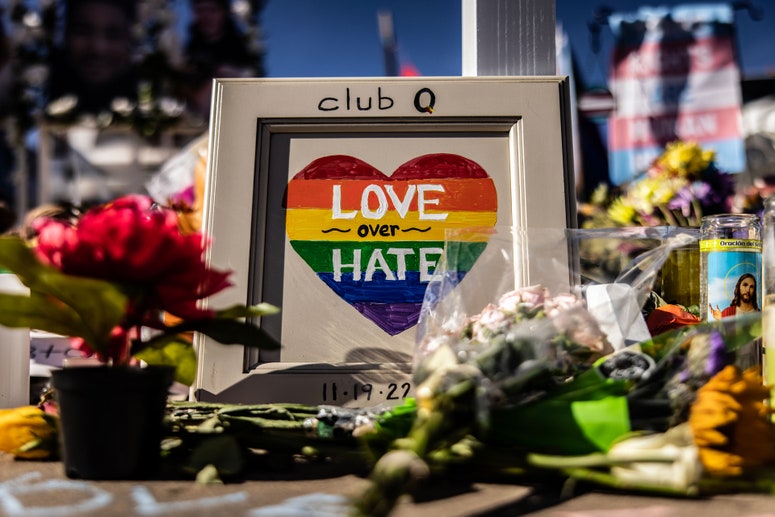 At Stonewall, Club Q’s Co-Founder and Staff Gather to Envision the Path Ahead
On Friday, Club Q family and supporters fundraised to reopen the nightlife haven at the center of the Colorado Springs shooting.

Other Republicans followed suit, like Pennsylvania Rep. Fred Keller, who said the committee should be “looking at this holistically as an American crime crisis.” Jody Hice of Georgia, in his last committee meeting as a representative, equated anti-LGBTQ+ hate speech to Maxine Waters’ 2018 comments encouraging people to make then-current Trump administration officials “not welcome anymore, anywhere.” Pat Fallon of Texas, aggressively questioning Wolf, invited comparison to James Hodgkinson, a Bernie Sanders supporter who shot Republican Rep. Steve Scalise and four others in 2017. “None of us blamed Bernie Sanders because he didn’t do it,” Fallon told Wolf, clearly agitated. In fact, some Republicans including then-President Trump did blame Sanders and other Democrats for allegedly inciting the shooting.

David Cicilline, co-chair of the House Equality Caucus, said he was “disappointed, but not surprised” that almost no Republicans asked the witnesses about anti-LGBTQ+ extremism. “Republicans are happy to discuss our community when they’re attacking our rights, when they’re crying on the House floor because they oppose marriage equality,” Cicilline pointed out during the hearing. “But when it comes to actually discussing the violence against our community and its causes, just a quick condemnation of what happened at Club Q, and violence broadly, and nothing more.

“In my view, this is shameful,” Cicilline added.