Florida rejected a proposed Advanced Placement course focused on African American Studies because it included study of topics like the Movement for Black Lives, Black feminism and reparations, according to a list of concerns provided to CNN on Friday by Republican Gov. Ron DeSantis’ office.

The state also said the course framework for the study of reparations – the argument to compensate Black Americans for slavery and other historical atrocities and oppressive acts – includes “no critical perspective or balancing opinion in this lesson.”

The state Department of Education on January 12 informed the College Board, the organization that oversees the Advanced Placement program, that the course violated state law and rejected its inclusion in Florida schools.

Florida Gov. Ron DeSantis' administration has concerns with six topics of study on the syllabus for the new AP African American Studies class, according to a list provided to CNN, including the study of the Movement for Black Lives and reparations,https://t.co/Nbhi350j3W

Interpreted: you can’t teach about racism unless you teach that racism could be fine.

I wrote up an acceptable black history curriculum for Florida:

– Once upon a time, there was a kind of embarrassing practice where some people were forced to do jobs — even though it wasn’t as bad as some people like to say. And the same thing existed in Africa too, so it wasn’t the Americans’ fault.

– All of the divinely-inspired Founding Fathers wanted to end it.

– Eventually, the North invaded the South, and the South fought back valiantly. But the North overwhelmed it by throwing overwhelming, sacrificed bodies of soldiers at the brave defenders — who only wanted to be able to have their own laws and culture without woke, federal interference.

– Then the North told all those workers they didn’t have jobs anymore.

-The North tried to make those people serve in government for about 10 years, but everyone agreed that it was a disaster, and things went back to normal.

– Those people liked to call themselves “colored.” Some of them had some good qualities like Harriet Tubman and Frederick Douglass, who were both Republicans and loved guns. They opposed the Ku Klux Klan, which was created by the Democrat Party.

– Eventually, there was a guy named George Washington Carver. He invented peanut butter. He was also a Republican.

– Not much happened for a long time. Eventually there was the great Martin Luther King, Jr. He was a Republican too. He taught everyone that it is wrong to talk, or even think, about skin color.

– Then Obama became president and brought Democrat racism back. 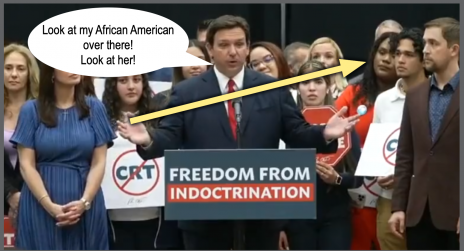 When your political base is old, low info white people…

Even his hand gestures are Trumpian…

They don’t look all that old in the pictures. Don’t blame old people, blame racists.

If you’re talking about the pic at the top of the thread, a bunch of those are minors who have been GROOMED.

It isn’t African American Studies if it includes balancing perspectives from the Klan.

DeSantis with a sign that says Freedom from Indoctrination? That’s some Orwellian shit right there.

‘The course neglects to mention that in the Civil War there were very fine people on both sides.’

So tell me, what’s the ‘balancing opinion’ on slavery?
Maybe, “it wasn’t all bad”?

Or ‘there were some good Nazis’.
The drift towards revisionist history must be crushed.

Neo-Confederates in the US have been pushing their bizarre ,revisionist history of the Civil War and slavery for as long as I can remember.. This is the first tine a state government has turned those lies into an official state sanctioned history..

The thing is, every revisionist lie about slavery, and the cause of the Civil War they tell is contradicted by contemporary documents from the Civil War: the articles of session by the various states, the constitution of the Confederacy, the Congressional record of the Confederacy, public speeches by confederates, such as the infamous Cornerstone Speech.

(2) I wonder how long it will be before they decide to give Holocaust-deniers “equal time.”

If the media examined what happened in the Nazi murder camps using the “both sides” approach they’ve adopted today, they wouldn’t denounce the Holocaust as evil. They’d tell us what happened and then insist on getting the Nazis’ “point of view.”

This story just hit it home to me how really frightening floriduh & the US is becoming.

There is NOTHING in education, especially higher education, that students should not be exposed to so they have a good knowledge of WHAT IT IS. That is what education is about, for Christ’s sake, not keeping people in ignorance! Any student of history, certainly of U.S. history, should know what the Black Panther Party was. Any high school student should be familiar with what it was, should know what Marxist-Leninism is! And why should they not be made familiar with contributions made to society by gay people in the Black community?!

All the other AP classes that addressed different ethnic and cultural aspects were allowed to continue however.

If we can’t learn it…
Then did it ever exist?

Florida is southern/rebel state. The south hasn’t changed at the government level.

Doesn’t seem to have changed much st the ordinary people/voters level.

This is worth your time to read.

THE CASE FOR REPARATIONS

Two hundred fifty years of slavery. Ninety years of Jim Crow. Sixty years of separate but equal. Thirty-five years of racist housing policy. Until we reckon with our compounding moral debts, America will never be whole.
By Ta-Nehisi Coates

Once again, a fuck you to anyone in FL who screams about how horrible socialism is while you cheer shit like this.

I am just embarrassed this is happening in 2023. Beyond. Sickened, too.

I went to university at one of NYC’s city colleges and it was possible to major in religion. In fact it is possible to major in religion at many public universities. I probably disagree with much of what is taught in thise departments, but I would never approve of the state banning the classes. Which is just another example of how the right wing engages in cancel culture and stifling free speech. Yet the media would have us believe the left engages in it.

People who go to religious seminaries often emerge questioning their former religious beliefs and even becoming atheists. Not necessarily a bad thing.

One thought on “FL Defends Ban On African-American History Course”