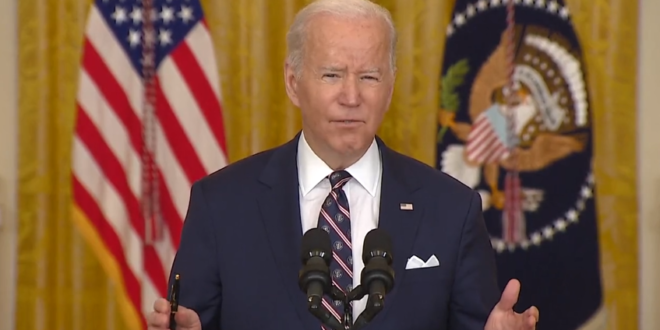 President Biden announced new sanctions on Russia on Tuesday after its moves against Ukraine, saying the actions amounted to a “flagrant violation of international law.”

In imposing economic penalties on Russia, the United States joins European allies in responding to Russia’s deployment of troops into two pro-Russian separatist regions of eastern Ukraine. Biden called Russia’s actions the “the beginning of a Russian invasion of Ukraine.”

“That means we’ve cut off Russia’s government from Western finance,” he said. “It can no longer raise money from the West and cannot trade in its new debt on our markets or European markets either.”

He also said that the United States would impose sanctions on Russian elites and their families, an effort to ensure that those closest to Mr. Putin do not escape financial pain that is expected to hit hard for average Russian citizens.

I am impressed.   These are not small steps or weak words.   Biden stood strong and firm and warned the country that defending democracy is going to come at a cost and it is going to hurt in some ways.   I don’t think Russia / Putin expected this.   I don’t think he thought the gas pipeline was threatened.   These sanction will hurt the oligarchs which will threaten Putin’s hold on the country.