On Wednesday, LGBTQ+ advocacy and crisis support organization The Trevor Project released its latest research into the mental health of queer youth, a survey of 34,000 young people ages 13-24. The report is a revealing portrait of how LGBTQ+ youth are dealing with legislative attacks and the COVID-19 pandemic, as well as a road map for how to best support them.

One key finding in the survey — as has been noted in almost every other study of its kind, including last year’s survey — is the power of family and community affirmation to positively influence mental health. According to the report, only 6% of LGBTQ+ youth who “felt high social support from their family” had attempted suicide in the past year, less than half the rate of those who felt they had “low to moderate” family support. The same was true for communities in general; 21% of youth who described their community as “very unaccepting” had attempted suicide in the past year, compared with just 8% of youth who lived in “very accepting” communities.

The survey, which recruited participants via targeted social media ads, also highlighted the diversity and complex experiences of LGBTQ+ young people. 55% of survey respondents were White, compared to around 60% of the general U.S. population per the 2020 Census; 51% identified themselves as bi or pansexual, and 48% said they were transgender or nonbinary.

“Lumping diverse youth into broad identity categories and applying single-size approaches does a disservice to everyone, and makes our work to end LGBTQ youth suicide even harder,” said Dr. Myeshia Price, Senior Research Scientist for The Trevor Project, in a statement. “This year’s findings emphasize the importance of intersectionality in research, particularly among a community as diverse as LGBTQ youth, as disparities in mental health and suicide risk were found across race/ethnicity, sexual orientation, and gender identity.”

The survey also highlighted struggles that LGBTQ+ youth face in obtaining mental health care. Overall, of the factors preventing young people from obtaining the proper care, “fear of discussing mental health concerns” was the most common barrier, followed by “concerns with obtaining parent/caregiver permission,” the fear of not being taken seriously by providers, and affordability of care. 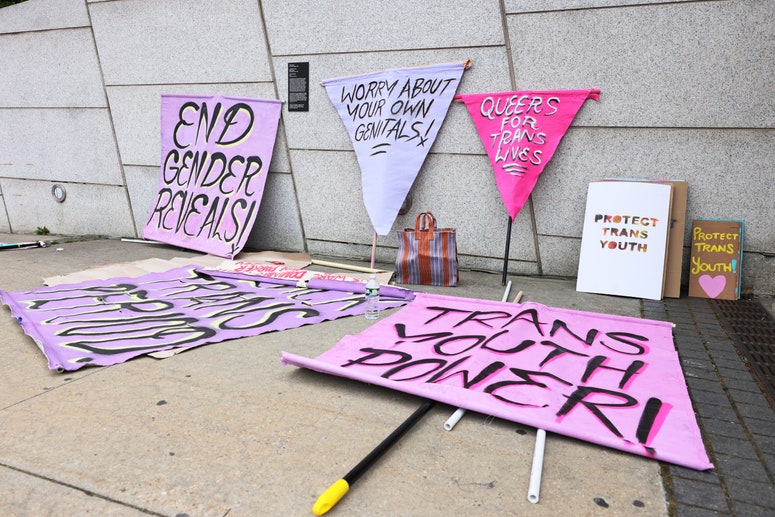 Crucially, however, the survey also includes data on how to best support LGBTQ+ young people, and things that bring them joy. Respondents reported feeling support from parents and caregivers who were welcoming to queer and trans peers, “talked with them respectfully” about their identity, and simply used their proper names and pronouns. “[T]hey also described hundreds of ways in which they find joy and strength in their lives,” the report notes, like attending drag shows, dance, video games, and “just knowing that there’s people out there like me.” That joy of community can come from close relationships and mass media alike; 89% of respondents said LGBTQ+ representation in TV shows and movies “made them feel good about being LGBTQ,” as did celebrities coming out and non-LGBTQ+ celebrities expressing allyship.

“We urge fellow researchers to include expansive identity terminology in all youth survey research, and for public health officials and youth-serving organizations to tailor services to meet LGBTQ youth’s unique needs,” said Dr. Price. “Only then will we be able to better understand and support the young people who need us most.”