This is for the viewers who enjoy the totally clueless religious grifters.  This woman went pushing religion on an elderly person who did not want it.   Yet rather than admit she was wrong to do that she claims the woman rejected her god because she has a demon in her.    Yes the only reason someone would reject being preached to about the Christian god is you are possessed by a demon.  Hugs

One of the comments hit the nail on the head with this: “Just more people who think this is the way they earn brownie points to get into heaven. They aren’t so much acting out of concern for others as they are out of fear for themselves because they can’t stand the thought that there might not actually be an afterlife”.    They are doing it for themselves to please their god, they don’t really care about other people.    Hugs 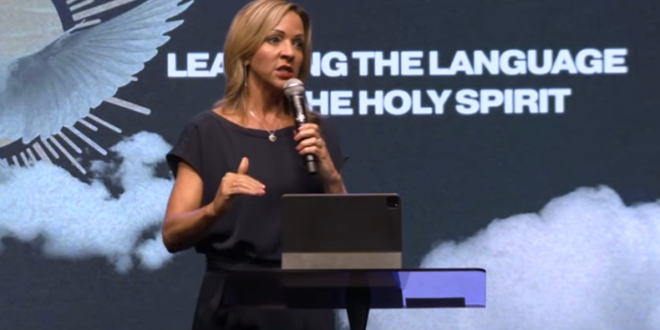 Televangelist and self-proclaimed prophet Jennifer Eivaz tried to “share Jesus” with an elderly woman living in an assisted living home and things didn’t go so well.

She writes for the far-right Charisma News:

I found her easily enough, as she typically sat facing a window in her wheelchair, always bent over in an arch and never fully able to straighten herself up.

I approached her as politely as I knew how and then shared with her about the love of Jesus and the power of His forgiveness. At the same time, I mistakenly believed she was ready to receive my words and did not anticipate what happened next.

Instead of her being receptive, almost instantly an ugly stream of blasphemies and curses spilled out her mouth. She continued to make abominably vile and foul statements about Jesus until I gave up and walked out of the facility in both shock and embarrassment.

What was going on here? This usually quiet, elderly woman was not crazy, as we are so apt to label people who behave how she behaved. She was demonized, meaning she was under the control and influence of a demonic spirit. This aged woman had a demon and that demon hated Jesus viciously.

That first paragraph . . . she goes around stalking people in nursing homes?

How is it that she gained access? We really need to protect the elderly from these groomers.

Many of these assisted living places are profoundly expensive, and typically insurance doesn’t cover it. A friend’s parents were in one here in Texas and they paid over $4,000 a month for the mother, just for a little apartment there, and they paid $11,000 a month for the father, who was in memory care with Parkinsons. These people were paying out of their own savings, so there’s money to be made for the Jeebus grifters.

My mother is in assisted living. She is paying about $9500 per month rent, plus about $2000 for medication management and personal care services. She does have long-term care insurance which reimburses about $9300 of that. But I am sure that many of her fellow residents are paying full freight, and (like Mom) have tons on money in the bank from selling their homes (mortgages paid off years ago)

It’s the only way she can get an audience-captive! I wonder if she is trying to scam them for $$$

Oh, yeah. But sometimes we little old ladies can take only so much. I’d always checked “no” when in a hospital and asked if I wanted to see a chaplain. My ‘no’ was honored until a husband/wife tag team came to share the Good News.. I told them I did not want them and that my partner was visiting (holding my hand). When they started in with the gay thing, I told them to get out. If they didn’t, I would call the nurse. They left saying they’d pray for me. Both Jack and I shouted out “don’t bother.” I complained to the chaplain-in-chief and got lunch and an apology.
So, yeah. It’s proper and just to remind the jeebus shouters that not all of us believe what they do, that trying their conversion techniques on those who are restricted in their movement should NOT be treated as sitting ducks, and their assumptions are full of shit.
Totally on the old girl’s side.

Just more people who think this is the way they earn brownie points to get into heaven. They aren’t so much acting out of concern for others as they are out of fear for themselves because they can’t stand the thought that there might not actually be an afterlife.

But yeah, talk about a captive audience. Literally can’t run away from these goody two shoes who are only after getting brownie points with their god.

I had a coworker who constantly tried to “save” me. Told him I wouldn’t be another notch in his bible.

Do they get a toaster oven for every hundred people they recruit?

Xtians always think they have a willing captive audience in care facilities. On one of the occasions when I was admitted to hospital, I was eating my lunch and a priest came through the door, not knocking, and began to offer to pray for me. I had written on my admitting from that I was Atheist and wanted no religious affiliation. I told him to get the fuck out of my room and thew my Jello at him. What makes Xtians think that just because you are old, you want to be harassed by liars.

9 thoughts on “Televangelist: A “Demonized” Old Lady Screamed At Me”