In the mind of these people gay people not only shouldn’t exist but shouldn’t ever be seen or have rights.  These assholes claim as it is paid for by tax payer money it shouldn’t have gay people represented, well what about all the tax paying gay people who want to see themselves represented in government.  As a gay man why should I support museum art that depicts straight people kissing?    The idea that only right-wing straight ideas have a right to be shown in society is infuriating as it is more than clear there are other people in society.   That is the point of course the right-wing straight people want the rest of us ignored or publicly shamed.  Damn it the SCOTUS has said it is more than OK that a religious organization taking taxpayer money gets to discriminate against gay people who pay those taxes.    I am angry and sick of it.  Hugs 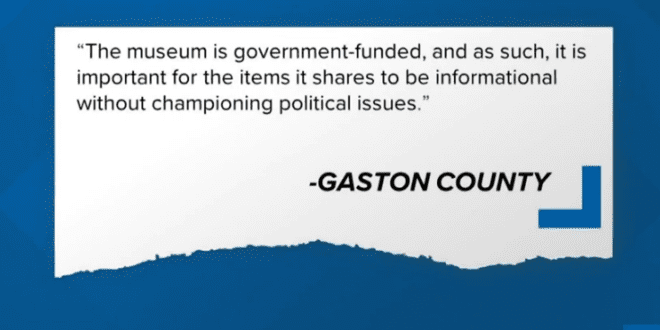 The photograph shows Justin Colasacco and his husband Bren Hipp kissing after Colasacco dropped to one knee and proposed in front of the crowd at the 2019 Charlotte Pride Festival & Parade. They married Oct. 4, 2020.

County Manager Kim Eagle told Gaston County Museum staff to have the photographer submit a replacement picture “that would be more considerate of differing viewpoints in the community.”

I love how they always frame discrimination against LGBT+ folks as “controversy.” Thanks for treating us like dirt again, media.

Paula • a day ago

Gustav2 Paula • a day ago • edited

When I was in middle school (then Jr High) I was sitting with a member of the WWII generation who grimaced and said, “Yuck.” when a Black male kissed a Black female on TV.

Guest Paula • a day ago

It’s like there is now a stampede to show who is most important intolerant of us.

They’re saying our existence is a political issue. That we can be denied presence, not access to but merely presence, in the public square.

“that would be more considerate of differing viewpoints in the community.”

By destroying differing viewpoints in the community.

Okay. How about this pic. They’re not kissing.

Len Ricci Ross • a day ago

What ever happened to Freedom of Expression??? Another reason why I won’t spend another tourist dime in the backward state of North Carolina.

They also made him remove a pic of a black woman being arrested for protesting a Confederate statue. And you can forget about contacting the County Manager or any of the commission members – the Gaston county’s website is devoid of all names and contact info.

Nic Peterson • a day ago

Supportive of the viewpoint that we not exist at all? That viewpoint?

Tor Nic Peterson • a day ago

Yes. That one. If art catered to the least common denominator, there would be no art.

In other words, “Get back in the closet you faggots!”

I’ve been hearing this loud and clear for a while.

But as Joe has been documenting, additional voices are literally screaming “line them up against the wall and shoot them in the head”.

It’s going to be a long, hot summer.