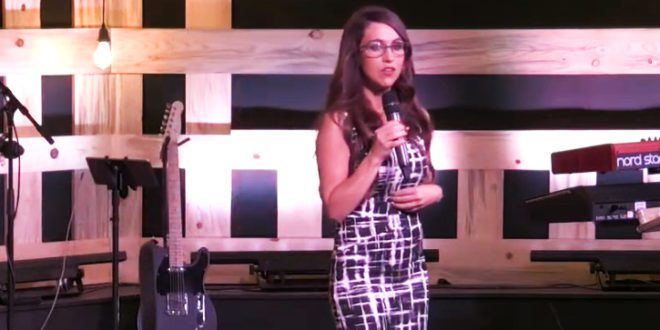 “The reason we had so many overreaching regulations in our nation is because the church complied. The church is supposed to direct the government. The government is not supposed to direct the church. That is not how our Founding Fathers intended it. And I’m tired of this separation of church and state junk that’s not in the Constitution. It was in a stinking letter and it means nothing like what they say it does.” – GOP Rep. Lauren Boebert, presumably referring an 1802 letter from Thomas Jefferson to a Baptist group.

Jesus said: “Again I tell you, it is easier for a camel to go through the eye of a needle than for a rich person to enter the kingdom of God.” (Matthew 19:24).

If the church directed government, there would be a 100% tax on rich people.

After stating “know your history,”Lauren Boebert claimed “there were Gatling guns” when the second amendment was written.

Fact check: The Gatling gun was invented in 1861, over 70 years after the Constitution was drafted. pic.twitter.com/Y0BHuO3yoi

If we had a functioning government, this would be grounds for expulsion from Congress (and no doubt not her first qualifying utterance). This statement violates her oath of office.

You’re right – the key word is a “functioning” government not a junta of 6 rogues on the Supreme Court!

Doesn’t matter how many times you tell them the Founding Fathers didn’t want America to be a theocracy they chime in with “show me where the words ‘separation of church and state’ are in the Constitution!”

Q: Are they stupid or lying liars?
A: Yes.

Some brave newsperson needs to ask her “which is ‘the‘ church?” Make her specify. Drill down. What flavor of which branch? Get to which version of ‘the‘ bible is the correct one as well. And definitely don’t let her get away with the garbage “Judeo-Christian” term, which is nonsensical anyway. One of those groups thinks the other is hellbound, the other thinks that the other folks don’t know how to read prophecy right. And it’s mostly used to ignore the third major Abrahamic religion in a rather deliberate way so they can be, pardon the term, demonized.

But knowing how the media works, I doubt such a brave interviewer will step up.

Makoto Gustav2 • an hour ago

Of course. Many of whom belong to churches which are hyper-evangelical, very conservative, and scary. And they never, ever want to admit which church they belong to, since it’s “a relationship” not “a religion” and other such garbage to avoid answering.

The Federalist Papers, the commentary at the time of the founding on the Constitution wanted as much separation between church and State as possible. Like even more than you’ll hear from people today.

Boobert is painfully wrong and so is SCOTUS in Bremerton.

So, Lauren, WHICH church/Religion is supposed to run the government? There are literally thousands of different Christian sects with different canons and beliefs, then there is Islam, Judaism, Hinduism, Satanism, Wicca, and so forth. Plus, many if the Founding Fathers were Master Masons, and many religions disagree with Freemasonry.

Mark Née Fuzz • an hour ago

This is what happens when you elect someone who flunked her GED courses several times before they gave her a degree out of pity.

You usually have to go to a Christian school to find someone as dumb as Lauren. Or a homeschool. Or some private school for rich children who will never have to work.

Just among Protestant Christians in the US, there are about 3000 denominations (not counting independent congregations). That’s about one per county (or county equivalent, looking at you, Louisiana, Virginia cities, and DC). Seriously, I think a lot of “under-educated” Americans have trouble imagining a country any larger than their school district was back when they lost their virginity and found alcohol.

7 thoughts on “Boebert: “Church Is Supposed To Direct Government””