We are watching as Florida and red states in general are fast becoming deeply and openly the home of racist bigoted white supremacist Christian nationalist and it is supported by the Republican party in charge.   Florida is becoming dangerous not just for minorities but for anyone that doesn’t follow the public demands of these gang members.    Let’s be honest, the Proud Boys is a gang of thugs that found official recognition / elevation as a public group by the former president who used them to try to overturn an election.   This was one of the gangs that tRump turned to that was willing to use violence to stop the will of the majority of the people.   This gang is a small minority supported by a larger minority called the Republican party because the gang is willing to use violence and threats of harm to force the public to live by the Republican dictates of returning the culture to 1850.   We have a minority political party so desperate to rule and retain power that they are willing to use force against the majority to do it.  Hugs 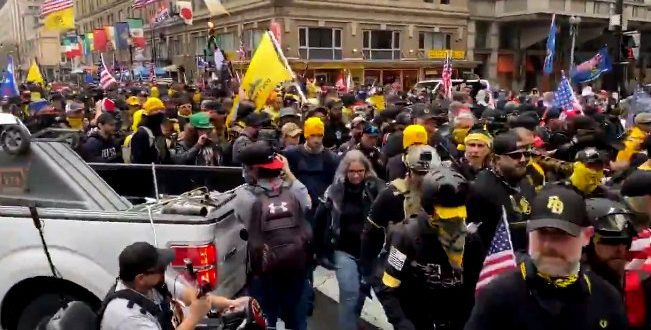 Newspaper opinion pages are often criticized for having a political bias, but one Florida paper showed the pitfalls of a poorly-executed attempt to tell both sides of the story.

An op-ed published on Sunday by the Sarasota Herald-Tribune defended local school board candidates’ alleged association with the Proud Boys by claiming the group’s members were simply “caring parents” who were being unfairly attacked for their conservative political views.

Oh, and the paper failed to disclose the author is married to a Proud Boy herself. To be clear, the Proud Boys have a documented history of criminal activities and violent altercations that date back several years.

I was going to excerpt the op-ed but in the time since I started this post, it has been deleted from the paper’s website. There’s a full screenshot here.

I'll be honest. I know Melissa a little. We have had pleasant discourse. But when fascism and white supremacy are denied, or worse revered, it's #fullstop. Her public FB profile is full of more than sympathizer posts, like this one. 3/7 pic.twitter.com/aNqarjc6Ti

Here she is waiving the flag of traitors. 4/7 pic.twitter.com/MBKXhgJaLj

Here is #fannypackpb, wanted by FBI, at the same protest flashing the white supremacy sign. 5/7 pic.twitter.com/4XkhYobAdr

This is the author’s husband. Another fact omitted from the piece without disclosure by the @HeraldTribune pic.twitter.com/SL85BRwd5j

How nice of Florida & the Sarasota Herald-Tribune to defend domestic terrorism.

This place is scum. Its the only place in all my world travels I ever got f@g bashed. The police also told me as the victim to let it go when I pressed for them to do something after I hunted down the truck of the guys who jumped me. After I told the police the plate number. After I told them the address the truck stayed parked at I was told to drop it. That place is full of rich old white money and very poor kept in their place black people. Fuck Sarasota. May a hurricane come and destroy the entire waterfront where the money is. All of it

The “Proud Boys – D.C. Street Sweepers” t-shirt tells you all you need to know. If members of BLM had attacked the Capitol on Jan. 6th, the author of the op-ed piece would have been singing a very different tune. She would have called them traitors and demanded they be executed. But since the insurrectionists were her husband and his White Nationalist friends she claims they were “caring parents” who were being unfairly attacked for their conservative political views.

“Caring parents” indoctrinating their kids with racism and a loathing contempt for their gov’t, society, and their neighbors.

I wonder just goes similar that op-ed was to what people wrote about the KKK a few decades ago.

* Not actually wondering. I’m certain they’re the same old shit if you just replaced “proud boys” with “KKK” and updated the cultural references