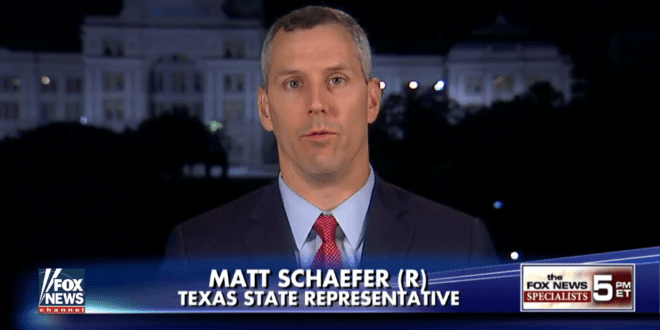 The Texas Freedom Caucus, a legislative caucus in the Texas House of Representatives, sent a threatening letter to a law firm with locations in Dallas and Houston that planned to reimburse travel costs for employees wanting an abortion. In the letter, which was addressed to Sidley Austin LLP, the 11 representatives of the caucus wrote that legislation will be introduced to impose civil and criminal sanctions on law firms that pay for abortion or abortion travel.

“We are writing to inform you of the consequences that you and your colleagues will face for these actions,” it said. The Texas Freedom Caucus said Sidley had aided or abetted drug-induced abortions that violate the Texas Heartbeat Act, a law that bans abortions at about six weeks of pregnancy. According to the letter, litigation is already underway to identify employees who may have been involved.

In February 2022 he appeared here when he declared that charging the parents of trans children with child abuse was “a hill we’re ready to die on.”

From the article at the link you can see they again are using the illegal but not ruled on by SCOTUS way of using bounty hunters / allowing anyone to sue.   In the abortion case they made it very profitable by those who sue but costly for those who get sued no matter if they lose or win, they still have to pay the costs.  Hugs

The proposed legislation will prohibit any employer in the state from paying for elective abortions or reimbursing abortion-related costs regardless of where the abortion occurs. According to these lawmakers, private citizens will be allowed to sue anyone who pays for an elective abortion performed on a Texas resident.

If passed, the law will grant The State Bar of Texas to disbar any lawyer who has violated any abortion statutes.

Free to do as they tell you to do.

S_E_P Nic Peterson • a day ago

Their freedom to tell you what to do is WAY more important than your individual freedom to live the way you want to.
All that shit from the reich about the libs and the “nanny state” was, once again for the billionth time, projection

It just seems so clear that their D opponents could find clips from these asshats saying opposite things. “We can’t tell private business what to do…until we do.”

Buford Joe in NM • a day ago

Moot point. Republican voters are OK with blatant hypocrisy from their elected officials, and independent/undecided voters are too dim to notice it.

Buford Reality.Bites • a day ago

Yep, and the most-obvious fact… that Republicans appear to favor candidates who are more adept at divisively trolling, insulting, and provoking others online than actually passing legislation which makes our/their lives better in tangible ways. That’s why we have assholes like Cruz, Gohmert, Boebert, and MTG in Congress.

Don’t forget: Any cases would be filed in Texas courts, up to and including the state’s supreme court.

In other words, don’t assume any good outcomes from any cases against this law firm or any other firm in Texas.

I’m not sure it would be any better at SCOTUS. ;(

Buford Joe in NM • a day ago • edited

Agree, which is the whole point here. The repugnant SCOTUS abortion decision was given a veneer or respectability by claiming that it merely turned the matter over to each state to decide, individually… and then the Republicans enacted laws to make it illegal for people to travel from one state to another to obtain the procedure.

While that clearly violates the intent of what the SCOTUS handed us, no one should be confident that the SCOTUS would defend a person’s right to travel to another state… and THAT is the danger of where we are today.

Host of Twinkies What, me worry? • a day ago

Not to worry. That would require permanent tracking of all women, total ban on all contraception, state line checkpoints and severe criminal penalties for all sluts. Just exactly like The Handmaids Tale. First, we have to stop women from having bank accounts and jobs. Next, we stop women from doing anything without their husband’s permission. Trans and gay women will be executed unless their ovaries are functioning; they will be sent to breeding farms.

S_E_P Host of Twinkies • a day ago

Only white women will be sent to breeding factories

Elagabalus • a day ago

So much for “small, limited government.” That was always a GOP farce just like “drain the swamp.”

Joe in NM Elagabalus • a day ago

I especially like when serving GOP members of congress say “drain the swamp”. Idiots.

TrollopeReader Elagabalus • a day ago

We’re the Government and you WILL listen to us and OBEY us.

Buford TrollopeReader • a day ago

They don’t want to lead… they want to rule.

crewman • a day ago

S1AMER crewman • a day ago

You’re talking about facts in a world dominated in much of our country by Republican fictions designed to stir up the base base of today’s GOP.

And if we let them get away with this, how long before they come after parents who don’t try to “change” their gay/lesbian kids?

Buford • a day ago • edited

Remember… in Texas, it’s considered child abuse to provide a teen with gender-affirming medical care, but not to force a rape-victim teen to carry an unwanted pregnancy all the way to a live birth.

One of those scenarios is plainly more traumatic and life-altering than the other.