At one point PETE HEGSETH says “They’re committed to telling the worst story of America …”  The fact that they can tell the worst parts means that those worst parts exist.  It is not made up fiction, but real history.    It tells you a lot about the right and the Republican party that they don’t want true history taught or know but they want a complete fiction of the worlds best most perfect country to ever be.   Why?   I think it is so people won’t realize how bad they have it in this country compared to other 1st world nations.   Think of the benefits the public have in those countries that the “world’s wealthiest country” can not afford or manage to do.   If we are so great why can we not do it here?   Could it be the corporations / wealthy don’t want you to figure it out and fix it which might cost them a bit of profit.   Greed and more profit is king, which leads back to why the south used slaves to build their entire economy.  Low wages and bad working conditions are a poor second to the profit slavery could generate.   Hugs 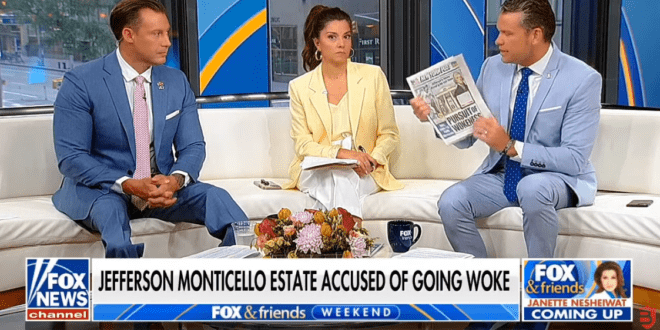 RACHEL CAMPOS-DUFFY: And after you leave the museum tour, which again makes you feel guilty and not so great about America, at the end there’s a gift shop where you can buy Ibram X. Kendi’s how to be a racist, how to not be a racist book —

JOEY JONES (CO-HOST): This is a racist human being who writes books about hating white people.

CAMPOS-DUFFY: Right, and all of these sort of books that are damning of America and suggesting that were still a racist country are for sale in the gift shop.

PETE HEGSETH: The funding and the people behind the foundation that runs it, all leftists, many tied to the 1619 project. They’re committed to telling the worst story of America and now they’re doing it inside the homes of the Founding Fathers.

CAMPOS-DUFFY: And those founders and the donors and the people who are on those boards, that is not a coincidence. This is a diabolical plan on their part to populate these positions that have influence over how America tells its story.

Sarah • a day ago

Wait until they find out what Jefferson did with one of those slaves.

Ross Sarah • a day ago

Charlie In SF Ross • a day ago

and then sold them to the highest bidder. And then wrote a letter to a friend bragging about it.

Slaves were bred in order for whites to get as much free labor as possible. (I’m sure you know this already)
The following is a must see documentary/lecture by Jeffrey Robinson:

Just watched this on Netflix. If you don’t watch the whole thing (super engrossing), find the clip where he talks to the man guarding the confederate monument in Charleston. Ho-ly shit, not only does he shut down bullshit lost cause theory eloquently and civilly, but you get to see the cognitive dissonance on the man’s face. Scary shit, as we will never get through to some people.

I’ve watched the entire thing and know exactly which part you’re talking about. The white guy is so proud of his hatred and ignorance. And you are absolutely correct.. there’s no getting through to some people.

Longpole Sarah • a day ago

A white guy banging a black woman. They are probably OK with that arrangement.
A black guy banging a white woman, that’s usually a different story.
But then there is Clarence Thomas. I suspect his political views give him a pass in this case.

crewman Longpole • a day ago • edited

They read sex as a power exchange, and the person fucking as the strong person and the other person as weak. So yeah, white men fucking a slave probably doesn’t bother them too much.

UiscePreston Sarah • a day ago

Who was also his wife’s half sister and was 14 when he first knocked her up at the ripe old age of 44. He went on to do it at least five more times.