They are here, and it is clear they support the right wing maga candidate DeathSantis.   These Nazis and racist are supported by the Republican party and over 100 republicans in the House of Representatives voted against investigating and removing Nazis out of the military.   These republicans in elected office protect white supremacist Nazis.   Why?  Because they have the same fascist goals, they hate the same minorities, they want an authoritarian government that lets them rule over those they look down on.  These are people that think Hitler had it right, and that South Africa’s apartheid was a good thing.   You want to keep a free country, a democracy, then we had better vote in every democrat possible and vote out all the republicans.   Hugs 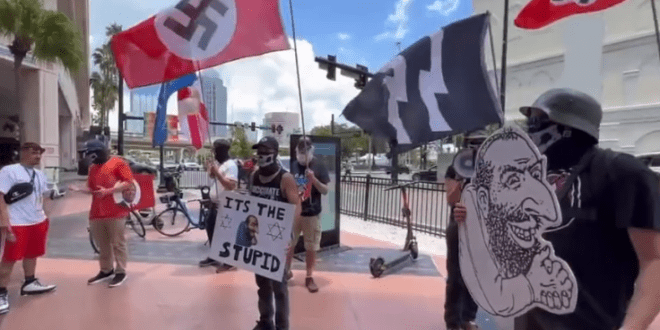 Calling it “an indefensible act of hatred,” the Florida Holocaust Museum sharply condemned demonstrations at the Tampa Convention Center where a group of neo-fascists waved flags with swastikas outside Turning Point USA’s Student Action Summit.

Inside the summit, Turning Point USA’s founder Charlie Kirk told a cheering crowd that there were 5,000 people in attendance. Kirk called Democrats the “invading, occupying force” in the U.S. and encouraged attendees to have lots of children to “outbreed” liberals.

The group distributed flyers, one of which said “every single aspect of abortion is Jewish.” The flyers say they were distributed by the Goyim Defense League, which the anti-defamation league describes as an extremist terrorist organization that was responsible for at least 74 anti-semitic propaganda incidents in 2021.

Turning Point spokesperson Andrew Kolvet told CL that TPUSA had no idea who the Nazi groups were or why they turned up outside the convention.

Florida has seen a rise in fascist activity in recent months. In Orlando, the Nazi group Atomwaffen assaulted civilians during a demonstration, and a neo-Nazi group made a bomb threat in Daytona Beach.

As they always do, Trump cultists are busy on social media claiming that the Nazis were planted by the FBI to make them look bad.

Nazis with anti-Semitic signs, Desantis sign and flag, outside the TPUSA event today, where Trump, Desantis, Hawley, Cruz, Greene, Gaetz and Boebert spoke: “We kicked all your n——s asses in Rhodesia. It was a race war in Africa between whites and blacks.” 🎥 @davedeckerphoto pic.twitter.com/2VVis0k5Y2

#WATCH | Fascist protestors with Nazi flags are gathered at the Tampa Convention Center, where #SAS2022 is being held. 📍

Flyers said they were distributed by the Goyim Defense League, which @ADL describes as an extremist terrorist organization that was responsible for at least 74 anti-semitic propaganda incidents in 2021. https://t.co/iY50e6qlAy

Nazis are NOT welcomed in Tampa Bay. People who believe in Nazi ideology feel emboldened by Ron DeSantis —we need to change that.

Little did I ever think I would live to see the day that this garbage would be on the rise again and marching in our streets. Have we learned nothing from history?

This IS the republican party, not a fringe element, but the core of the republican base. Even anti-trump republicans still support the party, just not trump as the messenger.