I want everyone to notice that the right delights in violence against those who disagree with them.   The rabid right wingers rushed into the crowd of protestors and attacked them.   To those who say we shouldn’t ever use violence notice the police refused to charge or arrest the right winger who was stealing protestors signs, attacking them, and proud of his violence on the left counter protestors.     The same guy was the one I posted who was so over the top sexually screaming at AOC.  So yes had I been in that crowd of protestors and one of these assholes tried to take my sign or fucked with me I would react very violently.   I would kick the shit out of them or go down trying.   I won’t turn and run from these assholes.   They used to attack gay people in gangs until gay people started kicking their asses.   That needs to happen now.   These right wing jerks want to start shit, we on the left have to be willing to hold our own and stop them.   Plus this bullshit of the police protecting the rabid right needs to be something everyone should complain about to the police, to the communities, to the people in charge.   Hugs 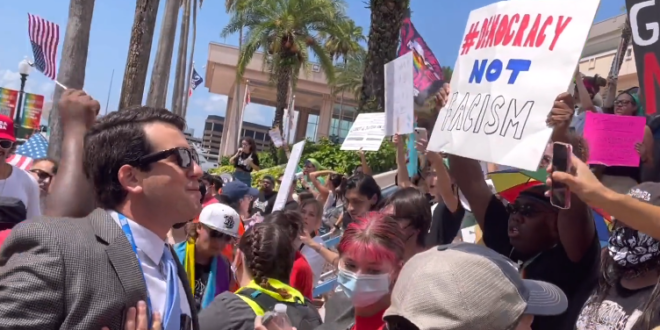 While thousands of conservative student activists cheered the words shared by some of the country’s top conservative leaders, including former President Donald Trump, at Turning Point USA’s 2022 Student Action Summit in the Tampa Convention Center, angry words were exchanged between young adults outside.

Hundreds of activists came out for a “Don’t Facist Our Florida” protest organized by Florida For Change, Tampa Bay Community Action Committee and Women’s Voices of SW Florida.

Alex Stein of Dallas, Texas, who broadcasts the program, “Prime Time 99 Alex Stein,” on Rumble and describes himself as a “professional troll,” was escorted from the protest area by police after he grabbed signs away from pro-life demonstrators while shouting, “Baby killers. You guy murder babies.”

TPD removed Stein from the crowd and one officer told him, “You can’t be physically fighting people,” but still refused to take action against him. When asked why TPD just let him go with little incident—even with several witnesses, victims, and video of him instigating—officer D.J. Rhodes noted that protestors were on the walkway.

Last week Stein earned national headlines for sexually harassing AOC on the steps of US Capitol, a stunt which earned him appearances on Fox News and multiple pro-Trump outlets. As you can see by his own clip below, Stein is quite proud of himself.

Chillin’ with the Protestors in Tampa @TPUSA #SAS2022 pic.twitter.com/4XbQn46EA7

Why didn’t someone mace him with the pepper spray combined with blue dye? That shit doesn’t come out for weeks. Parade that face on faux and other channels.

This is what DeSantis enables. Keep that in mind as he announces for President.

Election this fall is gonna be lit.
Be prepared.

Pssst, without a permit the walkway is where the protesters must be. There have been several tussles between protesters and police when someone accidently stepped off the walkway and into the street.

The usual suspects who fund everything Far Right Republican.

The circle of life.

Another example of a right winger who goes on air belching outrage over cancel culture leftists, who passes by peaceful progressive demonstrations and grabs signs and violently assaults people.