I do not support robbing people, but what Pastor needs such wealth?   WTF, how are these people helping those in need?   Seems they are only helping the Pastor and his family get really wealthy.   Hugs 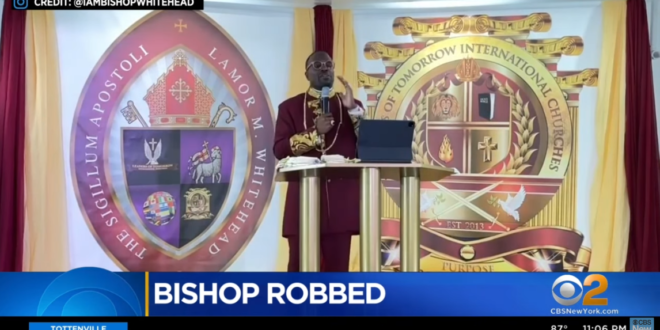 Three thieves were caught on tape barging into a Brooklyn church on Sunday where controversial bishop Lamor Whitehead — an ally to Mayor Adams — was preaching and snatched $400,000 worth of jewelry off of him and his wife.

Whitehead, the Rolls-Royce-driving bishop, was preaching at Leaders of Tomorrow International Ministry on Remsen Ave. near Avenue D in Canarsie about 11:15 a.m. Sunday when three masked bandits stormed into the church, the pastor and cops confirmed.

Whitehead made the news recently when he tried to orchestrate the surrender of the man accused of fatally shooting Goldman Sachs researcher Daniel Enriquez on the Q train, to the mayor. After alerting the media, he showed up at the precinct where the suspect was to turn himself in wearing a thick gold chain and Fendi blazer.

Three thieves robbed a Brooklyn bishop and his wife during a sermon. The masked bandits made off with $400,000 worth of jewelry. https://t.co/5HKRaxfg2S

The mayor keeps strange company. His friend Bishop Lamor Whitehead served five years in prison for identity fraud and grand larceny — then this week nearly negotiated the accused subway shooter’s surrender to the mayor himself

I’m calling it, no doubt in my mind that this is a stunt. Not an actual crime, but a planned event. Ok, so I don’t know that, but damned if I’ll trust anything a preacher claims.

TampaZeke • a minute from now

I’m feeling so foolish that I went to 10+ years of higher education when all I had to do to become shamefully rich legally was to become a religious bullshit artist with no education or skills other than conning and swindling.

The man is a fraud. Sadly this is typical of Mayor Adams’s circle of local support; remember he still has pastors in his administration who cavorted with the Kill The Gays crowd in Africa. I don’t feel sorry for his losing $400,000 worth of jewelry. Still, robbery is a serious crime and I never want to make light of it.

Well he shouldn’t have been laying up for himself treasures upon earth, should he. Prat.

The real question here is why and how does a pastor have $400,000 in jewelry?

Prosperity Gospel. You give money to reward God’s messengers and God will reward you tenfold. It’s very handy.