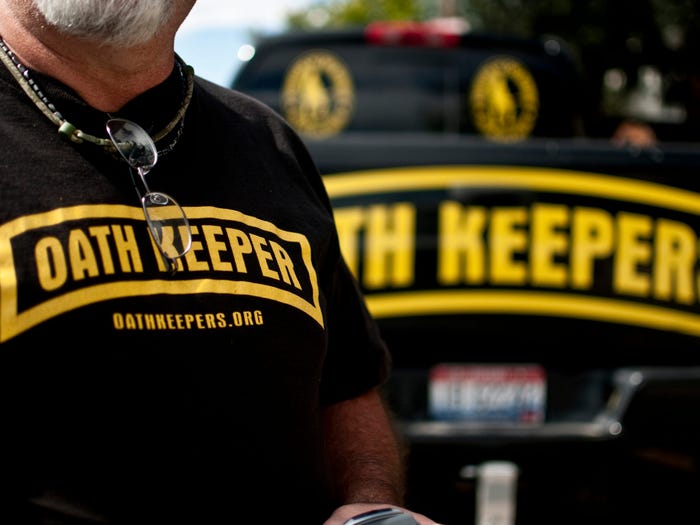 An Oath Keeper from Idaho in Bozeman, Montana. William Campbell/Corbis via Getty Images

While searching alleged Oath Keeper Thomas Caldwell‘s home following the attack on the US Capitol just three days prior, police found a “death list” that included the name of a Georgia election official and their family member.

But in court documents viewed by Insider, Caldwell’s lawyer, David Fischer, argued the list is a “doodle pad.”

“From the search, law enforcement recovered a document that included the words “DEATH LIST” hand-written across the top with the name of a Georgia election official, a purported family member of that official, and the county and state associated with that official all hand-written underneath,” read the government’s motion regarding trial evidence.

The document also included hand-written notes relevant to the defendants’ preparations in advance of January 6, according to the government motion.

“This document is not a ‘list’ but, rather, a doodle pad. The words ‘death list’ are written in all caps, whereas the balance of writing on the doodle pad is written in upper and lower case letters,” read the defense’s motion to exclude the note pad evidence.

“Moreover, the words ‘death list’ are separated from the names of the election workers by scribbled writing, and were clearly written with a different pen. There are no other names on the ‘list,’ because it is not a list. Importantly, the names written on the doodle pad were not, as the Government claims, election ‘officials’ but, rather, temporary election workers.”

Fischer added that because the evidence would “highly prejudicial” to the defendant, there is “no need” for it to be introduced to a jury.

Caldwell is one of nine alleged Oath Keepers charged with seditious conspiracy following the Jan. 6 attack on the Capitol. He is also charged with obstructing an official proceeding, destruction of government property, and unlawful entry on restricted buildings or grounds.

In its case against Caldwell, the government argues the Navy veteran — who once worked as a section chief for the FBI — holds a leadership role in the far-right anti-government militia called the Oath Keepers and was known to members as “Commander Tom.”

On January 6, Caldwell reportedly started a Facebook Live video taken from inside the Capitol building. According to charging documents, He also sent multiple Facebook messages to others reading, “We are surging forward. Doors breached” and “inside.” He described the experience as “storming the castle.”

Caldwell has denied being a member of the Oath Keepers, as well as all charges against him.

David Fischer, attorney for Caldwell, did not immediately respond to Insider’s request for comment.

Freeman and Moss are the two election workers, of course, who were the subject of extraordinary threats after Donald Trump, Rudy Giuliani and their allies falsely accused them of election fraud. Both appeared at a public hearing of the Jan. 6 select committee last month.