Please notice the hypocrisy.   He loves it when it is in his favor and helps his cult get their way, but if it is on something they are against he has to stomp it out hard.   He is a thug and a gang leader at this point.   He thinks he is a king of Florida.    Hugs 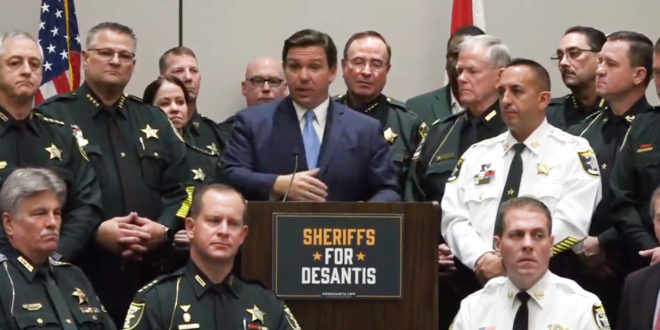 Hillsborough County State Attorney Andrew Warren isn’t the only elected official in Florida who has promised not to enforce laws he thinks are unconstitutional. Some elected sheriffs have suggested they wouldn’t enforce gun control measures, tapping into an ideology that sheriffs are the final arbiter of what is constitutional.

But that movement hasn’t sparked action from Gov. Ron DeSantis, who ordered a statewide review of state attorneys and their policy positions.

DeSantis suspended Warren on Thursday, accusing him of putting himself above the law by pledging not to prosecute women seeking an abortion from their doctor and vowing to protect transgender minors receiving gender-transition treatment.

The so-called “constitutional sheriffs” movement recently held a convention in which they vowed to surveil ballot drop boxes and polling places. One of the leaders of the movement, Michigan sheriff Dar Leaf, was today implicated in the breach of county voting machines.

“All you have to do is Google ‘Florida sheriff not enforcing,’ and there are so many examples, mostly related to guns … If this is the game you are going to play and tell me it’s not political, you better start suspending those people, too.”https://t.co/1xGRcPqukj

republicans believe they are in charge of everything and everyone and our democracy is simply a temporary inconvenience to them.

I cant decide if Hypocrisy or Hate is the 1st rule in the rethuglikkan ethos.
Or is it Cruelty?

Paula • a minute ago

If they can enforce only the laws they want and make up their own laws, they are not much more than a pack of vigilantes. That is not legitimate law enforcement and don’t need to be obeyed. Let’s see how they like that.

Ron DeSantis is a fascist, and he and the movement he represents are a clear and present danger to this country. That needs to be said again and again.