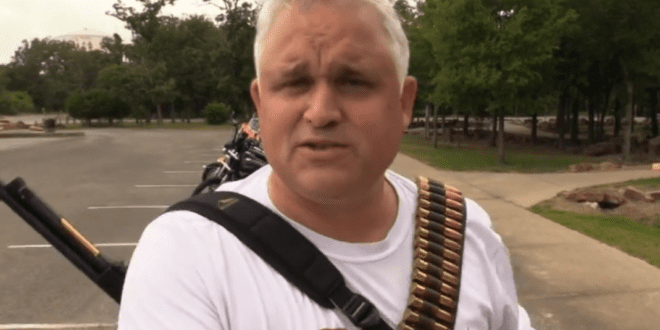 The Texas comptroller said the state has opened an investigation into a Dallas bar that held a drag show for children earlier this summer.

In a statement released Friday, Texas Comptroller Glenn Hegar identified himself as one of many Texas parents who found themselves “disturbed by the recent images showing children participating in a drag show in the Dallas area, including one of a child placing money in a performer’s undergarment.”

Hegar’s announcement came one day after Republican state Rep. Bryan Slaton [photo] called on Hegar to treat Mr. Misster as a “sexually-oriented business.” As Slaton explained, “Sexually-oriented businesses are required to pay $5 per attendee present and they must also prevent children and sex offenders from attending or participating.”

Slaton, who is fond of making public appearances carrying an assault weapon and wearing a belt of ammunition, first appeared on JMG in March 2021 when he introduced a bill making abortion a death penalty crime for doctors and even women who undergo the procedure.

Earlier this year he introduced a bill requiring genital exams for trans athletes in public schools.

As I reported in June, extremists mobbed and attempted to enter Mr. Misster during the show, hurling abuse at children and parents.

The State of Texas is evaluating the tax status of a Dallas bar that hosted a “Drag the Kids to Pride” event in June. If determined to be a “sexually oriented business” after hosting the event, the bar would owe $5 per entrant under state law. https://t.co/08Qf19n0Hk

An ugly protest today. A mob of self described “Christian Fascists” tried to force their way into a gay establishment in the gayborhood of Dallas holding a family event while chanting “Groomers” pic.twitter.com/2F9NE4rs0P

This video, shared by Andy Ngo, shows the terrifying moment a man who stated: “I’m a Fascist, Not a Nazi” charged at a family with two young children leaving the event.

Antifascists blocked his path and he attempted to barrel through them. It’s unclear what he intended to do. pic.twitter.com/ISw31zUMcf

As usual the backward asses wants to make something funny as something stupid. And there are people out there who has no idea of the entertainment that Drag shows give. Just another way for the right wing assholes to turn communities against us.

If only children hadn’t been forced to attend this drag event. Oh, wait …

So, parents shouldn’t take their kids to these events, being irresponsible, BUT must be informed if their kids come out, or have related issues.

These backwards assholes have no idea what a drag show it. Their heads are so far up their asses it’s unbelievable.

Exactly. It’s so frickin ridiculous. ‘Entertainment should only be what we the State believes is proper’. The GOP has thrown out western values.

What about “Parents RIGHTS”????

They use that falsehood to Ban Books and teaching TRUTH inSCHOOLS.
So, if a parent wants to take their kids to a Drag Show, do they NOT HAVE THE RIGHT to DO SO???

but that’s how fascism works. you change your behavior to meet the expectations.

Right. First they get drag queen story time canceled, then all drag shows, then they’ll work on getting all gay bars closed (a child might walk past one!) and all LGBTQ content expunged from TV, movies, and the Internet. Think of the chilllldrennnnnn!

If we really want to appease them, we all need to stop existing ASAP. Because our existence is what triggers those delicate snowflakes’ feeeeeelings more than anything.

In the video, I’m noticing a column of cop cars – yet not a single cop is present in the confrontation. WTF?