This is the republicans telling you who they are.   He doesn’t want democracy but minority rule with him part of the rulers.    He doesn’t see everyone as equal, he doesn’t want the land of the free.    Republican candidates are showing us that they are the crack pot Qanon conspiracy believing haters and bigots.  Also he wants to enforce his religion on everyone to force them to live by his church’s doctrines.     We all should be worried because the maga base loves these crazy nuts.  What about all that support the troops and back the blue slogans?    Hugs 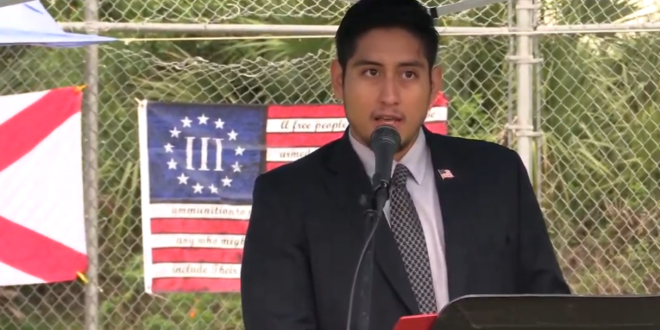 “Under my plan, all Floridians will be able to shoot FBI, IRS, ATF, and all other federal troops on sight,” Miguel tweeted. “Let freedom ring.” Miguel told Florida Politics Friday the suspension, which is “permanent” per a message he got on his Twitter app, “doesn’t affect (him) at all.” He stands by the proposal, which he says is justified because the IRS has been “weaponized by dissident forces.”

His posts are still live on Instagram, where he also defends the Confederacy and calls himself a “proud Christian Nationalist.”

Miguel first appeared on JMG last summer when he held a rally calling for the release of “political prisoner” Capitol rioters.

In the final clip below, Miguel declares that the next presidential election “will not be decided at the ballot box, but on the battlefield.”

I'm sorry to have to post this, but this man is running for office in my area. It's real. And it's dangerous. I believe we must turn the mirror in on the lies being used to stir up people for heinous purposes. Someone is going to get killed. My heart is broken. @matthewjdowd⁩ pic.twitter.com/Qxn17gAviz

GOP candidate for the Florida House suspended from Twitter after he advocated shooting federal agents. https://t.co/QEpb0jFdWC

The Republican party is becoming a domestic terrorist organization.

Miguel is a graduate of…(wait for it!)…Brigham Young University, did two years preaching Mormonism in Tijuana (as if Tijuana hasn’t suffered enough), advocates secession from the US, etc, etc, etc.